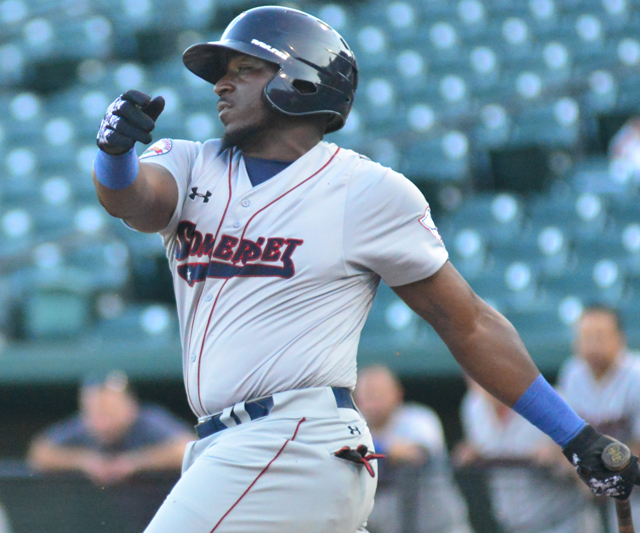 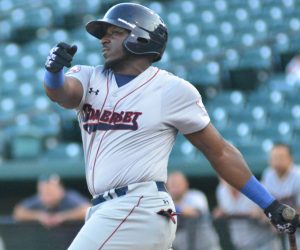 Waldorf, MD – The Somerset Patriots (23-17) used a five run fifth inning to edge the Southern Maryland Blue Crabs (13-26) 5-4 Wednesday evening at Regency Furniture Stadium. The Patriots clinched the series and moved back into first place with Long Island dropping a contest to Lancaster.

Southern Maryland starter Brian Burres had retired 11 in a row but he unraveled as seven straight batters reached base for Somerset in the fifth inning. Yovan Gonzalez sliced a single then Rob Kral worked his team leading 19th walk. Trayvon Robinson then clubbed a three-run home run (5) to put the Patriots in front 3-0.

“I really made an adjustment with my eyes,” said Robinson who hit three homers all of last year but has nearly doubled that this year. “My eyes were wandering all over the place and I swung at two pitches that were near my back foot. I just said I have to keep my eyes steady and look for a pitch up. On the 2-2 pitch I was calm and made the most of the cookie I got.”

Somerset would add a pair of runs in the inning on RBI singles by Scott Kelly and Mycal Jones.

Jamar Walton clubbed a two-run home run (5) in the sixth inning that cut the deficit to 5-2.

Southern Maryland added two more in the eighth inning to pull within one run as Walton drilled an RBI double and another run crossed home via a wild pitch.

“I was determined to come out and have a good showing after the mishap in my last start in York,” said the southpaw. “I just wanted to attack. I was able to get off on my front side a little bit better and get some downhill movement towards the plate.”

Burres (3-3) suffered the loss as he yielded five runs in six innings of work. Jon Hunton notched the save (9) as he stranded the tying run at second base in the ninth inning.

The 2016 Somerset Patriots season presented by Ford continues on the road until the team returns to TD Bank Ballpark on Friday, June 3rd for a 7:05 p.m. game against Bridgeport Bluefish. For tickets, call 908-252-0700 or visit www.somersetpatriots.com. Download our Mobile App for free in the Apple or Android App store.