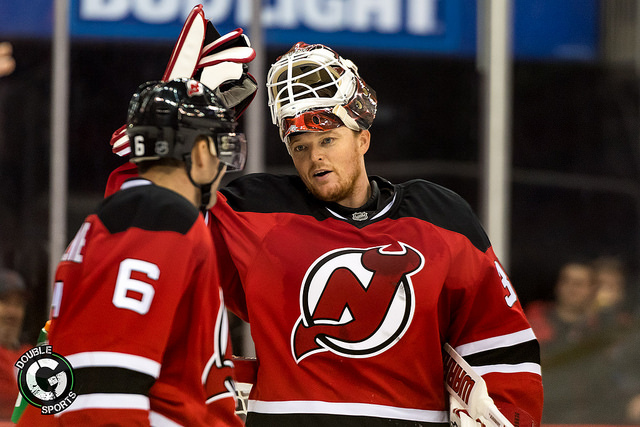 After the disappointing shutout loss to the Senators on Thursday the weekend series with the Islanders was holding a lot of weight. Playing at the Rock on Saturday and in Brooklyn on Sunday, this was their first meeting of the season. These two games had the making of a Subway series especially since the fans can get to each other’s arenas very easily and they are very vocal!

The Rock was electric…personally it was the most excited I had seen fans for most of the season. From the National Anthem to the whistle to end the 3rd the Devils Army was in full force. Islanders faithful tried to sway the Rock’s energy their way and came close with a loud “Let’s Go Islanders” chant but that couldn’t swing the outcome. The Islanders lost 3-2 to the Devils.

That was a big two points for the Devils who are looking to stay alive in the playoff race. Coach Hynes even said that it felt like a playoff game, “This is the benefit of playing in this game tonight. It was a playoff type atmosphere it was a hard game against a team that is really fighting, this is where we grow.”

At this point both the Devils and Islanders are currently vying for the last wildcard spot that is held by the Toronto.

Let’s face it Devils fans were riding high off that win Saturday and felt confident that Sunday would give us the two points to tie the Islanders and be so close to a playoff spot. But just as they giveth, they takeith away. Sunday saw a 6-4 loss to the Islanders in Brooklyn.

So, what went wrong for the Devils? Simply they were out played on Sunday. The Islanders looked better, skated better, fought better…and that is how they won.

The Devils looked tired, they appeared to be slower than the Isles in getting to the puck.

Corey had 10 straight starts before getting a rest yesterday…that is 25 days since Kinkaid was on the ice last. Compare that to the Islander’s Berube who played started a week ago. While they are both back-ups and need to be ready when called upon that much time really dulled Kinkaid…he even said he was not sharp.

The Senators are back at the rock on Tuesday and the Devils need to answer their game from last Thursday with a W. It’s that simple. They need this to stay in the race.

Tuesday, they need to play with intensity of Saturday’s game. They need to remain physical and finish hits. They have to play as though it is a playoff game…in fact they have to do that from now until the end of the season if they want to play in April.

Right now, Toronto holds the last wildcard spot with 65 points, the Devils currently have 60 but are 5th in line for that spot. The only way for a Metropolitan Division team to make it in the play-offs is to win a wild card spot….the top three teams cannot be caught.

It’s Hockey! Keep Your Sticks Down!
NWHL Sprint to the Isobel Cup