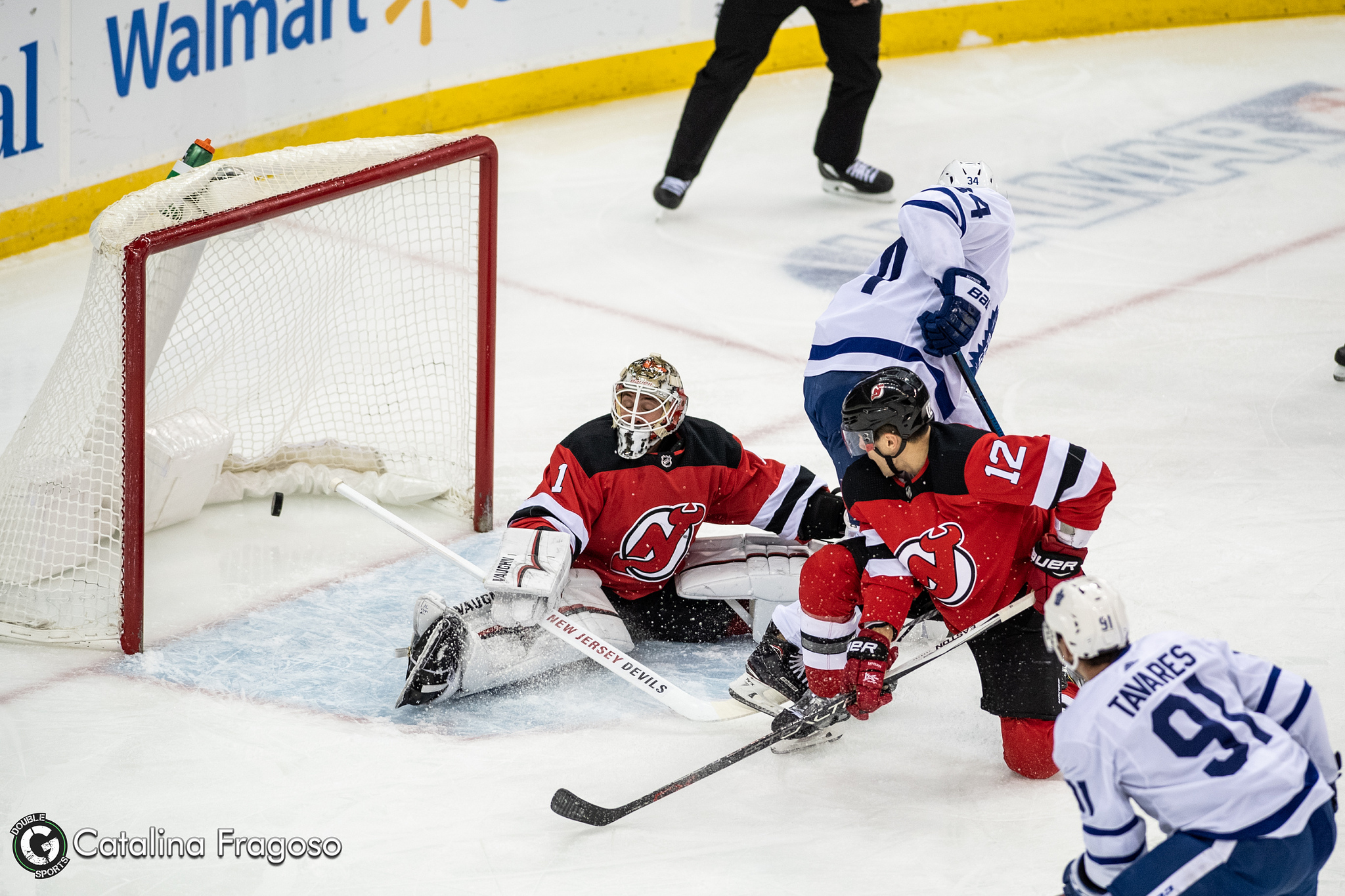 December 18 is a big day in New Jersey, it’s Brian Boyle’s birthday…it is also New Jersey’s birthday (it become the 3rd state to ratify the Constitution on this date).

Fans flooded the Prudential Center on a chilly Tuesday night to see their Devils take on the red-hot Toronto Maple Leafs. Their last meeting with the Leafs ended in a 6-1 loss in Toronto.  However, the cold Tuesday night in Newark was just as chilly inside the Rock. The Devils fans could not muster any strength when it came to cheering on their team. New Jersey fell quickly to the Eastern Conference 3rd place Maple Leafs.  They were never able to gain a lead on this scoring machine from Canada at any point during the night.

Taylor Hall was dressed after sitting out Friday and Saturday and being listed as day-to-day on the injury report. Steven Santini has yet to make a start since coming off the IR on December 1.  Cory Schneider was placed on the IR Monday and Mackenzie Blackwood was called up.

“We continue to fight, we continue to grind” flashed on the jumbotron, words from John Hynes as the Devils took the ice.

While the Devils got the early opportunity to score with a power play at 1:15 after Zach Hyman got 2 minutes for holding.  They were not able to convert. The Devils were not able to even register a shot-on-goal during the PP.

Mirco Mueller might be the unsung hero of this game as twice in the first period he was able to block/divert shots taken by the Leafs.  He seemed to be the only Devil who was able to interject themselves into the Leafs passing and shot taking.

Beginning of the End

Blake Coleman was called for hooking on former Islander John Tavares.  Just as Coleman’s penalty was expiring Nico Hischier had a great breakaway opportunity that was thwarted as the Leafs were are able to get the puck. They skated down the ice 3-on-1 with Tavares finally getting it passed Keith Kinkaid and putting them up 1-0 early in the first.

The Leafs second goal came with controversy as Hynes challenged for goaltender interference.  The decision to challenge was based on Auston Matthews pushing Damon Severson into Kinkaid. In my opinion, that is interference but the rule is very subjective.  The argument being that Severson was actually the person who interfered with Kinkaid. The refs did take a very fair amount of time reviewing but there was not enough to support the challenge.  The faithful in the stands could not even muster a “Refs You Suck” chant.

Hischier got called for holding at 10:20 giving the Leafs their 2nd PP of the night but they were not able to convert.  The Devils did show a little bit of grit after Hischier’s penalty. It ended as quickly as it came when Patrick Marleau put the Leafs third goal in the net.

Then a spark of hope came as the Sami Vatanen, with help from Boyle, got the Devils on the board with just over a minute left.

Just over a minute into the second, the Leafs scoring continued as Andy Greene tried to stop the puck as it took an ugly bounce behind Kinkaid with no luck.  The fans seemed to be as quiet as church mice as they looked at their team falling 4-1.

Both the Devils and Leafs got PP opportunities in the middle of the second.  Kyle Palmieri received 2 minutes for high-sticking and William Nylander for tripping.  Both teams were able to kill their respective penalties. Late in the second Ben Lovejoy, while trying to stop the Leafs, collided with Keith Kinkaid that lead to a stoppage in play and the trainer coming off the bench.  He evaluated Kinkaid and made sure he was ok to continue playing.  During the press conference following the game, Hynes said Kinkaid was not injured.

Palmieri had a great opportunity with a hard shot on Frederik Anderson but he made a textbook glove save.

The bleeding did not stop, the Devils went down 5-1 with .8 seconds remaining in the period. This caused the Leaf fans to erupted with their chants (almost making it seem like this game was being played across the border).

To start the third Hynes opted to pull the struggling Kinkaid.  Blackwood replaced him even though he has had no professional ice time on his resume to this point.  He was tested in the first minute of play by Tavares and made a great block.

For most of the third, the Leafs took it easy on the struggling Devils.  Even with Blackwood in goal, the Devils could not find their a rhythm or a scoring chance.  That changed with just over five minutes left in the game.  Hall was able to wrap the puck around to a waiting Hischeir who put it in the net.

Yet, just as the Devils chipped away at their deficit the Leafs scored on Blackwood as he gave up his first NHL goal.   With 1:30 left in the game the Maple Leafs were able to get their second past Blackwood.  The game ended shortly after the 7th goal by the Maple Leafs.

Devils did better in the faceoff department.  It has been an area they have struggled with, often being at the bottom of the NHL statistically.

The old adage that defense wins championships seems to resonate here.  The Devils need to figure out their defense. Stopping the opposing team can not rest solely on the goaltender, their needs to be a solid defense in front.  Personally, I would like to see Mueller and Will Butcher together more as both have good instincts and can be playmakers.

Blackwood gave some life to the team but he is only 22 and Tuesday was his first test in between the pipes.  Kinkaid is starting to show signs of wear and tear of an everyday goalie. It is not entirely his fault though, Schneider is too shell-shocked to play well anymore.  This leaves Kinkaid without a reliable back-up. Could Blackwood be it, possibly, but it might be time to look at who is on the wire around the league.

Also, let’s stop with the Taylor Hall trade talk. Also the “is going to re-sign” this summer if not traded.  There is still a lot of hockey to play and overall this is a young team in the middle of a rebuild. YES, they made the playoffs last year.  However, that was really a hard-fought season that ended up in their favor.  Nine times out of ten that same team would miss the playoffs.

Up next, the Devils will go on the road to take on the Columbus Blue Jackets on Thursday Night.