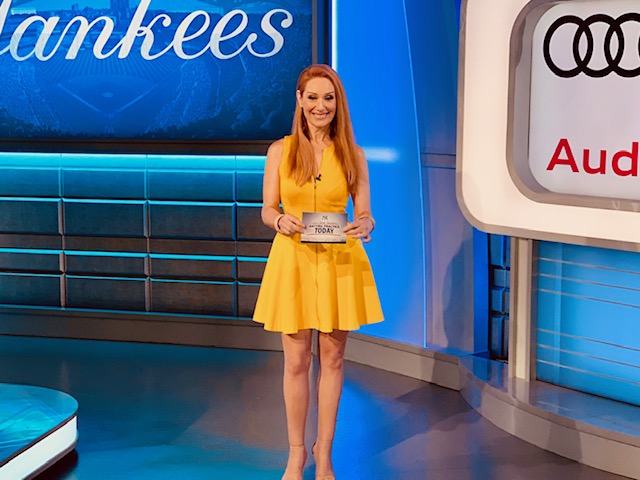 A Conversation with Nancy Newman: “We Are All a Yankee Family”

Last week Double G Sports had the opportunity to speak with Emmy Award-winning YES anchor Nancy Newman. Newman is the host of Yankees Batting Practice Today presented by Audi and Yankees Magazine. She joined YES in 2003 after holding a variety of sports broadcasting positions with CNN and NBC. Yankees Batting Practice Today aired Sunday, July 26 at noon. It airs an hour before each Yankees broadcast on YES.

I interviewed Nancy Newman the day before Opening Day, and her anticipation for the beginning of the season was evident.

“I’m really excited, relieved, happy, and appreciative,” she said. “I never did lose hope, because I always felt that somehow, some way, they would find a way to play.”

Just like the fans, Newman paid close attention to the highly-publicized negotiation issues that, in conjunction with health concerns caused by the coronavirus, delayed Opening Day by four months. Throughout the rollercoaster of negotiations, eternal optimist Nancy never lost hope.

“I was watching it intently, like most of us. [Now] we’ve made it this far; it is Opening Day tomorrow. I had great belief in the process, and I also have great belief in the Yankees, and their ability to navigate and offer their input as well. I’m a hopeful and optimistic person, so that is why I look at it in that way.”

One major difference in the return of baseball from the other major sports is the location of the games. Major League Baseball teams will play home games in their own ballparks and travel as a team like normal, as opposed to the NBA bubble or NHL hub cities.

Nancy and I discussed MLB’s approach and how she thinks it will all pan out.

“It remains to be seen, and it will be a work in progress, no doubt about it,” she said. “There’s no right or wrong approach. I applaud all the leagues for every effort taken. I think they’re all watching each other, and taking notes from one another. Everyone is working together.”

Besides the location of games, something on the mind of every fan this year is how teams will try to maintain safety amongst the spikes of COVID and the ever-changing protocols put out by local officials. The past few days, the Miami Marlins have already experienced an outbreak, causing their series against the Orioles to be postponed.

“It’s going to be a lot about responsibility and accountability to your teammates.”

New rules have been instituted for the shortened season, such as the universal designated hitter, a runner placed on second at the beginning of extra innings, and–perhaps the most difficult for the players to adjust to–no spitting on the field and dugout.

Nancy Newman thought the shortened season could serve as a litmus test for some of these experiments, but she was as perplexed as the rest of us when it came to guessing how the players would adhere to the no-spitting rule.

“That’s beyond me!” she laughed. “It’s a time for experimentation, so let’s jump on the experiments now. I like the 30-man roster to begin the season, I think that’s the only way to go. The taxi squad [players who can serve as immediate replacements for injured or COVID-infected players], alternate training site…all necessary. Like everyone, I’m looking to see how beginning extra innings with a man on second works out. But I also understand you do not want to wear your guys out in this extremely unique situation.”

The experiments don’t stop with just the players.

Nancy gave her take on some other additions by the league to contribute to the normalcy of the season. She added that she thought the idea of cardboard cut-out “fans” was hilarious, and the piped-in crowd sounds could help the players by giving them a taste of normalcy.

Although there are several changes, the Yankees are keeping traditions. This season they will continue honoring members of their family who have passed. They will be wearing commemorative patches for Hank Steinbrenner, who passed away on April 14. The patch will be a black oval with Hank’s initials HGS in white and will appear on both home and away jerseys throughout the season, including the postseason should the Yankees make it that far.

Life at YES During the Pandemic

Daily routines at the YES studio located in Connecticut have definitely changed amidst the pandemic. They are taking precautions like most offices across the nation.

“We are limited with the number of people allowed to be in the office,” Nancy Newman explained. “Everyone is wearing masks and there are sanitation stations all over the place. My role as host had been more remote but now I will be in studio, just with fewer people. “

Yankee Stadium provides the broadcasters the ability to socially distance while still being able to communicate easily with each other.

“The press box area and the broadcast booth are very unique. The partitions are part glass and part wall, so even though you may be sitting in separate broadcast booths, if you’re in the front row you can look to the right and the left and see into the next booth.”

Predictions on such an unorthodox season are certainly tough to make. Teams will need to grapple with a whole set of obstacles aside from the typical on-field decisions.

“The unknown of a 60-game season is deep on so many levels,” Newman said. “Something interesting that Aaron Boone said a few times was that the team that mentally handles the new protocols will put themselves in the best position to succeed in this atmosphere. We know talent usually wins out, but this year there are so many other factors.”

When it comes to the Yankees, Nancy Newman is excited for this year’s team.

“I do believe that the Yankees have enough talent to edge out the Rays for the AL East title. I’m really happy about this team; they looked terrific in the few exhibition games. They are locked and loaded and ready to go, and I know that they’re focused.”

Back in March, the Yankees had expected a handful of their key players, including Aaron Judge, Giancarlo Stanton, Aaron Hicks, and James Paxton, to begin the season on the injured list. With the delayed start, they are now a more complete team.

“He is the real deal! I was at the press conference where he was introduced. He blew most of us away that day, saying things like, ‘Pressure is a privilege.’ He is a willing leader, teacher, and student of the game. Just an outstanding human being from everything I know so far. He wants New York. There’s not a challenge he wouldn’t love to face. It’s really impressive.”

Throughout our conversation, Nancy’s excitement as a baseball fan naturally shone through. She spoke about sharing fans’ excitement for the return of baseball, while discussing how the pandemic has touched her, professionally and personally.

“My heart goes out to everyone who has suffered, and I certainly pray for our perseverance as a human race. I’m glad that baseball is back to serve the purpose that it does for everyone in their own unique way.”

Sports fans naturally have bonds with one another. Nancy feels it, too.

“We are all a Yankee family. I know that sounds cliche, but sports truly do bond us. That is one of the reasons I chose it as my profession. I am excited, I’m hopeful. I believe in the process, and I can’t wait to start walking down that road.”