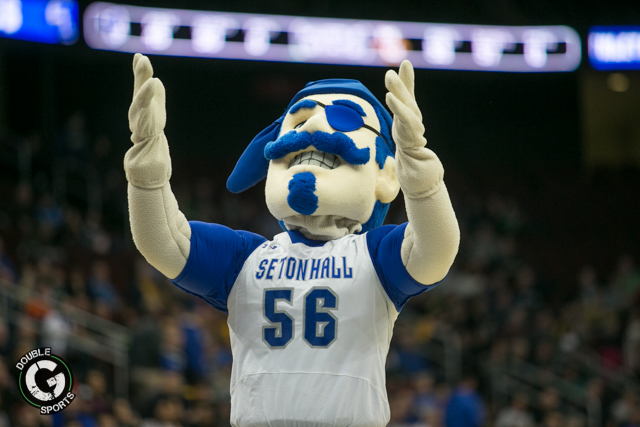 A frisky Seton Hall upsets ninth-ranked Kentucky at The Garden

When the Pirates of Seton Hall walked into Madison Square Garden on Saturday afternoon, they knew they were walking into a fight. The thing about fights, sometimes they bring out your best and that’s exactly what Seton Hall found out at the Citi Hoops Classic.

After hitting just three of his first 17 shots, Myles Cale drilled a 3-pointer with nine seconds left in overtime to lift the Pirates past ninth-ranked Kentucky 84-83 — stunning a Fox national audience and 10,244 jacked-up fans at the world’s most famous arena.

The play crystallized the resilience of a Pirates’ squad that took a whopping punch — a half-court buzzer-beater that forced the extra session — and fought shorthanded as three guys fouled out down the stretch.

“We’re really gritty,” Cale said afterward. “We’re not scared of the name on your jerseys. We’re going to go at you.”  Cale struggled with his shot all game but when he needed to nail the big bucket, he was ready.

“Coach always tells me to be ready . . . because you never know when the ball is going to come your way,” said Cale.

This marked Seton Hall’s first non-conference win over a top 10 opponent since a victory over sixth-ranked Ohio State on Super Bowl Sunday 1992. It was the third-ever meeting between these programs. Seton Hall is now 2-1 over the Wildcats.

Myles Powell scored 25 of his 28 points after halftime for Seton Hall (6-3), including a tiebreaking 3 in the final seconds of the second half.  Powell hit an off-balance three with 1.5 seconds left to put Seton Hall up 70-67.

Powell’s shot appeared to steal the moment and seal the win as the shot of the year in college basketball. That was until Kentucky’s Keldon Johnson caught the ball at mid-court and sank a prayer as time expired to tie the game and one-up Powell for the rights to overtime.

However,  Cale’s game-winning three had the last laugh to hand Kentucky their second loss of the season.

”It took a lot of effort, but … we were ready,” Powell said. ”We fought, we never gave up, we stayed together and we got the job done.”

The Pirates took the fight to Kentucky and a lack of shooting exposed the ninth-ranked Wildcats all game long. The team’s lack of perimeter shooting was exposed. Kentucky went 5 for 20 (25 percent) from 3-point range, including 0 of 6 by Tyler Herro.

The Wildcats entered with the best rebounding margin in the nation, an advantage of nearly 17 per game, but only managed a 39-35 edge against the feisty Pirates. Simply put, the Pirates slowed down the pace of the game and made the Wildcats work for everything they got.

The only bright spot for Kentucky was PJ Washington. The big fella led all scorers with a career-high 29 points. He also snagged 13 rebounds and was 12-of-13 from the free throw line.

PJ not only did work on the offensive end, but he was a beast defensively. He recorded three blocks and made life miserable in the paint for Seton Hall. The Pirates’ frontcourt scored only 25 of their 84 points.

The Pirates pulled off the upset for a big resume-builder in their toughest test yet as they tune up for Big East play, which begins Dec. 29 against St. John’s. After making three consecutive trips to the NCAA Tournament, including a win over N.C. State last season, Seton Hall is trying to duplicate that success with a new group led by Powell.