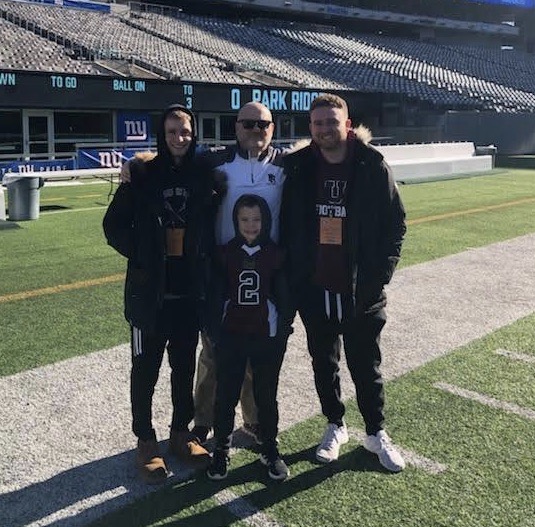 Growing up in New Milford, New Jersey, Angelo DeSalvo enjoyed playing a multitude of sports. There was football, baseball and basketball, and by the time DeSalvo reached New Milford High School, he added running track to his repertoire.

“My dad always promoted sports and to get involved especially in football and baseball,” said Angelo DeSalvo.

DeSalvo took his father’s advice and began to play football for his high school. And DeSalvo saw the program’s reputation shift over the years as legendary coach Rich Conti took over the team.

“I played for Rich Conti who sadly has since passed away, and when he took over that program it was not very good. I think my eighth grade [year] they had won their first game in four years,” DeSalvo reminisced.

But it wasn’t just Conti who played an integral role in the program’s new success. DeSalvo credits the camaraderie as another key part.

“We were a bunch of guys [Jack Chaplain, Scott Jacob, Ralph Orta, Nelson Lin, Mike McSherry, Rich Govan, Rich McCarten, Danny Polan, Brandon Flanagan] that played recreational football together and it was a different time,” said DeSalvo. “We all stuck around and stayed together and had a lot of fun. We won a bunch of games in two years, sectional championships in ’85 and ’86 and great memories.”

Over the next few years, DeSalvo moved around to various high schools to grow his coaching career.

In 1995, he joined Passaic Valley High School as an assistant coach under the direction of Head Coach Chet Parlavechio. Moving on to a new opportunity in 1998, Angelo DeSalvo was also an assistant football coach for Indian Hills High, a place where he and Mark Aramburu reconnected.

“The three coaches that were the most influential in my career were Mark Aramburu, Chet Parlavechio, and Al Deaett,” DeSalvo explained. DeSalvo used to take his team to Deaett’s football camp at Glen Rock. He combines his knowledge from all three of those coaches to model his program after today.

“I learned a tremendous amount of defensive football from Coach P. Coach Deaett is a great x’s and o’s guy and leader. I still ask for advice today.”

A New Era at New Milford

Coming full circle in 2000, DeSalvo was named the head coach of the New Milford Knights football team. In 2001, DeSalvo led the team to the most wins in school history with ten.

“I had just gotten the job and Athletic Director Steve Purciello said your first game is against St. Joe’s by the Sea of Staten Island,” DeSalvo described. “I had never heard of them and had to go to make a film exchange at a rest stop on the New Jersey Turnpike. They were a big school but I think we beat them 32-0 and ended up 7-3,” said DeSalvo.

The following year was when DeSalvo and his team went 10-1. That team lost in the semifinals, but DeSalvo still thinks highly of his two years as head coach.

“Looking back over the course of my career I have to say the two most fun years I had as a coach were at New Milford. I went to high school there and became a teacher and head football coach. A lot of the players I still keep in touch with. Every coach on the staff was from New Milford and grew up there,” said DeSalvo.

The tight-knit New Milford community meant a lot to DeSalvo. It allowed the program to improve with the investment of coaches and players. DeSalvo noted he would have loved to stay their for the remainder of his career, but it was his drive that pushed him forward.

“I was looking for bigger and better things.”

In 2002, Angelo DeSalvo made the short hop over to River Dell High School in Oradell, New Jersey to coach the Golden Hawks for two years. While there, he reunited with former New Milford teammate and assistant coach Brandon Flanagan.

“I went to school with Brandon. He was the baseball coach, and assistant football coach,” said DeSalvo. “I have fond memories there.”

Two years later, he returned to yet another familiar place: Passaic Valley High School. DeSalvo flourished in the system, coaching the Hornets for five years. In addition to his head coaching duties, DeSalvo started teaching history and remains in that position today.

With Passaic Valley, DeSalvo remembers the family atmosphere. In fact, one of his former players, Max Wassel, is now the head coach of the Hornets.

After spending five years with Passaic Valley, DeSalvo coached off-and-on between 2009 and 2011, returning to sidelines as an assistant coach for Bergen Catholic and Emerson High School, where he worked with Nunzio Campanile and Dave Murphy.

“I think Nunzio is one of the best coaches in North Jersey. To coach at the highest level of high school football in North Jersey and against Tony Karcich and Greg Toal was quite an experience,” DeSalvo said about his time with Bergen Catholic.

Soon after his time with Bergen Catholic, DeSalvo reconnected with one of his former assistants, Dave Murphy. Murphy has become the head coach of Emerson High School.

DeSalvo took one more year off in 2014, but once 2015 hit, he was back in the mix. He was appointed offensive coordinator at Park Ridge High School under Head Coach Tom Curry.

DeSalvo once coached against Curry when he was a player. But at Park Ridge, they joined forces and coached together.

“I had always known Park Ridge on the outside looking in and the kids were so receptive to the change in the system,” said DeSalvo. “We had a really good year and were the North 1 Group 1 that ended up getting upset by Cresskill in the first round of the state playoffs 35-34 in overtime.”

Another opportunity opened up for DeSalvo in 2018. This time around, he took over the role of defensive coordinator for Park Ridge.

Despite the larger amount of preparation DeSalvo has before games as a defensive coordinator, DeSalvo stills loves every minute of it.

“To get back to those roots is very rewarding and see the results pay off.”

Park Ridge made significant strides in 2018 going 9-2. They reached the North 1 Group 1 state sectional final where they lost to Butler 35-28. This past season, the Park Ridge Owls registered the most wins in school history with 11, all while winning their first state championship since 1995. This state championship came after defeating Hasbrouck Heights 21-14 in the North 2, Group 1 Final.

“We felt pretty confident going in from top to bottom and there was no team in the conference that was going to give us a really tough game,” remarked DeSalvo. “We got to the NJIC Playoffs and had a tough one against Cresskill. That turned out to be a good thing for us going into the state playoffs, we faced a big and physical team in Wallkill Valley and were able to handle them.”

“It was appropriate for our season to end at MetLife with a Vince Pinto pass to Wagner,” DeSalvo said. Pinto had gone down with an injury early in the season, and the program hadn’t won a championship since 1995. Talk about full circle.

This was DeSalvo’s first sectional championship since entering the realm of coaching high school football in 1992, and he credits Curry’s leadership throughout the season.

“Tom (Curry) does a great job of focusing the kids on a weekly basis, he kept the mentality the whole year not to get too far ahead.”

Some Things are Greater than the Game

More importantly, winning the first state sectional championship title meant so much to the community and high school. Team manager Matty “Ice” Gray was honored during halftime against Cresskill during the regular season. A New York Giants player surprised Gray with tickets to the Super Bowl and honored the memory of former coach Gary Mioli.

“Matty Ice Gray is really a key part of the whole program and he’s been around since I started coaching at Park Ridge in 2015,” Angelo DeSalvo explained. “Matty was there as a student manager, then he graduated, and we kept him on as an assistant coach. I was thrilled for Matty to have an opportunity to go to the Super Bowl.”

“Chris Brown is one of the best athletic directors I have worked for, and I have worked at a lot of schools,” said DeSalvo. I can’t compliment him enough and job the entire athletic department does. Coach Mioli was one of the great guys in Bergen County and I remember when I first became a head coach at New Milford in 2000. One of the first calls I got was from Gary welcoming me to the league. Bringing that championship to Park Ridge felt so good for him and his family.”

When the offseason begins, the work continues. Angelo DeSalvo is already preparing for the upcoming season. But before then he’s working to prioritize both coaching and his family.

“You win a game on Friday night and then bring the kids in on Saturday morning,” Angelo DeSalvo explained. “I would drive up to Schenectady, New York to watch my son’s team and on Saturday night, I would be in a hotel room watching film for the next opponent. I don’t have even 12 hours to enjoy a victory.”

Despite the hustle and bustle of coaching football, DeSalvo finds the time to spend with his family. He resides in Emerson with his wife Danielle and four children Angelo (20), Aidan (18), Dominic (9) and Lucia (7).

“My oldest son is going to be a junior at Union College and plays football,” said DeSalvo. “My middle guy [Aidan] just graduated from Emerson High School and is a basketball/lacrosse player.  I have a nine-year old who is playing football, basketball and baseball… My daughter is still trying to figure it out,” DeSalvo said with a chuckle.

“My wife is unbelievable. She is so committed to it. One of the best things winning this year is the fact all my three sons were able to be on the field at MetLife. When they were younger they were at every practice, scrimmage and 7-on-7.”

For a career as long as DeSalvo’s, it never gets old.

“I still love it after 27 years and I don’t see the end anytime soon.”

Check out my last feature here.

A Timeline of Negotiations Between the MLB Owners, Players
Motherhood in the #Wubble