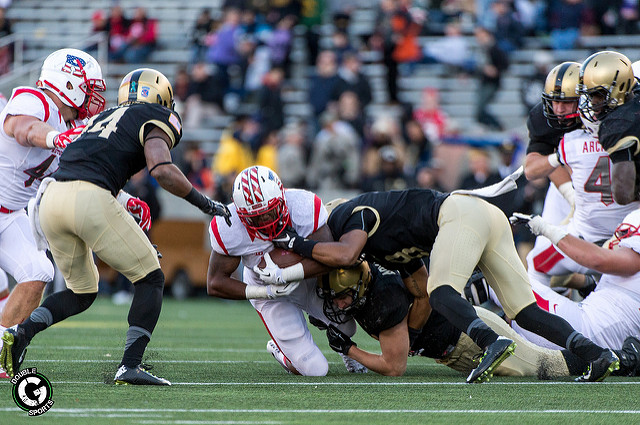 Head coach Jeff Monken and the Army football team have announced seniors Ahmad Bradshaw and John Voit as the co-captains for the upcoming 2017 season.

Bradshaw is the go-to-guy in the Black Knights’ triple option formation. Army’s rushing offense was the second best in the FBS last season. Bradshaw was a large part of that; he finished the 2016 season with eight rushing touchdowns and averaged almost 70 yards per game. The Chicago native shared the quarterback job with junior Chris Carter. Carter throws more than Bradshaw; Carter threw for 176 yards and two TDs. However, Bradshaw will serve as the team’s captain, which will increase his playing numbers.

During the 2016 season, the Army run defense ranked in the top 20 nationally. This was due in part to the prior year’s two co-captains:  linebackers Andrew King, who will help coach the team’s defensive players, and Jeremy Timpf. King led the team with 58 tackles and assisted on 38. Voit is a threat to opposing linemen. Last season, he tallied 26 tackles. Against rival service academy Air Force, Voit had a game-high seven tackles. He also was voted the team’s defensive and special teams MVP.