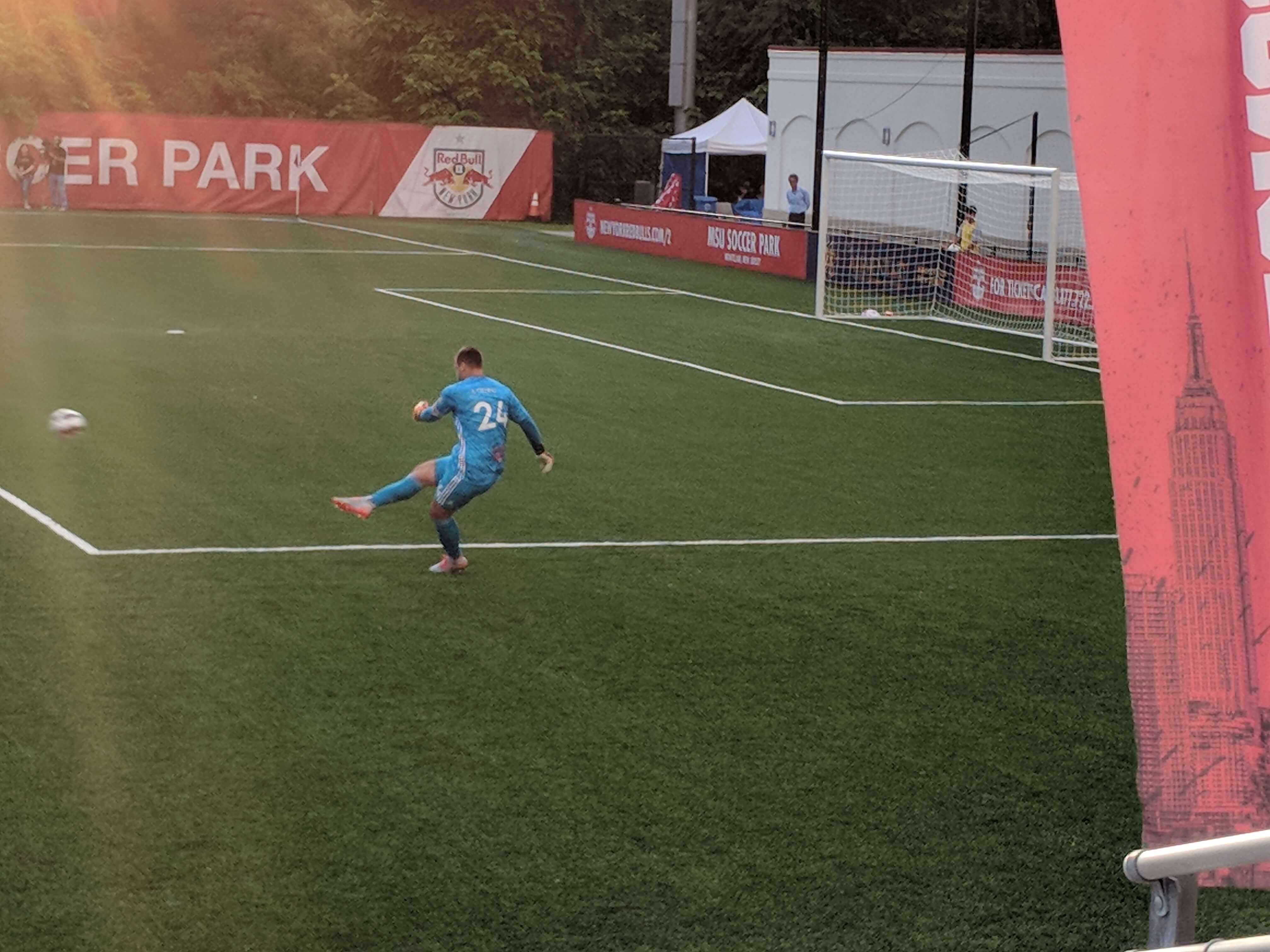 Baby Bulls Stampede Past Saint Louis and Into First-Place

The Baby Red Bulls suffered no hangover after defeating United Soccer League (USL) Championship Eastern-Conference leaders, Tampa Bay Rowdies two to nil last week. On the Baby Bulls, it is a different hero who steps up to secure the win every night and tonight at MSU Soccer Park we witnessed a new hero rise.

The Red Bulls first goal came in the 33rd minute. Midfielder Jared Stroud stood with the ball at his feet about 25 yards out and in the center of field. Stroud spotted forwards Sebastian Elney running into the eighteen-yard-box and played a perfect through ball into Elney’s path. Elney dribbled the ball and took a shot with his right foot that flew past the keeper – into the upper right corner of the net.

In the 55th minute, the Baby Bulls had a free kick about 25 yards out and to the right of goal. On the ensuing free-kick, Baby Bulls’ midfielder Vincent Bezecourt crossed to the back-post. Defender Preston Kilwien was left unmarked at the back-post, but headed the ball wide.

In the 86th minute, the Baby Bulls broke free on the counter-attack. Stroud collected the ball in his own half and played a through ball into the stride of Bezecourt. Bezecourt tipped the ball past a defender and went streaking in on a breakaway. STLFC midfielder Oscar Umar caught up to Bezecourt on the edge of the eighteen-yard-box. Umar made a one-footed challenge for the ball, and it was not clear if he made contact with Bezecourt, but Bezecourt went down and Umar was shown a red card.

The Red Bulls II were awarded a free-kick just outside the eighteen-yard-box. Bezecourt took a slow looping shot off the cross-bar and the ball fell right on the goal-line. Who else but Elney was there to clean up the rebound for his second of the match.

Forward Sebastian Elney discussed what it felt like to score the team’s only two goals in an important victory that catapults them into first-place.

“I’m excited, so honored to be part of organization,” Elney said, “It’s a big win big one for the club. We’re going to keep trying to keep on climbing. Keep on getting points.”

In their last five matches the Baby Bulls have won all of their games at home, outscoring opponents 12-1. On the road they have defeated Bethlehem Steel FC 4-3 and tied Memphis FC 2-2. It is clear that the Baby Bulls have dominated opponents on their home pitch. However, they do not carry as much momentum into road matches.

Head coach John Wolyniec explained how his team has improved as the season wears on.

“This year, as far as getting the system down, you know, some of that has to do with some guys that we kept from last year. Some of it has to do with the new guys buying in quickly. And, you know, I think we’re, especially on the defensive side, we just seem to have come together earlier and figure things out early in the season than we normally do.”