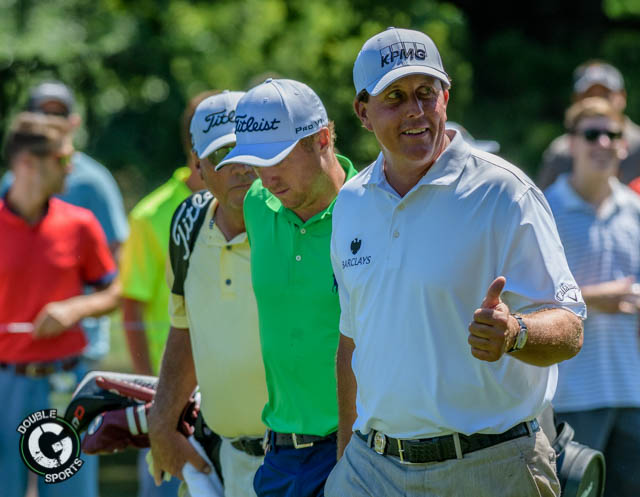 I will be providing daily notebooks of bits, nuggets, thoughts, and information throughout PGA Championship Week here at Baltusrol Golf Club in my hometown of Springfield, New Jersey:

McIlroy making memories for Traden:  On Feb. 23, Traden Karch, 13, of Tulsa, Oklahoma, was fighting for his life, slipping into a coma for three weeks, after being a passenger in a serious car accident. Today, Traden was among the 75 PGA Junior League Golf players on-hand at the PGA Long Drive Championship, at Baltusrol Golf Club, meeting Rory McIlroy and his other golf heroes. As Karch began his recovery, he received a surprise video message from McIlroy, who is a PGA Junior League Golf Ambassador, encouraging him to get well soon. In addition, McIlroy invited Traden to meet him at the PGA Championship. Along his way to Baltusrol Golf Club, Traden has also met with Philadelphia Eagles Quarterback Sam Bradford, played a round of golf with 2015 Junior PGA Champion Brad Dalke and rejoined his PGA Junior League Golf Team in Broken Arrow, Oklahoma.

“This is one of his very first memories,” explained his mother, Amanda Karch. “He doesn’t remember anything from before. He’s a miracle. I am so grateful to the PGA and Rory McIlroy for everything they have done for us.” A year ago, Traden played on Team Oklahoma for his golf coach Pete Chimarys, PGA, on one of eight All-Star teams from around the country that advanced to the PGA Junior League Golf Championship at Disney World Resort, in Lake Buena Vista, Florida.  (Courtesy PGA of America)

Did you know?: Dating back to Davis Love III’s 1997 win at Winged Foot, the PGA Champion has emerged from the final round’s last pairing 17 times in 19 years.