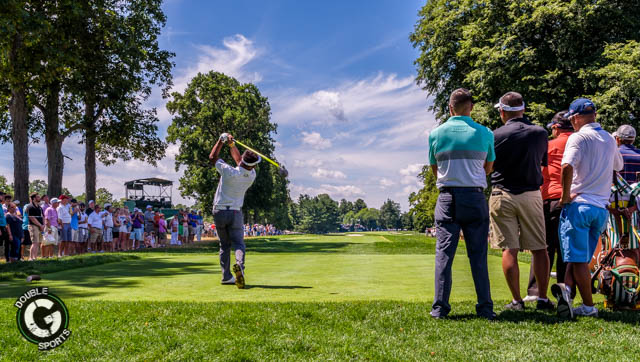 Good Morning! The first round of the 98th PGA Championship has started here at historic Baltusrol Golf Course in my hometown of Springfield, New Jersey.

Dreams do come true: There are 156 golfers in the field for the PGA and one of them, Brad Lardon, decided to use some local knowledge.

On the bag for Lardon, who hails out of Santa Fe, Mexico and is making his third PGA Championship appearance, will be 18-year-old and recent Delbarton graduate and player Griffin Carroll. Carroll’s father, Bill, has been a member at Baltusrol for eight years and through mutual friends and another Baltusrol member, the connection with Lardon was set.

Standing near Baltusrol’s practice green on Wednesday after, the soon-to-be Vanderbilt-bound Carroll was all smiles.

“This is awesome. You see what these guys do from a whole different perspective. It’s been an amazing experience,” Carroll said, who has played golf for the past five years and caddied for three.

Lardon, who flew in Monday night and played 18 holes each on Tuesday and Wednesday, has a 1:55 p.m. first round tee time this afternoon from the 10th tee with K.T. Kim and Peter Malnati. Earlier this month, Lardon was named director of golf at The Club at Las Campanas in Santa Fe.

So if you see a striking red Taylor Made golf bag in that group, you now know who will be holding the strap.

The USA way at Baltusrol: 15 of the 16 Championships conducted at Baltusrol since 1901 have been won by Americans, with the lone exception coming in 1903, when a Scot by the name of Willie Anderson won the U.S. Open on Baltusrol’s Old Course. (Courtesy PGA of America)

Thank you, Chris Nowak: Nowak, a retired Marine Corps Corporal and current PGA HOPE Coordinator, served as PGA TOUR professional Jim Herman’s back-nine caddie during Tuesday’s practice round at the 98th PGA Championship at Baltusrol Golf Club. Nowak, who lost his right leg during a friendly fire training incident, is in New Jersey coordinating a series of PGA HOPE (Helping Our Patriots Everywhere) events in conjunction with the PGA Championship. PGA HOPE is the flagship military program of PGA REACH, the charitable Foundation of the PGA of America. The program, fully-funded by PGA REACH and offered at no cost to Veterans, introduces golf to Veterans with disabilities in order to enhance their physical, mental, social and emotional well-being. (Courtesy PGA of America)