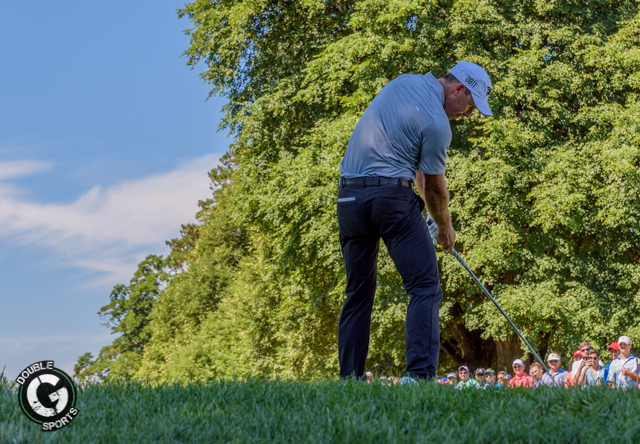 Holy Streb!: Robert Streb, who fired a sizzling 7-under 63 in the second round becomes the 28th player ever to shoot a 63 in a major championship.

Streb, Jimmy Walker in unique company: With today’s 4-under 66 performance by Walker and Streb’s historic score, Walker and Streb both tied for the lowest 36-hole score in PGA Championship history (131),

Walker fired a 5-under 66 and Streb fired a 2-under 68 in Thursday’s first round.

Robert Streb (-9) (on Saturday): “I’m sure it will be busy, Saturday at a PGA, but I just have try to stick to what I’m doing. Try to do the same things we’ve been doing the last couple days, and hopefully it’s good enough.”

Emiliano Grillo (-7): “My game is right there. I made some good putts yesterday and today. It’s going to be an interesting weekend. I’ve never been in this situation, and I’m not afraid of it. I’m going to go out and enjoy it.”

Jason Day (-7): “I kind of gave myself a little bit of a kick in the bum, especially with the double bogey on 7. It was a bit of a mess there. With that said, being able to come back and birdie 8 and 9 really made things a lot better for me on the back side. Just kept on setting myself up for opportunities. Even when I was kind of out of position, either in a fairway bunker or just in the rough, I had perfect angles. So that was quite nice.”

Henrik Stenson (-6): “I’m going to stick to my game plan. The work I did with my caddie earlier in the week, we put a plan in place on how we think we play the course the best for myself and my game. And that’s worked pretty well, so I’m sticking with the same plan and just try and keep on plodding away and give myself plenty of chances, and hopefully take advantage of them when they arise. Not going to do anything different, really.”

Stenson gets hotter: The Open Champion Henrik Stenson fired a second straight 3-under 67 Friday. Stenson has now had 30 rounds in the 60s for the year, including six straight, dating back to the Open Championship (68-65-68-63-67-67).

Patrick Reed (-5) (on crowds from New York/New Jersey): “They are great. They really get into it. I was surprised with how many fans were actually out here early this morning with the weather. You know, early morning on a Friday, it’s raining pretty hard, we’re starting out on 10, pretty far out there. And there was a good crowd right when we started. They are a bunch of troopers. They come out there and they are ready to go. They really get into it and are really enthusiastic about all the good golf shots we hit. Never heard so many people cheer about The Ryder Cup in my life, and we’re a long ways away from it.”

Martin Kaymer (-5): “I started not the way I wanted, to be honest, even though it was very tough today. I started with a couple of bogeys the first three holes. I knew I didn’t need to worry too much. I hit the ball fairly solid. It was just a matter of time that I create birdie chances, and they came. I couldn’t make all of them, obviously, but in the end it was very important for me to finish the way I did, to still shoot under par round or under those conditions because the golf course was definitely a little bit harder to play today. I think I placed myself in a very good spot. Who knows where the leader is going to be by the end of the day. I shot a good score yesterday, a very good round today. So it’s a good position to be in in a major championship.

Jordan Spieth (-3): “I’m hitting the ball fantastic. I just can’t get a putt to go in outside ten feet. And from ten to 20 feet, the amount of opportunities I’ve had that aren’t that difficult, up to my putting standards I would be 5, 6, 7 strokes better right now. It feels like it’s a bit of a struggle adapting line and speed control on the greens. Inside of ten, I made quite a few good birdie putts today to get me in contention. I’m striking the ball beautifully. Driver went a little astray, but overall I feel like I’m in a good position to make a run, I just need a couple good rounds.”