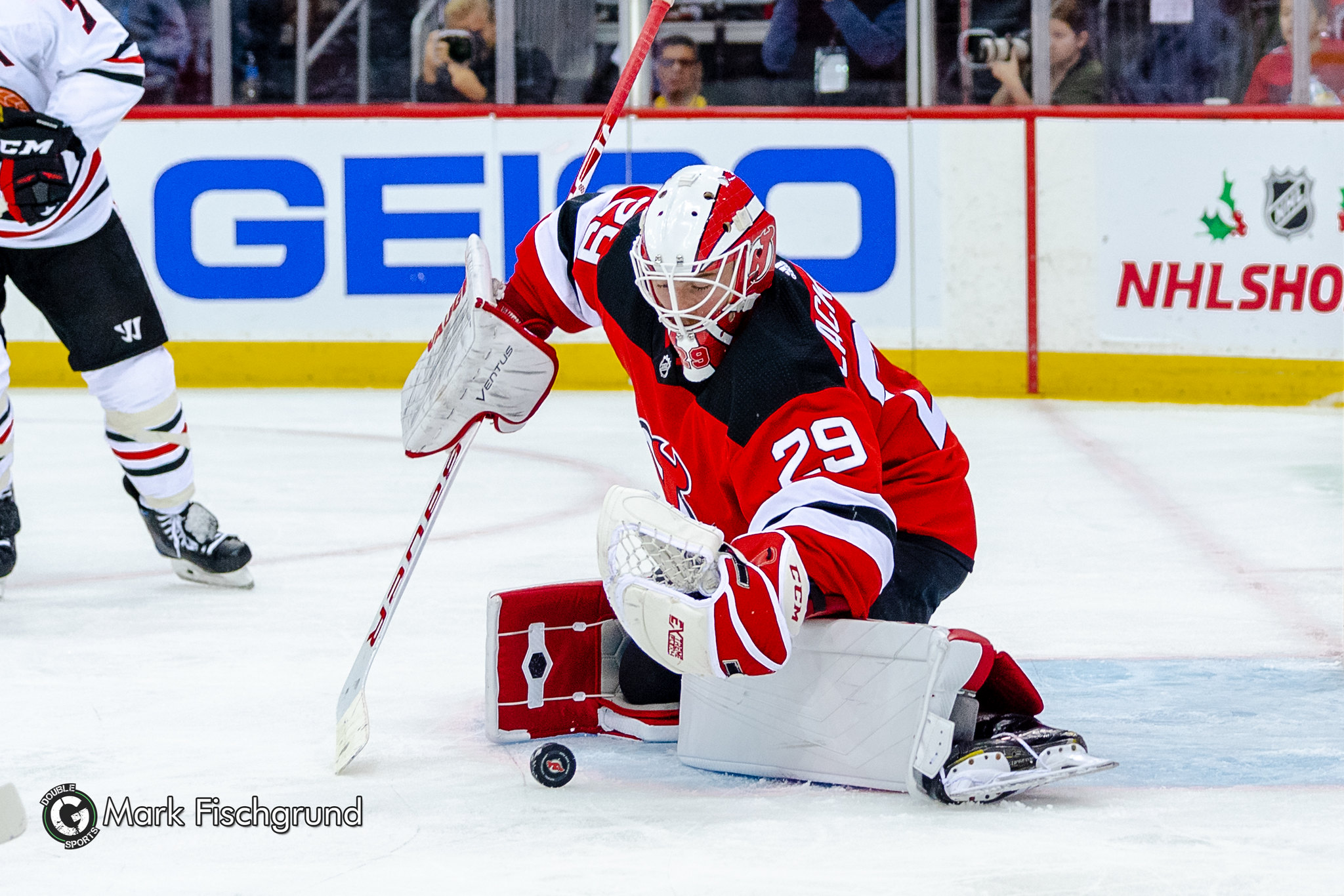 Blackwood stands tall but Devils fall in shootout at The Rock

The Devils fell to the Chicago Blackhawks. 2-1, at Prudential Center on Friday night.

On Star Wars night, the New Jersey Devils hosted the Chicago Blackhawks at the Prudential Center. After missing three games due to injury, #1 overall-pick Jack Hughes returned to the Devils lineup. It was just the second game the Devils have played since firing their head coach John Hynes on Tuesday.

Right off the bat, it became clear that the goaltenders for both teams were at their best and that this game would be a defensive battle.

Early in the first period, Jack Hughes created the first scoring chance for New Jersey. The 18-year-old took a hard wrist-shot that Crawford nicked with his blocker. However, the puck then bounced in the air and fell right on the goal-line. No Devils were able to claim the rebound and the game remained scoreless.

The Devils would have their chance to get on the scoreboard. New Jersey got their first power play when Chicago’s Alex Nylander was flagged for delay of game at 1:19. On the power play, the Devils moved the puck well. Nikita Gusev took a slap shot that was saved by Corey Crawford, but the Devils could not capitalize on their first man-advantage.

At 15:39, Wayne Simmonds skated the puck down the boards and floated a backhand pass towards the front of the net, where Pavel Zacha was headed. Blackhawks defenseman Calvin De Haan then took down Zacha and was called for interference. On the ensuing power play, the Devils again were unable to score.

At 12:30, the Blackhawks’ Zack Smith was called for elbowing. The Devils went on their third power play just eight minutes into the game.

This time, New Jersey would capitalize on the power play opportunity. Devils defenseman Sami Vatanen passed to Nikita Gusev, who one-touched a pass back to Vatanen. Vatanen then passed over to Taylor Hall, who leaned into a heavy wrist shot that beat a screened Corey Crawford and put the Devils ahead 1-0 at 13:31 of the first period. It was Hall’s fifth goal of the season and his second on the power play.

Mackenzie Blackwood came into tonight with an 8-8 record but showed he is much better than his record suggests. The 23-year-old from Thunder Bay, Ontario put together a 27-save performance highlighted by his two breakaway saves to deny Chicago’s Brandon Saad.

Late in the first period, Blackhawks winger Brandon Saad went in on a breakaway and deked quickly to his backhand, but Blackwood closed his pads and kept the Devils in the lead. The Devils, thanks to Blackwood’s timely save, held a 1-0 lead after one period of play.

In the second period, the Blackhawks stepped up their level of play. 2019 number three overall-pick Kirby Dach was a menace in front of the net for Chicago. The 6’4 Dach was hard to move out and had a chance on the doorstep. The Devils would have to defend well to keep the Blackhawks from scoring on second opportunities.

At 9:45 of the second period, the Blackhawks evened up the score. Blackhawks’ center Dylan Strome took a low shot on net, and Alex DeBrincat smashed in the rebound for his 7th goal of the season. Both teams went into the locker room tied at one after two periods.

In the third period, the Blackhawks and Devils took one penalty each. At 6:16, the Blackhawks sent the Devils to their fourth power play of the game. Despite skating well and establishing offensive zone time, the Devils could not find a way to beat Corey Crawford. With 7:49 to go, the shots were dead even at 22.

In overtime, the Devils started Taylor Hall on the left wing, Pavel Zacha at center and Damon Severson on defense. The Devils held possession, but the Blackhawks matched their speed. The next shift featured a matchup between the best offensive talents on either team, Patrick Kane and Jack Hughes.

The Devils had their chance when Hughes carried the puck down the middle of the ice and backed off the Blackhawk defense. Hughes shot the puck through a screen that Crawford saved and held on to. The Hawks had their best chance when DeBrincat took a wrist shot from the right wing that was denied by Blackwood. This game would need a shootout to determine the winner.

Jonathan Toews scored the opening goal of the shootout for Chicago, while Nikita Gusev responded for New Jersey. Then Patrick Kane scored and Jesper Boqvist each scored to knot the shootout at two apiece. Kyle Palmieri and Taylor Hall missed their chances and the Hawks missed theirs.

The shootout went to a fifth round, where it was a battle of the 2019 NHL Draft picks. Chicago sent out their number three overall pick Kirby Dach, who scored a nifty backhand deke. The game all came down to Jack Hughes for New Jersey. The 2019 number one pick made a beautiful deke, got Crawford down on the ice, but was unable to lift the puck over Crawford’s pad.

Despite a great effort from their goaltender and a goal from Taylor Hall, the Devils were outlasted by an experienced Chicago Blackhawks team in the shootout.

Taylor Hall was named the second star of the game. Hall led the Devils with 22:08 of time-on-ice tonight and scored the Devils’ only goal of the game on the power play. Blackwood was the third star, thanks to a solid 28 save performance.

Interim head coach Alain Nasreddine reflected on the job that the power play did tonight.

“I thought they did a pretty good job. I was hoping they’d shoot a little bit more, which they did on the third opportunity and we ended up scoring. ‘Goose’ [Gusev] is a really good power play player and I thought it was good for Hallsy [Taylor Hall], he had a good screen by Pav [Pavel Zacha] and took a great shot.”

Even though they did not get the win, the Devils battled harder in their defensive zone and were able to earn their first point in their last three games.

“Losing a guy like ‘Vats’ [Vatanen] an important player for us, I thought our defense did a good job battling to a man in the defensive zone. So, I think in general, everyone had a pretty good effort.”

It’s a quick turnaround for New Jersey, who will travel to Nashville to play the Predators on Saturday at 8:00 PM.