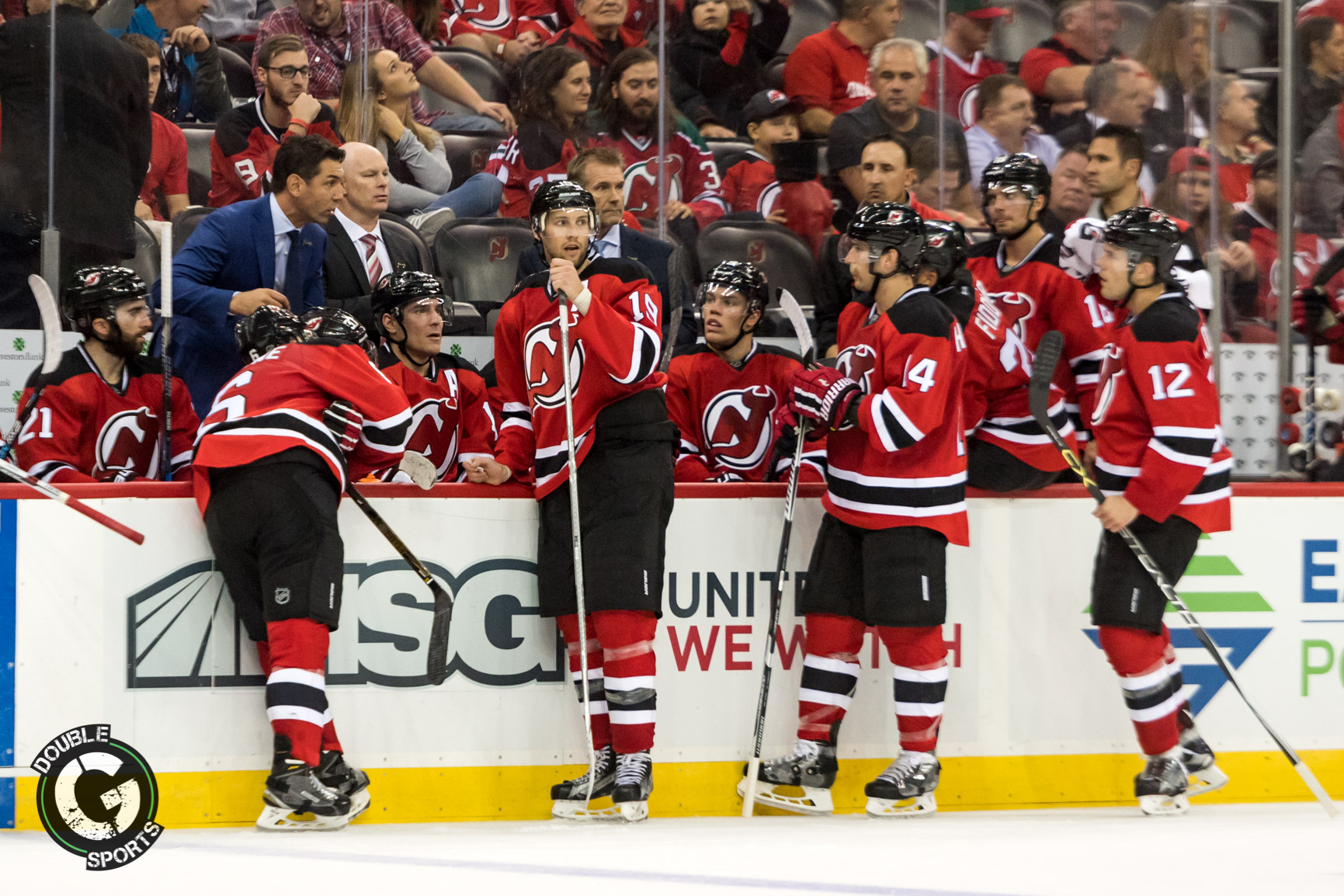 Blue Jackets give Devils a shutout loss for Christmas

Disheartening, discouraging, and disappointing. These three simple words describe the lackluster performance put on by the New Jersey Devils in their final home game before Christmas. What was supposed to be an exciting Metropolitan Division matchup quickly became a day the Devils and their fanbase would like to forget, falling to the Columbus Blue Jackets 3-0.

Donning their festive red, white, and green retro jerseys, the Devils were poised to carry the momentum obtained from their decisive 5-2 victory over the Ottawa Senators this past Thursday night. Unfortunately, the jerseys were the only bright spot of the afternoon, as New Jersey was not able to generate any real offensive threat to Blue Jackets netminder Sergei Bobrovsky.

Keith Kinkaid was surprisingly named the starter for Sunday’s matinee. He was coming off of a strong start against Ottawa, but other than that has been struggling, especially versus Columbus. In three career starts against Columbus, Kinkaid is 0-3-0, posting a .880 save percentage and 3.73 goals against average. The Devils would look to their starter for a strong outing; unfortunately, they received the opposite.

In the opening minutes of the first period, it seemed like the Devils came ready to play. They were controlling the pace of the game and gained the offensive zone with ease. Devils forwards were putting pucks on net, testing the former-Vezina trophy winner. None of the shots were in high-danger areas, but it looked as if the tempo was set for the afternoon.

Things quickly took a turn for the worse for the Devils, however, when Blue Jackets forward Cam Atkinson received a cross-ice pass from Artemi Panarin and slid the puck past goaltender Keith Kinkaid to give his team a 1-0 lead. The goal came just over four minutes into the game and on the first Columbus shot of the game.

Just over a minute later, Oliver Bjorkstrand put the Blue Jackets up 2-0 on a shot that was eerily similar to the first one. Alexander Wennberg threw a cross-ice pass through two Devils players and onto Bjorkstrand’s stick who snapped it over the shoulder of Kinkaid for his fourth tally of the season. The energy inside of the Prudential Center seemed low to begin, but allowing two goals on two shots completely drained the arena.

Although his team was down two after the first period, Head Coach John Hynes did not believe they had a poor start. “I didn’t see us come out flat,” he said. “I thought we carried the play and got off to a good start.”

The start of the second period had a slow and sloppy feel to it. Neither team was generating much offense and the puck was repeatedly bouncing around through the neutral zone. Midway through the second frame, the man they call “The Bread Man” put his team up by three.

Panarin blew through center ice and into the Devils’ zone on a partial breakaway. Defenseman Will Butcher chased him down, angled him off, and kept him towards the outside on his backhand. Panarin threw the puck on net from his backhand and beat Kinkaid low, glove side for his 11th tally of the season. New Jersey found themselves down three with half of the game remaining.

Kinkaid’s night, however, ended there. The Devils goaltender finished the night with eight saves on 11 shots. Kinkaid has now posted a sub .900 save percentage in eight of his last 12 starts. For the second time in Kinkaid’s previous three starts, he was replaced by rookie Mackenzie Blackwood.

New Jersey had a chance to get back in the game late in the second period. Seth Jones took a penalty for high-sticking, and 19 seconds later Columbus received a bench-minor for too many men on the ice. The Devils had 1:41 of 5-on-3 powerplay time. Although the entirety of that powerplay was spent in the Columbus end, the Devils could not capitalize.

Devils forward Kyle Palmieri acknowledged that the 5-on-3 generated a lot of chances. “We put a lot of pucks at the net and there were some second opportunities there,” he said. “We had a lot of opportunities to find our way back into it and put some pressure on them, but it just didn’t happen for us tonight.”

The failed two-man advantage served as a momentum swing for both teams. With nearly two minutes of 5-on-3 time, the Devils and the fans in attendance had a sense of optimism. One goal would have put them right back in the game with a new sense of energy. Unfortunately, Devils forwards did everything but score.

When asked if those 101 seconds were a game changer, Devils captain Andy Greene answered affirmatively. “For sure, obviously you want to get one there,” he said. “I thought the powerplay was really good there, it’s just a matter of finding a way to get one there.”

Hynes echoed the sentiments of Greene when talking about the powerplay. “We delivered the puck to the net and had multiple opportunities to be able to score,” he said. “We had some opportunities to puck the puck in and we didn’t and that is basically what happened.”

When the second period came to an end, there was a sense of frustration from both the players and the fans. Boos were raining down on the Devils as they skated off for the second intermission.

The final 20 minutes did not show much energy from either side. The Blue Jackets were sitting back and defending the lead while the Devils were trying to put as much rubber on net as possible. When it was all said and done, the Devils nearly doubled the Blue Jackets in shots. Bobrovsky was named the game’s first star with a 39-save shutout.

After replacing Kinkaid midway through the second, Blackwood shut the door on Columbus. He stopped all nine shots he faced while gaining the confidence of his head coach.

“He played well the first game and he came in and played pretty well,” Hynes said. “He’s going to get some serious looks here after break.”

Following the game, one of the main things that was being discussed in the locker room was consistency. Since the Devils went 4-0-1 to start the season, they have not been able to put together and string on wins. This is something the team wants to fix coming out of the holiday break.

“We don’t get any traction this year,” Taylor Hall said. “We get a solid win and our momentum gets halted.”

The Devils could not ask for a better time for the holiday break. They are able to take a step back and take a mental break from hockey. New Jersey will visit the Boston Bruins on Thursday. ­­­­­­

The 5-2 Win Over Ottawa At The Rock Last Night Is Just What The Devils – And Their Fans – Needed
Fish Sticks; Four Islander prospects competing in World Juniors
Posting....