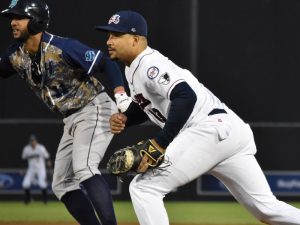 The Bluefish broke a 3-3 tie in the top of the tenth inning on a two-run double by D’Arby Myers for the final score.

Trailing 3-2 in the bottom of the eighth inning, Greg Golson tied up the ballgame with a solo home run (2) to left field.

The Patriots threatened with the bases loaded in the bottom of the ninth, but failed to plate the winning run.

“We had opportunities to win. Our pitchers, like always, kept us in it. When it came down to it with runners in scoring position, we didn’t come down and get it,” said outfielder Aharon Eggleston.

The Bluefish jumped out to a 2-0 lead in the first inning on a Jose Cuevas’ two-run double.

Bridgeport added a run on a sacrifice fly by Jose Gil in the top of the third inning for a 3-0 advantage.

The Patriots made it a one run game with two runs in the bottom of the fourth inning on an RBI single by Eggleston and a sacrifice fly by Mark Minicozzi.

Danny Burawa (2-1) picked up the win with a scoreless inning pitched. Kyler Newby (1-2) suffered the loss, allowing two earned runs on three hits in an inning of work. David Carpenter earned the save (17) with a scoreless tenth inning.

The 2017 Somerset Patriots Season presented by Ford will continue at home with an 11:05 am game on Wednesday afternoon against the Bridgeport Bluefish. The game includes a Businessperson Special and Senior Wednesday. For tickets, visit www.somersetpatriots.com.