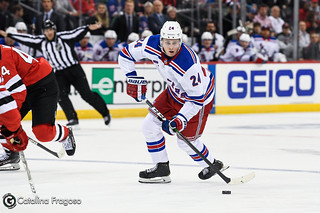 In a game against the Boston Bruins on October 27, the Rangers’ Mika Zibanejad suffered an upper-body injury and exited the contest. Zibanejad had been the team’s leading scorer through its first nine games with 11 points. He has missed the past nine games and during that stretch, the Rangers have a 5-4-1 record.

The Rangers expect their alternate captain to return to the lineup for Friday’s game with the Senators.

While certain players are still trying to find their way in the best league in the world, there have been some Rangers who have played some of their best hockey. Here is a guide of which players have stepped up during the last nine games.

C- Ryan Strome
Coming into this year, not much was said about Ryan Strome and the impact he could have on this Blueshirts team across the National Hockey League’s (NHL) newswire. However, the 26-year-old from Mississauga, Ontario has been a point-per-game player with 18 points in 18 games, which is as many as reigning MVP Nikita Kucherov has this year in 18 games.
After many, including myself, thought Strome would be overtaken by a younger player for a top-six-role, he has been the New York’s second-best scorer. The Rangers have shocked many people with how they have competed against some stern competition in the NHL Eastern Conference. The team sports an 8-8-2 record and Strome’s consistency is a big reason why.

D- Adam Fox
Fox has been one of the Rangers’ most mature players at the tender age of 21. One of the highlights of the Rangers season is their overtime win over the Pittsburgh Penguins on Nov. 12 at Madison Square Garden where Fox showed remarkable patience and sent a perfect pass to Kaapo Kakko who scored to win the game. Fox’s eight points are second among Ranger defensemen, but more so than the points, Fox has shown he can be relied upon to play a heady defensive game and skate with anyone in the NHL.

RW- Kaapo Kakko
The number two overall pick in the 2019 NHL draft has five points in his last five games and has scored five goals since Mika Zibanejad went down with an injury. Kakko has started scoring recently after registering only three points over his first ten games. He possesses good speed, size and an even better set of hands, which is evident by the way he protects the puck in the offensive zone. Look for Kakko to continue to make a case for first-line minutes.

C- Filip Chytil
The 20-year-old was called up from Hartford on Oct. 27 along with teammate Ryan Lindgren. Since then, the Rangers are 5-4-1 and Chytil has scored six goals in that span, stimulating the Rangers offense with his highly skilled puck handling and skating. The young sniper should remain a top-six forward when Zibanejad returns to the lineup.

Honorable mentions:
Brendan Lemieux has become the team’s sparkplug. The physical left-winger has contributed offensively with six points, even while he goes to the corners to hit and fight for loose pucks. Lemieux is a bonafide agitator, but he also possesses the skill to keep up with some of the Rangers’ highly skilled offensive players.

Ryan Lindgren has been a solid addition to the Blueshirts’ Blueline. Lindgren was called up with Filip Chytil and has succeeded in a pairing with a former teammate in the United States National Team Development Program (USNTDP), Adam Fox.

Since Zibanejad’s injury, head coach David Quinn has re-called three players from New York’s American Hockey League (AHL) affiliate, the Hartford Wolfpack, Filip Chytil, Ryan Lindgren, and Tim Gettinger. The team has played its most consistent stretch of ice hockey since Chytil and Lindgren joined the team and Chytil, especially, has been a great addition.

When players get called up others are sent down. On Monday, the Rangers called up Tim Gettinger and assigned Lias Andersson to Hartford. The 21-year-old was not earning much ice-time, so coach Quinn thought it would benefit the former first-round pick to develop his game in Hartford.

While the kids have been doing well, credit must be given to some of the Rangers veteran leadership especially Strome, Henrik Lundqvist, Artemi Panarin, Chris Kreider, and the newly acquired Jacob Trouba. All of them have raised their level of play to help the team while Zibanejad has been out. Panarin has shown he is an all-world player who will score more than a point-per-game. The Blueshirts offense is ninth in the NHL with 3.33 goals-per-game. That should continue to be the team’s strong suit once Zibanejad comes back and injects his own point-per-game talent into the Blueshirts’ lineup.

The Rangers also placed forward Michael Haley on waivers. Haley had been very active to start the season and played his role nicely but was still cut.

Tonight, the Rangers will host the Washington Capitals. The goaltenders for both teams will be in the spotlight as the Caps currently lead the NHL with 3.74 goals-per-game.

Islanders Puck Talk – Should anyone be surprised by this hot start?
‘No one thought we could do it’; Isles come back against Pens to keep streak alive
Posting....