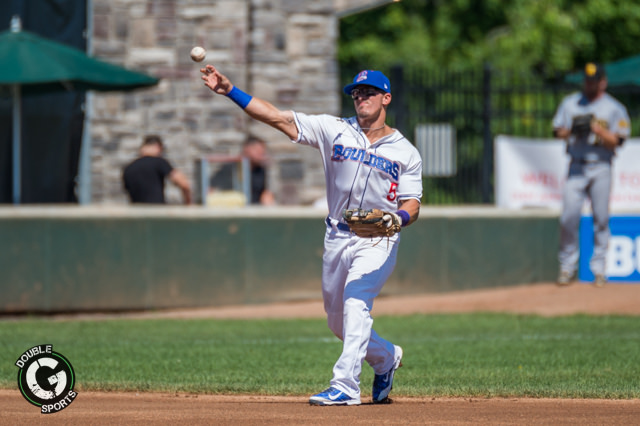 When the Rockland Boulders announced on Tuesday that the Miami Marlins had purchased the contract of shortstop Junior Arrojo, it marked the 14th Boulders player to sign with a major league organization. I spoke to Boulders Manager Jamie Keefe on Tuesday evening about Arrojo joining the Marlins.

“I couldn’t be more excited than I am right now and for a kid that has never been drafted and given a chance and done what he has done in independent ball for the past six years,” Keefe said. “To put up numbers and play the defense he does and become a leader after two years in independent ball that’s a big deal. He is a leader and winner and shown guys the way the game should be played and work as hard as you can every day.”

“Does this guy have the ability to play in the big leagues? I could say that after the first day I watched him play and for a season when he was hurt,” continued Keefe. “They don’t make players like him and biggest thing that sets him apart from other players, time to time and year to year he is a winner and wherever he goes he leads. People don’t realize Junior is not a big voice and doesn’t say too much but goes out and puts his arm or knee in front of the ball.”

“When you look at his OBP (On Base Percentage), he walks a lot, hits and gets hit 40 times a year. It’s the intangibles and sacrificing himself for the Rockland Boulders playing injured every day. If he didn’t have an injury he got one every 1 ½ games getting hit by a pitch.”

“The small things that can take him over the top in the organization and the guy just gets on base. You look at hits, his RBI, and runs scored at the end of the year and match them up with the games played every year, it’s incredible the numbers he is able to put up.”

“The Rockland Boulders are lucky to have had Junior Arrojo for three years, and now that we had him, couldn’t be more proud to see him move forward and get that chance and be the next Boulder to make into the big leagues. That’s showing what you do in the off-season and learning from each game and every season on what you have to work on the next year.”

“A special kid and it’s one thing when guys get signed, get an opportunity and some have been there chance to go back but to have a guy who has never really had a shot, is thinking about his future, what’s next and to keep playing and showing what you have to do says you never know when it could happen, who is watching and call you which basically happened.”

“I’m really pumped on Junior signing with the Marlins and getting a chance to play for an organization in his hometown which only adds to his amazing story,” said Marcus Nidffer, catcher, team captain and teammate “For me, Junior goes down as not only the best shortstop I played with but the best I have watched.”

“There are so many aspects to his game that are un-teachable and listing them would not do justice,” Nidffer continued. “He’s just a fun person to watch play the game and we’ve stayed close friends throughout our playing career and I cherished every moment on the teams’ we’ve played together on. I’ll miss playing with June but excited for his next opportunity. I believe he will surprise and open a lot of eyes in the Marlins organization. A class act, he’ll ball out and they’ll love his personality. They not only gained a great shortstop but a great person and I wish him nothing but the best.”

“Junior Arrojo, a durable fixture and key contributor to the Boulders lineup,” said Seth Cantor, Boulders Assistant General Manager “The opportunity is well-deserved and continues a tradition of quality players who are getting extraordinary opportunities. We wish him the best.”

With about a month remaining until the season opener against the Sussex County Miners, Keefe has to scramble and find a new shortstop. That will be a daunting task. However, Keefe explained he is up to the challenge.

“It makes my life more miserable, but it is what it is,” explained Keefe. “I’m in this spot for a reason and get paid to win games but more importantly to get guys an opportunity at the next level. The last couple of years, he (Junior Arrojo) has been the heart and soul of the team.”

“Now we’re in a situation when things are going to change,” said Keefe.  “After 2014, we lost Edmondson, in 2015 Cardullo and Maloney and in 2016 Junior. The turnovers are okay and we hate to see them go but they’re going to good places and anything but happy for them and why we do the job. Give an opportunity otherwise they would not get. People have to realize, Junior is gone and to have him for three years was fantastic and couldn’t have a better person to talk to every day”