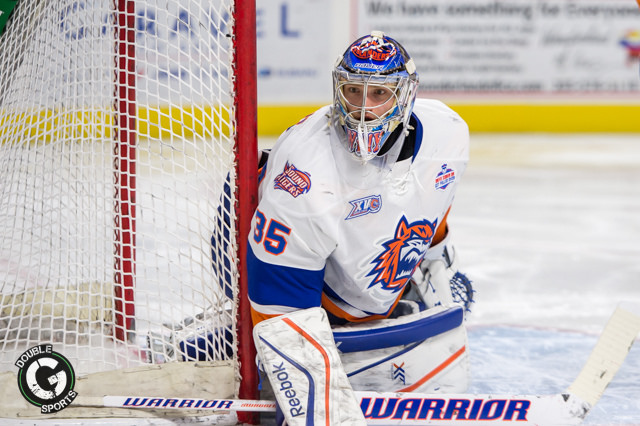 The NHL Stanley Cup Playoffs are underway, but the American Hockey League regular season concludes this weekend. While the New York Islanders find themselves preparing for next season already, the Isles’ AHL-affiliate, the Bridgeport Sound Tigers, find themselves on the cusp of a playoff berth with two remaining games. But similar to the NHL counterpart, the Sound Tigers’ fate is not solely in its own hands. Bridgeport is one point behind the fourth-place Hershey Bears. The Sound Tigers face the Springfield Thunderbirds Friday evening and the Wilkes-Barre/Scranton Penguins on Saturday. Both games are on the road.

The Sound Tigers have had the Thunderbirds’ number all season, going 7-3-0-1 in this season’s series. Friday will be the 12th and final meeting between the two for the season. Overall, Bracken Kearns leads Bridgeport against Springfield with 11 points (seven goals, four assists) in 11 games. The Sound Tigers are 4-0-0-1 at the Thunderbirds’ MassMutual Center this season.

As if any tilt was ever easy, Saturday’s matchup could potentially make or break the Sound Tigers’ playoff hopes. Saturday’s game will mark the sixth and final meeting between the Sound Tigers and Penguins this season, and the third matchup at Mohegan Sun Arena. Wilkes-Barre/Scranton has earned points in each of the five previous contests (4-0-1-0) and is 1-0-1-0 against Bridgeport at home. However, the teams haven’t met since Dec. 11 when the Penguins scored four unanswered goals for a 4-1 victory at Webster Bank Arena. Kane Lafranchise recorded the Sound Tigers’ only goal that evening, assisted by Jesse Graham and Kyle Schempp.

The Sound Tigers welcomed back three crucial skaters on Monday when the New York Islanders reassigned Josh Ho-Sang, Connor Jones and Adam Pelech to Bridgeport. Ho-Sang, who has 36 points (10 goals, 26 assists) in 48 AHL games, made his NHL debut on Mar. 2 at Dallas and went on to record 10 points (four goals, six assists) in 21 games with the Isles. Jones also made his NHL debut this season, Apr. 2 at Buffalo, and registered a plus-1 rating in four games. Defensively, Adam Pelech skated in 44 games with the Islanders and posted 10 points (three goals, seven assists). All three are expected to be in the lineup this weekend. Given some recent NHL experience, a total of 69 games between the three, having Ho-Sang, Jones, and Pelech in the lineup would prove very beneficial to the Sound Tigers looking to surpass the Bears.

The AHL announced last week that Devon Toews has been named to the 2016-17 AHL All-Rookie Team, as voted by coaches, players and media in each of the league’s 30 markets. The Quinnipiac University product has skated in all 74 games for the Sound Tigers this season and leads all rookies with 38 assists, while tying for the league lead among rookie defensemen with 42 points. Toews represented Bridgeport at the 2017 AHL All-Star Classic in January. At the All-Star Game, hosted by the Lehigh Valley Phantoms, Toews won the fastest skater competition. His impressive 13.478 earned him the second fastest time in AHL history.

Overall, the Sound Tigers’ magic number to clinch a playoff spot is “six,” but the club does not control its own destiny, as Hershey’s magic number is “four.” Bracken Kearns leads Bridgeport in goals (23) and points (50), is tied for the team lead in power play goals (9), and ranks second in plus-minus (+18). Kane Lafranchise leads Bridgeport with a plus-19 rating. Ryan Pulock is eighth among AHL defensemen with 44 points (14 points, 30 assists). Let’s see if the Sound Tigers destiny is different from the Islanders’ this season…