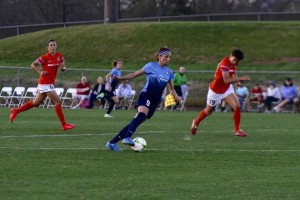 In front of a sellout crowd at Yurcak Field at Rutgers University, the home-standing Sky Blue F.C. got past Alex Morgan and the Portland Thorns, 1-0 on Saturday night.

Sky Blue created most of the chances in the first half and thought were finally rewarded when in the 18th minute, Nadia Nadim thought she had scored when she beat Angerer 1-v-1, but she was ruled offside.

Just moments later, US International Kelly O’Hara showed her class when in tight spaces, she laid one off to Nadim who again beat Angerer this time to put Sky Blue FC up 1-0.

Portland Thorns’ manager Paul Riley said postgame that it was a “tale of two halves” as his Thorns had the much better of the play in the second half.

This was due in large part to pressing forward and substitute Alex Morgan of the USWNT, who came on just short of the hour mark.  Her pace on the flank was difficult to deal with and the Thorns created chances.

Canadian international Christine Sinclair nearly scored in the 16th minute, she had her point blank shot stopped by Cameron, and her rebound hit the post.

The game seemed to turn in Portland’s favor when Brittany Cameron was whistled for a bad foul in the box on Christine Sinclair.  To worsen matters, Cameron was yellow-carded for dissent which Cameron confirmed after the game saying, “I told [the ref] what I thought”.

Her teammates helped to calm her down by her goal as Alex Morgan stepped up to take the penalty in the 89th minute.

“It was my mistake, so now we have to fix it”, Cameron stated post game.

And fix it she did.

Cameron came up with a highlight reel double save on Alex Morgan when the keeper stopped Morgan’s initial attempt.  The rebound was quickly pounced upon by the US international and she hit it well left-footed, but Cameron got her left hand to the ball to keep it out of the net.

The home side saw out the 4 minutes of added time, and Sky Blue had all three points and at that moment, still had hope for the playoffs.

Thorns’ manager Paul Riley stated that Morgan apologized to her teammates, which Riley stated “Was crazy” and that he, “Still had complete confidence in Alex [Morgan]”.  He went on to add, “Sometimes your name just isn’t on the result, and tonight it wasn’t for us”.

He called the game, “A tale of two-halves” and he credited the young Sky Blue midfield for great work on a “experienced” Thorns’ midfield and called Sky Blue “A team you wouldn’t want to play” in the playoffs.

After the match, the record crowd didn’t want to leave lining the sideline looking for autographs from their heroes.

It was quite a scene in New Jersey and incredible to see the support for women’s soccer in the United States.

Jim Gabarra, the manager of Sky Blue FC, repeated his plea post-game, “If every person in New Jersey could make it to 1 game, we could have this atmosphere every night”.