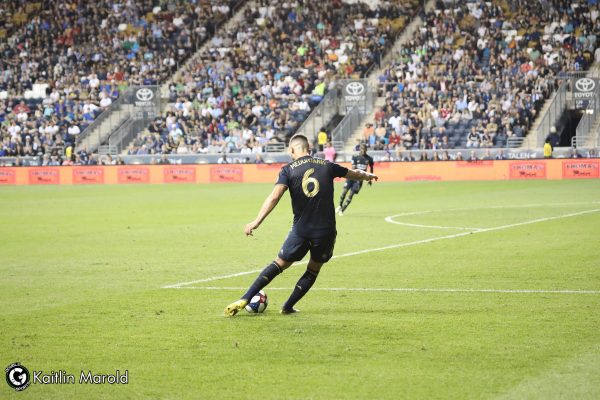 Could Tonight’s Philadelphia Union Game vs Chicago Be Played?

Chester, PA: As most of the East Coast has been experiencing record heat this week, it could have an impact on all sports. There are questions about tonight’s Philadelphia Union game against Chicago Fire at Talen Energy Stadium. The game is scheduled to start at 7:30 PM, but the temperature during the day will be at 100 degrees.

The Speculation was first reported about the game below:

According to league guidelines, there's a chance the #PHIvCHI match Saturday could be postponed. Next free weekend for both clubs is Sep 7th. TBD#DOOP,#MLS,#Union,#Fire,#cf97,@PhilaUnionUK,@MLSFemale,@SoBEspanol,@SonsofBen,@Tim_Lovenguthhttps://t.co/OrbKPMV1k3

On the MLS website, they explain how they determine how they measure the temperature on the field.

How is the temperature measured?

“It’s measured by Wet Bulb Globe Temperature (WBGT), and not ‘regular’ temperature or heat index,” Major League Soccer states. “The WBGT is a more involved measurement, which takes into account how stressful the heat would actually be for a player. It includes temperature, humidity, wind speed, sun angle, and cloud cover (solar radiation).”

Could the match be delayed or postponed???? Here’s what MLS says on their official website:

“The WGBT is usually measured twice during the match; in extreme heat, the referee will add a third measurement. The first measurement will occur approximately 60 minutes prior to the start of the match.

You can also expect to get some stoppages for water breaks, as well.

The threshold for mandatory hydration breaks occurs at 82 F on the WBGT and will take place at approximately the 30th and 75th minute of the match. The referee can also call extra breaks whenever he deems appropriate.

The Union announced that fans attending the game can bring up to one liter of water in either a sealed bottle or container in order to battle the excessive heat.

Water bottles? No dogs? Get the important deets for tomorrow's match in this week's #DOOP Download presented by @VSPC! pic.twitter.com/Jg8CwcZRCy

According to Weather Channel, the Weather down in Chester  for the next couple of hours and during the match which is set for 7:30 PM

Stay tuned for more updates as they come along.