Debbie Keitel – An Empowering Voice & Talent of Her Wrestling Generation

Debbie Keitel is definitively an Irish professional wrestler, but in the past year, it’s her voice that’s come to the forefront. During the Speaking Out movement of 2020, Debbie Keitel bravely came forward to share her story, which included identifying sexual abusers within the wrestling industry. In an exclusive interview with In The Zone’s Candace Cordelia, Keitel takes a step back to ruminate on the aftermath of Speaking Out and her part in the unprecedented undertaking.

“I think, for me personally at the time, it was extremely scary. I had kept it a secret for so long and I knew that…there were friends of this person that I didn’t want to hurt because nobody wants to wake up and find out that their friend is a bully or anything like that. In that sense, it was extremely daunting. I don’t regret it. Absolutely not, because I think that the wrestling business needs to be exposed in many ways. But I think there’s professional ways to go about it as well.”

“I think what’s been done in the UK at the moment when you have the likes of Rhia O’Reilly, who’s now safeguarding and making sure that the code of conduct for the EVE Pro Wrestling school is in place. In Ireland, the wrestling industry isn’t defined because it’s not seen as entertainment and it’s not seen as a sport. It’s fallen in between the cracks, unfortunately. So, at the moment we’re trying to see what we can do in terms of creating a safer place for a wrestling school. And Katey Harvey and Phil Boyd – the [head] trainers at the Fight Factory [Pro Wrestling in Dublin, Ireland] — have really put in so much work.”

In part with helping Harvey and Boyd, Keitel has been given the title and role of Talent/Fan Liaison for the prestigious wrestling promotion. Her core obligation involves “being the middleman for the fans and wrestlers” if someone had a question or wanted to make a complaint without feeling uncomfortable or hesitant.

She explains, “I found that I was very good at looking after the fans when they came into the building. I have a really good repertoire with my fellow trainees and colleagues…a lot of people kind of fear the idea of talking to someone of authority. So, I would then be the person they come to and I could it for them, or I could do it with them depending on how comfortable they were with the situation.”

All of Keitel’s activism behind the wrestling scenes complements her can’t-miss fighting spirit in the ring, whether as solo act or as one-half of tag team The Woke Queens. Keitel’s skillset and head-turning, Valley of the Dolls-meets-Deathproof inspired fashion sense caught the attention of WWE. She scored a tryout with WWE’s NXT UK brand in 2019, which led to her NXT UK TV debut that same year facing against none other than WWE superstar Rhea Ripley.

Keitel describes her NXT UK tryout as “an incredible experience,” and as for wrestling against Ripley, she adds, “that was just unbelievable.” “To stand in an arena in Wales and make your NXT UK debut in front of thousands of people was just…it was the most amazing experience.”

Keitel also recalls the valuable post-match feedback she received not only from her opponent but also from a WWE legend.

“She was really, really sweet. I remember coming backstage and we were greeted by Shawn Michaels and Shawn turned to me and he was like, ‘You know, your face, you’re worth a million dollars! I don’t know what I’m gonna do with you, but you’re a million dollars! You’re amazing! And Rhea grabbed my hand and she was like, ‘You did really, really well.’ I kind of stepped aside and let them chat and then afterward she was like, ‘That was so much fun.’ We chatted about it and she gave some advice, and even before the match she really helped me prepare.”

Debbie Keitel has made quite a noteworthy impression in the wrestling industry with nearly just four years of pro wrestling experience under her belt. Debbie’s advice for young girls and women looking to make their own impact in the wrestling business is very clear: “don’t ever take no for an answer.”

Keitel further explains, “If someone says, ‘you’re not what I’m looking for,’ [ask] ‘Ok, well what are you looking for? Because I’m willing to improve and learn. You need to tell me what you want so I can work on it.’ I think for so long we were given certain moves, we were told what to wear, we were told what to say. I think when you see things like on AEW [All Elite Wrestling] you have Britt Baker and Thunder Rosa having an incredible main event, lights off, no DQ, hardcore match…when I was a kid that would just be unheard of.”

Check out the rest of Candace Cordelia’s video interview here with Debbie Keitel where you can learn more about her start in the wrestling business, which was encouraged by WWE’s Mick Foley, her thoughts on tag team wrestling, and her Woke Queens tag team partnership WWE NXT UK wrestler Aoife Valkyrie. 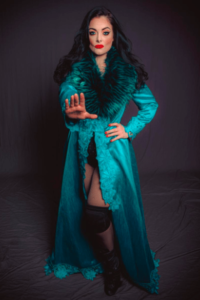