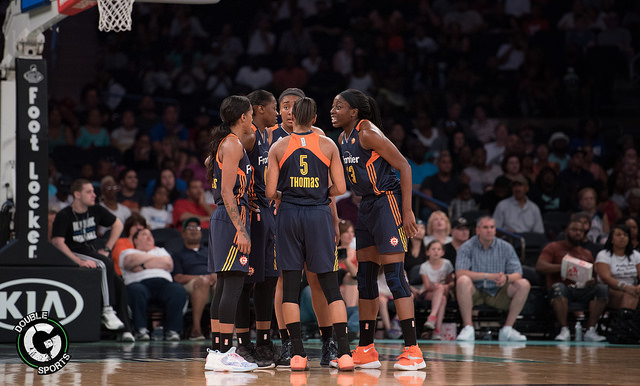 UNCASVILLE, Conn – The 2017 WNBA season is fast approaching and things were looking very bright for the Connecticut Sun, until the injury bug cast a shadow on the teams early season fortunes.

The Sun had one of the league’s stronger finishes in 2016 and under coach Curt Miller, now in his second season, hope to start this year right where they left off last season.

But a season-ending injury to former No.1 pick Chiney Ogwumike (second in three seasons with the Sun) and recent injuries to veteran guard Alex Bentley and last year’s top draft pick Morgan Tuck have given Miller reason to approach the upcoming regular season with plenty of caution.

Bentley ‘tweaked’ her right ankle while home in Indianapolis. Tuck, who was recovering from knee surgery, recently had to undergo a minor procedure to remove some additional debris which has put a damper on her return to action.

In addition, second-year guard Rachel Banham’s status has a question mark attached to it after her promising rookie year performance was cut short by a knee injury. And with Lynetta Kizer, Danielle Adams and Kayla Pedersen currently fulfilling overseas obligations the Sun is short-handed in the first few days of training camp.

However, Miller was cautiously optimistic during the Suns annual Media Day festivities held at the Mohegan Sun Arena.

The Sun has strength and depth at the guard spots in Bentley and Jasmine Thomas along with Banham, Courtney Williams, Kelly Faris and Shekinna Stricklen.

Miller, who now has the dual title of coach and general manager, may have to make a difficult roster decision down and release one of these high-quality guards.

One area of immediate concern for Miller is finding depth in the low post. One player that is expected to make a difference in the paint is 6-foot-6 Jonquel Jones. Jones had a spectacular offseason playing in Korea and the Sun are hopeful that she will become one the more dominant WNBA post players. Another Jones, No. 8 draft choice 6-foot-3 Brionna Jones (Maryland), has made a positive impression in the first few days of training camp.

This year’s feel-good story of training camp belongs to veteran Allison Hightower who is attempting to make a comeback after suffering a slew of knee issues that has kept her on the sidelines since 2014. Everyone in the Sun organization is pulling for Hightower’s successful return to the WNBA.

The bottom line is that Miller has advocated for patience with his youthful squad and is confident that with time the Sun will have one of the better teams in the league.

The Sun will open the preseason with a four team tournament-type format on May 2 and 3. The teams competing include the Sun, New York Liberty, Chicago Sky and the LA Sparks.

Save the date: Breanna Stewart will make her 2017 appearance at Mohegan Sun Arena on June 29.

The very best of success to one the world’s top players, Elena Delle Donne; Delle Donne was traded in the offseason to the Washington Mystics.