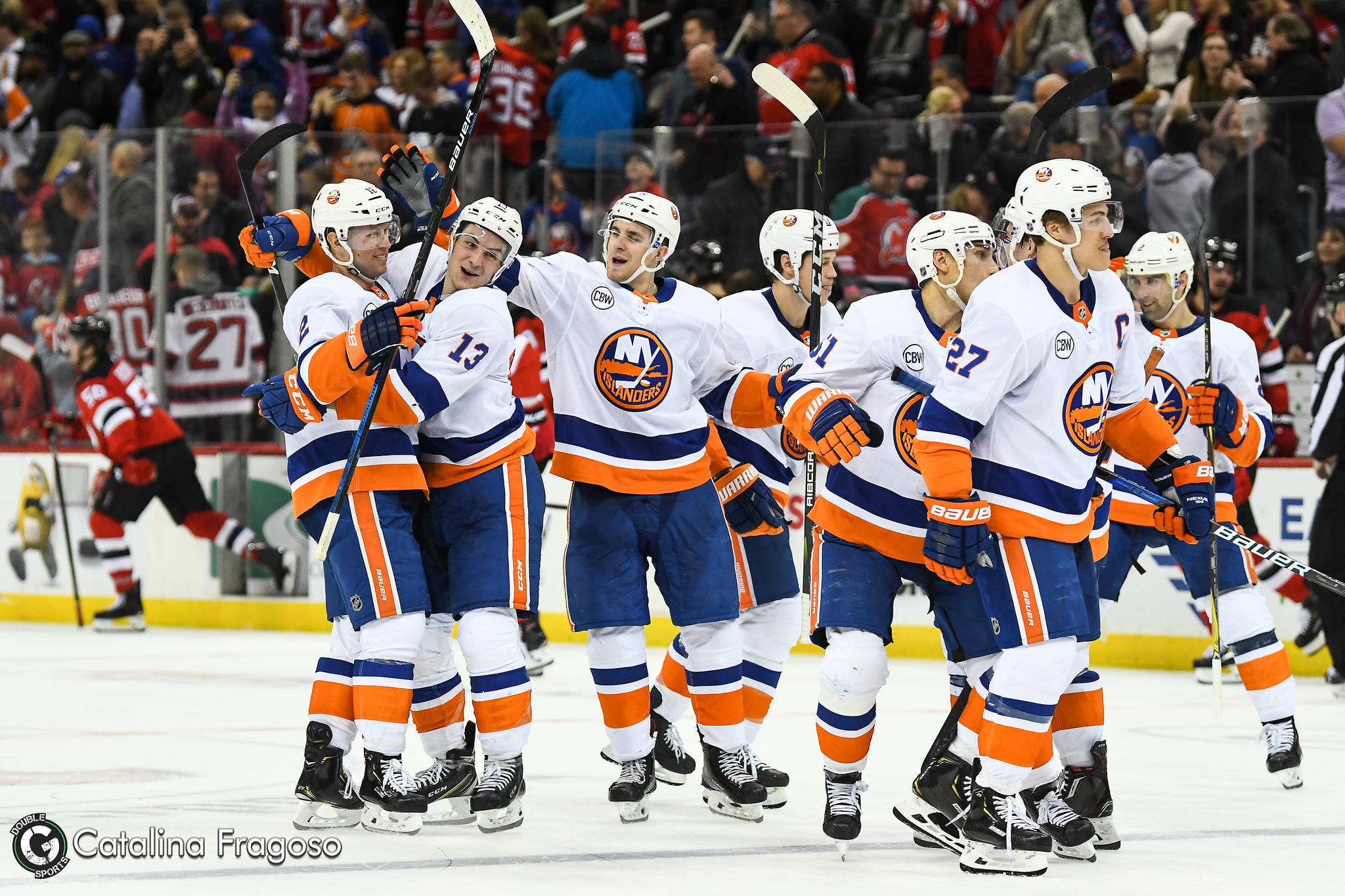 Thursday night at the Prudential Center marked not just the fourth and final meeting in the regular season between the New Jersey Devils (20-25-8) and New York Islanders (31-16-6), but the long-awaited return of Devils goaltender Cory Schneider. Back on December 14, Schneider had a nightmarish start against the Vegas Golden Knights, yielding three goals in the first period before being replaced by Keith Kinkaid.

Already winless in nine games this season and holding a high goals-against average of 4.66, Schneider sustained an abdominal strain which forced him to miss 17 games. He was sent to Binghamton of the American Hockey League for conditioning where he played five games.

Head Coach John Hynes on Schneider’s return, “Really happy for him, he has gone through some adversity and way he has worked through it and commitment to try to get back his game mentally and physically read to play. A long road and certainly has put the work in. He is well-respected member of our team, a big part of the brotherhood and a leader.” 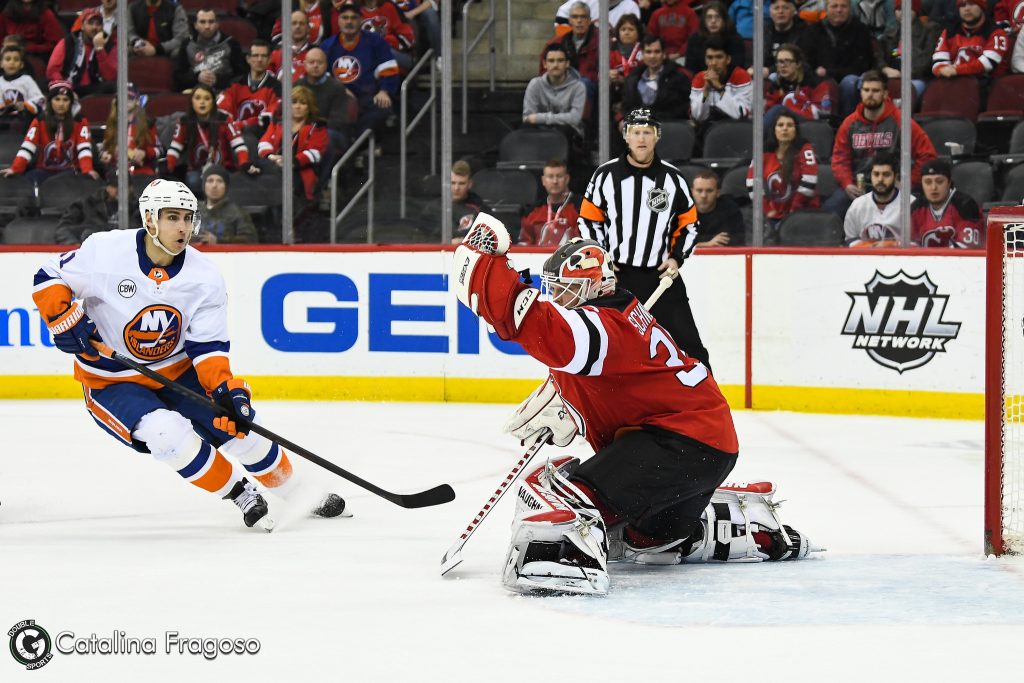 Cory Schneider returned to the net for New Jersey.

The Devils were coming off a 5-1 rout on Tuesday night at home against the Los Angeles Kings coupled with the trade of Brian Boyle to Nashville. Early on in the first period, Schneider was peppered with shots and stood up to the test. Kevin Rooney gave the announced crowd of 13,265 something to smile about 5:32 in, breaking into the zone and snapping a shot glove-side, past Islanders goalie Thomas Greiss.

Hynes on Rooney’s play this season, “We felt going into the year a guy who could elevate into our team and when you see his physicality, plays with speed, got good size and tell is a lot more comfortable and multiple opportunities to be an NHL regular. He is an excellent penalty killer and starting to see an identity with him.”

New Jersey continued to dominate the puck inside the New York zone, winning the territorial battle. By the midway point of the first period, the Devils were out-shooting the Islanders 9-4. However, New York found its rhythm and wound up closing the shots on goal margin to 11-9 when the horn struck.

In the second period, the Islanders managed to tie the game with 6:18 remaining as Ryan Pulock sprung Matthew Barzal with a long outlet pass from the New York zone. Barzal sprinted into the Devils zone and backhanded the puck top shelf past a sprawled out Schneider.

Both teams’ power play penalty killing units were impressive Thursday night, successfully fending off five by the end of the second period.

In the third period there were plenty of quality scoring opportunities but Schneider and Greiss turned away every shot coming in their direction, forcing a 3-on-3 overtime.

In the extra session both goalies remained on top of their game with the Devils getting the best chance as Jesper Bratt blasted a shot that rung off the left goal post.

Unable to settle the game in an extra session, the teams’ moved onto a shootout where Greiss and Schneider did not flinch under pressure, making saves in the first three rounds. In the fourth round, Josh Bailey sealed the New York victory and season sweep of New Jersey by flicking a wrist shot past Schneider. Despite a 19th straight loss, Schneider made 27 saves in goal. 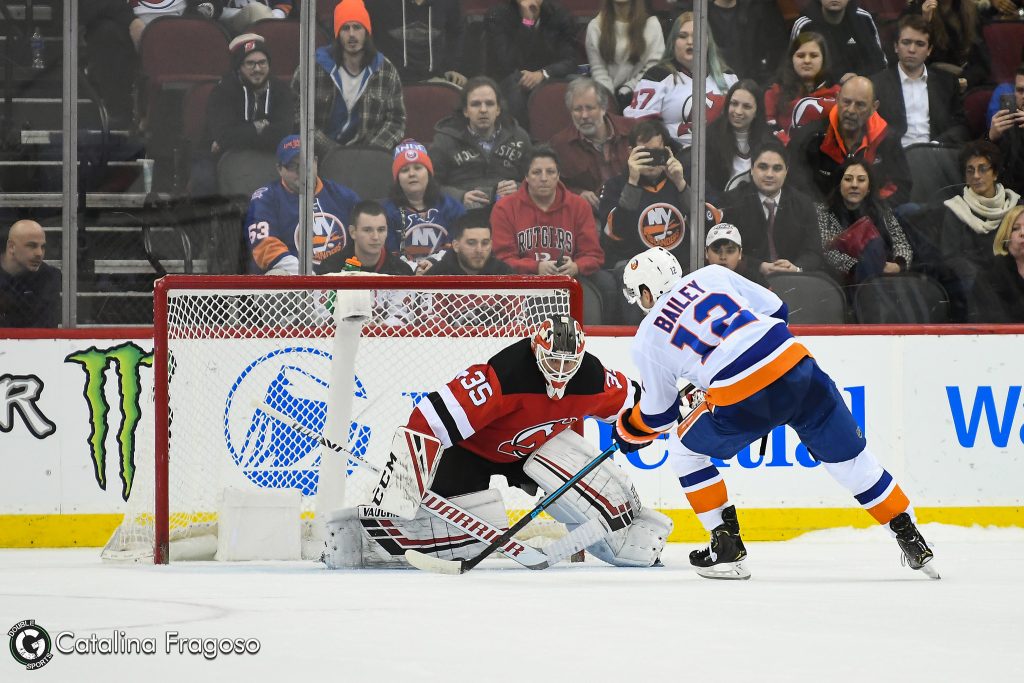 Josh Bailey gets the game winner past Cory Schneider.

Cory Schneider on the game, “I felt pretty good in staying with the guys and even Bailey’s shot I didn’t bite too hard. He had some angle on it and elevated the puck and just beat me and sometimes how it goes. They have five or six guys with a good track record in shootouts.”

“I felt really good all week at practice and looking forward to playing. Felt ready and focused, moving better and athletic. They’re one of the best teams’ in the league when it comes to screens and tipping pucks and our D-men and forwards did a really good job letting me see it and stepping in front and not allowing them to get free and have easy tips and rebounds and executed that game really well.”

“It’s one game and moving forward trying to stay in the moment and has to happen automatically and keep at it. Digging, working hard and hopefully get on a roll and rhythm. I have done it before in my career and kind of re-establish my game. Haven’t played that much and last time didn’t go so well and lots of fans have been very supportive with not a lot of reason to and great hear them get behind me.”

“The top team in the division, don’t give you a lot, we stayed with them and competed and had our chances to win the game. A good bounce back performance by our group and we’re not satisfied and like to get that next point against a good team like that. We’re fighting for points and wins, every game matters.”

Hynes on Schneider’s performance, “He was much more confident in net, in the first period made a couple of saves on point blank shots and not guessing. A strong position goalie, squared up to shots and good on the rebounds. Fighting through traffic to find pucks.”

“Coming into the game we talked about two things, our fight and focus. Winning 1 on 1’s, second efforts, board play and physicality. We played a pretty focused game being in adverse situation and a key member of our team traded away. We didn’t find a way to get two points but that’s one.”