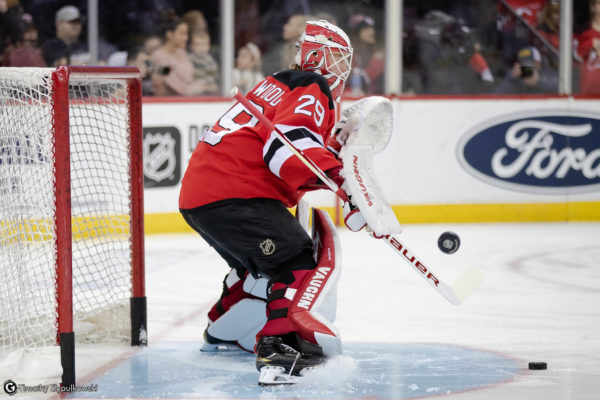 Devils Handle the Sharks on Thursday, but up Next: Ovi and the Capitals on Saturday

The end of February can be an uneasy time of the season. A number of teams are looking to buy or sell big on this year’s trade block. Even if you’re the Boston Bruins and you have only lost 11 games in regulation with 88 points or you’re the defending Stanley Cup champion St. Louis Blues sitting at the top of the Western Conference, moves are being made. The trade deadline is just around the corner (this coming Monday, 2/24, at 3 P.M. EST) and teams that are not exactly where they want to be in the playoff push have to buckle down and make some hard decisions as to what’s next. Sometimes that “what’s next” means moving really important, impactful pieces of your team elsewhere.

The New Jersey Devils faced off against the San Jose Sharks for the first time this season on Thursday night at the Prudential Center. This busy stretch started this past Sunday with their dad’s trip coupled with two major trades, so securing their third consecutive win at home in front of a crowd of 13,941 was definitely a breath of fresh air. Devils’ interim GM Tom Fitzgerald sent captain Andy Greene to the New York Islanders and sent fan-favorite winger Blake Coleman to the Tampa Bay Lightning (read more about the trades in this piece from DGS writer Tim Purcell). Preparing for the potential scenarios that could play out come Monday, the Devils decided to recall Cory Schneider from the Binghamton Devils to back up starting netminder Mackenzie Blackwood. Louis Dominque did not dress, not because of an injury, but to keep him at his peak as an asset on the trade block. We saw this tactic used earlier when the Devils rested Taylor Hall just prior to the trade with Arizona. San Jose also made a pre-deadline move prior to arriving at the Prudential Center when they sent top blue-liner Brenden Dillon to the Washington Capitals.

Similarities between these top players from each roster? All were loved by their organizations. But more importantly, all three have been sent to potential playoff bound teams, so their visions of a chase to the Cup this season have been renewed.

Similarities between these two teams? Yes, many. Both have fired their head coach this year and are now operating with an interim head coach behind the bench; Alan Nasreddine for your Devils and Bob Boughner with the Sharks. Both squads are well outside of the wildcard race, 12 points shy for the SJ and 16 points behind for the Devils. The teams met on their 60th game of the season, with the Devils prevailing, and now both have 56 points. Going into the season both teams had much higher expectations as to what could be accomplished this season. Here we are now, nearing the trade deadline, with both teams hoping to find the missing pieces to make a more solid run in the 2020-21 campaign.

Does the preparation change when the Devil’s face a similar opponent compared to a team that sits higher in the standings?

“It’s been the same story all along, whoever we’re playing it’s the same thing. The X’s and O’s may change for forechecks, backchecks, and systems, but mentality and the way we approach everything stays the same,” mentioned first star of the game, goaltender Mackenzie Blackwood, post-game. Blackwood is coming off his 5th straight win here, while facing the San Jose Sharks for the first time in his career.

When asked what the key was to achieve that feat he couldn’t help but chuckle.

“Today I put new laces in my skates,” said Blackwood.

Blackwood couldn’t help but flash his smile while saying this, and, if you remember earlier this season he lost some of his front teeth. Somehow contact was made under his mask which resulted in him saying goodbye to a few of his pearly whites. We’re all getting used to his new grin!

“Today was another game that wasn’t pretty, there wasn’t a lot of flow to the game. It was really choppy and slow and boring, but we stressed before the third that we want to focus and we’re 20 minutes away from winning a hockey game. I thought our guys did a really good job managing the game, managing the puck, and when we made mistakes and there were bounces Blacky was there to shut the door,” blue-liner PK Subban’s thoughts on Thursday’s win. PK earned second star of the game after burying the game-winner on a power play at 2:56 of the third period. Third star was Jesper Bratt who scored the Devils equalizer at 16:15 of the second period.

Next up the Devils face the Washington Capitals in a Saturday afternoon matinee at home. The Caps sit atop the Metropolitan Division tied with the Penguins at 80 points. But the real question: how do the New Jersey Devils stop Alexander Ovechkin from making National Hockey League history on their home ice? Ovechkin has very quickly been approaching goal number 700 on his career, and currently sits at 699. He leads the Caps in goals this year with 41, and his pace is astonishing. Ovi is looking to become only the 8th player in NHL history to reach this milestone and the Devils are preparing to not have this feat accomplished while facing them as the opponent.

“Obviously they’re a great team. We had a strong game against them in their building and we played them again the next week and they’re a tough opponent,” coach Nasreddine said of the Capitals coming to town. “We know that coming in. Obviously, they’re going to be looking at Ovi to get his 700th. For us we have to defend the same way whether he was at 699 or 750. We have to take him away. We’re going to have to make some adjustments that we always make against Washington, so it’s nothing new, but obviously he’s a dangerous player.”

Catch the Devils and the Capitals at 1PM this Saturday. It should be a really great match-up to take us into the final days on February!