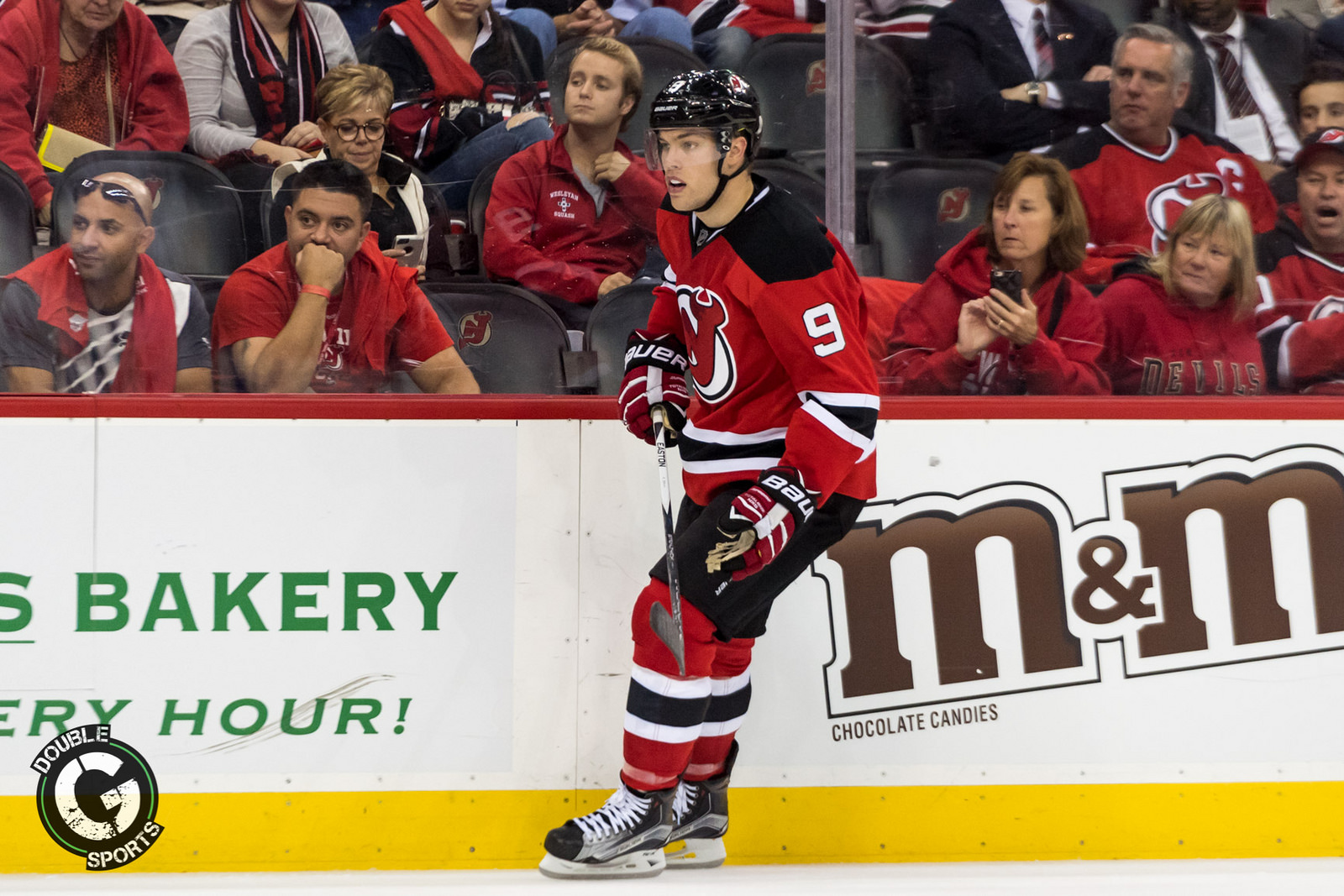 Devils Have Tough Decision to Make With Taylor Hall

As the New Jersey Devils head into arguably one of the biggest off-seasons in franchise history, they have a very tough decision to make on how to handle Taylor Hall’s contract situation.

As the Stanley Cup Final rolls on, the New Jersey Devils are looking forward to the summer of 2019. General manager, Ray Shero and company, are heading into possibly one of the most important off-seasons in franchise history. After making the playoffs in the 2017-2018 season, New Jersey is coming off a disappointing 2018-2019 season. They finished with a record of 31-41-10 for 72 points. That’s the worst in the Metropolitan Division, second worst in the Eastern Conference, and third worst in the entire NHL. Most of all, this puts them in a tough decision with what to do with their star left-winger, Taylor Hall.

Taylor Hall has been New Jersey’s best player since they acquired him from the Edmonton Oilers for Adam Larsson. In 181 games in a Devils uniform, he’s scored 70 goals and dished 113 assists for 183 points. Most of all, he had the best season of his career and one of the best seasons by a player in Devil’s history in the 2017-2018 season, putting up 39 goals, 54 assists for 93 points. He carried New Jersey to their first appearance in the Stanley Cup Playoffs since the 2011-2012 season. He was the recipient of the Hart Trophy for league MVP that season, the first in New Jersey Devils history.

The 2018-2019 season was a rough one for Taylor Hall, as he played in just 33 games. He missed most of the season dealing with a left knee injury, an injury in which he had successful arthroscopic surgery to repair. Now the Devils will have a very tough decision to make heading into the 2019-2020 season. The 27-year-old has one year left on his contract. And according to his agent Darren Ferris, Taylor Hall is in no rush to sign a contact extension with the New Jersey Devils.

From Hall’s side, it makes sense why he wouldn’t feel any pressure to sign an extension with New Jersey. The left-winger has only made the Stanley Cup Playoffs once in his nine-year career, that of course being in 2018 with New Jersey. In that lone playoff appearance, the Devils got bounced by the Tampa Bay Lightning in five games in the first round. He probably wants to sign with a contender while he’s still in his prime. And as of right now, the Devils simply aren’t that.

So now we come to the million dollar question. And that is, what should the New Jersey Devils do about this and how should general manager Ray Shero and company handle the Taylor Hall contract situation? It ultimately comes down to how Shero feels about the current state of his team. Does he believe the Devils can actually become Stanley Cup contenders in the near future? Or does he have his doubts and still views the Devils as a rebuilding team?

Let’s assume that Ray Shero believes the latter, in which case the answer is simple. The Devils trade Taylor Hall during the off-season for the best return they can possibly get. This would be very difficult for Devils fans to stomach, and understandably so. Not only would they be losing a fan favorite in Taylor Hall, but trading him would pretty much be waving the white flag on the next couple of seasons. Devils fans have seen their team miss the playoffs for seven out of the last nine seasons, as well as six of the last seven since making it all the way to the Stanley Cup Finals back in 2012. To go through all of that only to know more losing seasons are coming will be tough to stomach, especially after the future looked so bright after the return to the playoffs 2018.

We’re not here to be a good story, We are here because WE WANT THE CUP! And we will do WHATEVER it takes!

Unfortunately though, these are the types of bitter pills you have to swallow when you’re a rebuilding team. Furthermore, fans should look at the positive end of the spectrum. Trading Taylor Hall could greatly accelerate the Devils rebuild with the potential return a player of his caliber could demand. All you need, for an example, is the return the Ottawa Senators got from the San Jose Sharks in return for Eric Karlsson. As much as saying goodbye to Taylor Hall would sting, it may end up being what’s best for the long term interest of the New Jersey Devils organization.

HOWEVER, it’s time to look at the more complex, risky, and in some ways more optimistic end of the spectrum. Let’s say that Ray Shero believes the former; that the Devils aren’t that far away from becoming legitimate contenders for the Stanley Cup. Believe it or not, it’s not that far-fetched when you really take a deep look into it. Last season, the Devils roster was plagued by injuries, including the injury to Hall. Also, they struggled to find consistent goaltending until the emergence of Mackenzie Blackwood. If the Devils can get healthy and find more consistent play on defense and in the net, it’s not out of the realm of possibility for them to improve greatly from last season.

Most of all, the Devil’s rebuild gained a huge boost on the night of April 9, 2019, better known the 2019 NHL draft lottery. New Jersey had a 11.5 percent chance of getting the first pick in the draft. Those were the third best odds of the 15 teams participating. Sure enough, the hockey gods ended up smiling down upon Ray Shero, and the Devils ended up winning the lottery, meaning New Jersey will select first overall in the upcoming 2019 NHL Draft on June 21 and 22.

The @NJDevils will be heading to the #NHLDraft with the No. 1 pick! #NHLDraftLottery pic.twitter.com/o5IIGMR6qZ

Furthermore, the Devils will have ten total selections in the draft, including three second round picks and two third round picks. Having so many picks in what is considered to be one of the better draft classes of the past several years is a very good thing for New Jersey.

Last but not least, we have to consider how much the Devils are set up to have a monster off-season during the summer. With this draft capital, Ray Shero has all the ammunition he needs to make some key trades. Most of all, New Jersey is projected to have over $35 million in cap space this off-season. That’s more than enough room to not only extend Taylor Hall, but sign other big-time free agents as well. If Ray Shero plays his cards right and has a successful offseason, he can persuade Hall to sign long-term with New Jersey.

So What’s the Plan?

Now we have to ask the question, what should Shero’s plan be? Should he look to trade Taylor Hall or look to resign him? Ultimately, the second scenario we previously discussed should be Plan A for Ray Shero. That is, have a successful off-season and convince Taylor Hall to sign long-term with the Devils. With all the draft capital and cap space they have, New Jersey has the potential to make arguably one of their biggest off-seasons in franchise history, one of their most successful ones. If that ends up happening, they should be able to keep Hall in a Devils sweater for years to come.

However, we now have to look at the doomsday scenario; the Devils don’t have a great off-season and Taylor Hall doesn’t sign a long-term extension. If that’s the case, the Devils should ultimately look to trade Taylor Hall before the season begins. Waiting to do so would be way too risky of a move on the Devils’ part. If Taylor Hall plays without an extension and the Devils fall short of expectations again, it would be clear as daylight that Hall is leaving. Therefore, Shero would lose all leverage in trade talks during the deadline. Not only would bidding teams know that New Jersey is desperate, but why would they be willing to part with many or major assets for a potential half-season rental?

As King Regis Lucis Caelum said in “Kingsglaive Final Fantasy XV”, “The paths left to us are few.” Ultimately, Ray Shero and the New Jersey Devils have two paths to choose from when it comes to Taylor Hall. One, is trying to persuade Hall to sign a long-term extension. The other is trading him for the best return possible. Whatever path Ray Shero decides to take, the Devils are under tremendous pressure to get this right. This decision will ultimately end up shaping both the short and long term future of the New Jersey Devils.