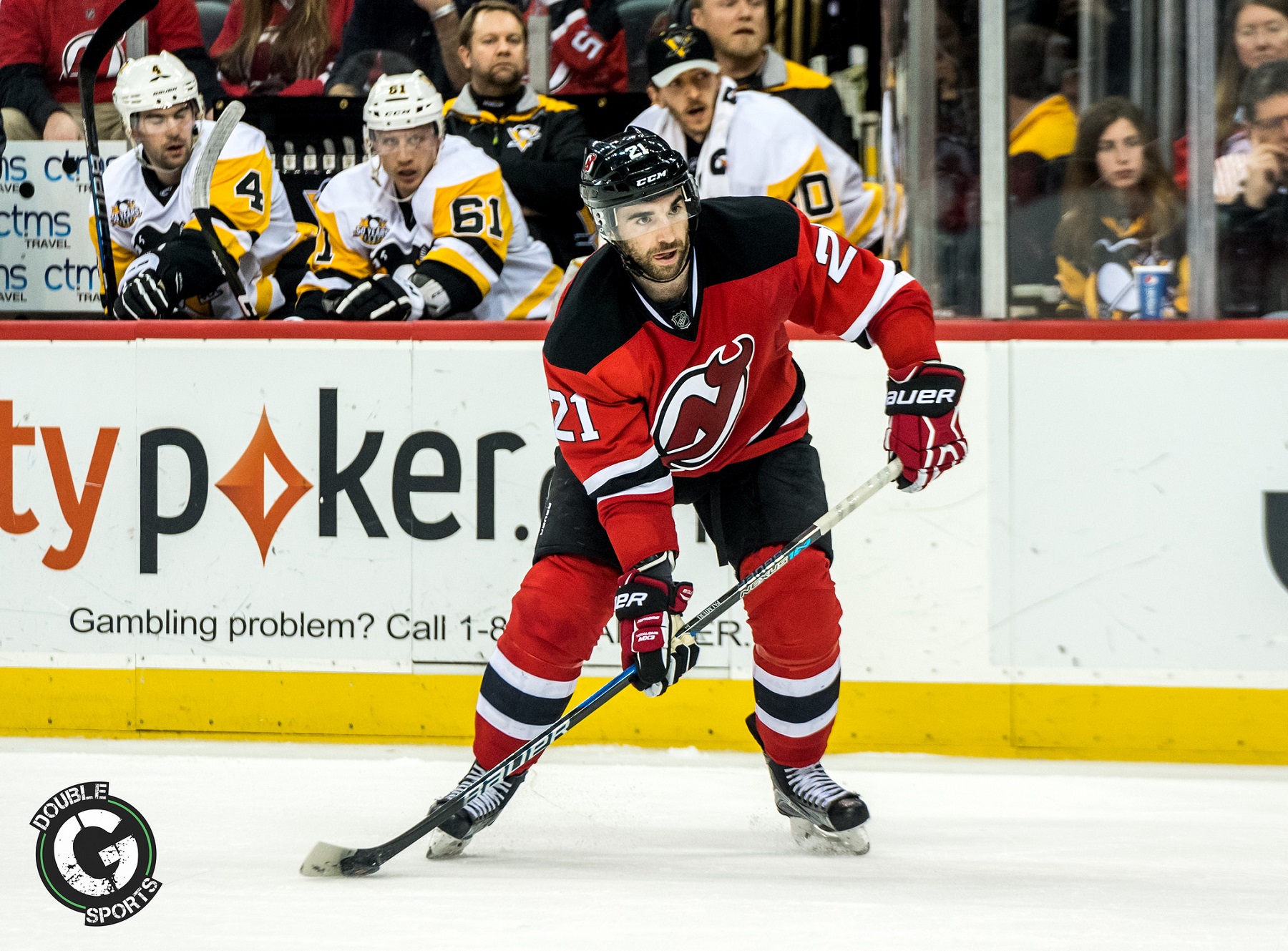 Devils Home Opener is a Stunning Win Against Capitals

Palmieri becomes first Devil to have back-to-back two goal games in the first two games of the season.

The rain canceled the fan fest & red carpet that had been planned for the New Jersey Devils home opener.  However, the Devils’ gave fans a night to remember with a 6-0 win. They showed no signs of jet lag after their season-opening game in Gothenburg, Sweden last week.

Kyle Palmieri even joined Devils history by being the first player to have back-to-back two goal games in the first two games of the season.

The Devils took on the defending Stanley Cup Champions, the Washington Capitals, for the first time in the young 2018-19 season. Before introducing the team and staff the arena did a video montage of classic team moments. In the darkened Prudential Center, the center ice monitors went black and a quote in red filled the screen.  “We can be proud by not satisfied.” – John Hynes was scrolled across the screen. Clearly in reference to the team advancing to the playoffs last year but failing to advance past the first round.

The Devils looked determined early.  From the first puck drop, the team seemed to feed off of the energy in the Rock.  They appeared to be faster and more in tune than the Capitals. The Caps did not look like the team that had opened the season 7-0 against the Boston Bruins. Before the Capitals could get their first shot on goal the Devils already had five.

At 7:02 into the first period Palmieri gave the Devils an early lead by getting the puck passed the Caps’, Pheonix Copley.  Palmieri’s third goal of the season was assisted by Nico Hischier and Damon Severson. A few minutes later the first penalty of the game came when Lars Eller was called for hooking on Hischier.

The only real skirmish of the game came with just under eight minutes left in the first.  During the pushing and shoving, Miles Wood went after NHL All-Star Alex Ovechkin. This landed him in the box with a two-minute roughing minor and gave the Caps their first power play of the night.  Ovechkin was not given a penalty even though he dropped his gloves and continued jawing at Wood after the refs separated the two.

With only 2:15 left in the first John Carlson got his first of two penalties on the night.  With the Devils on their second power play, Palmieri got his second goal of the night with the help of Will Butcher and Taylor Hall.  At the end of the first, the Devils were up 2-0 and were outshooting the Caps 2-to-1.  This trend continued for the rest of the night.

MoJo Gets His First in the Second

Going into the second the Devils continued to play aggressively.  The Capitals continued to play without purpose.  Jakub Vrana got called for tripping 47 seconds into the period. After the Caps killed the Devils third power play of the night Marcus Johansson put NJ up 3-0.  MoJo got his first goal of the season and his first goal since last December.

Stefan Noesen then got called for his first of two slashes on the night halfway through the second.  While on the PK Travis Zajac got a hard shot off on a breakaway that Copley blocked. The Caps struggled on offense all night and did not get their 10th SOG until about 15 minutes into the second.  At that point, the Devils had 22 SOG.

Washington looked sloppy and slow compared to the Devils.  One of the best hopes that the Capitals had all night was a wicked shot that Carlson took on Keith Kinkaid with just about four minutes left in the period.  Kinkaid was on the top of his game and stonewalled him.

One minute into the third Noesen took his second slashing call of the night. Hope had been given to the Caps with the early power play.  Twelve seconds later though, Carlson went back to the box after getting called for tripping Blake Coleman.  Butcher and Jean-Sebastien Dea tried hard to get it passed Copley but were denied. However, both would get their first goals of the season a few minutes later.  It looked like Captain Andy Green would join them when he and Wood were 2-on-1 with Matt Niskanen. Copley, the only line of defense all night for the Caps, denied him. With just over five minutes left Brian Boyle joined the scoring with his first of the season.

The “Cooopley” chant was loud but not as loud as the cheers for Boyle.  Honestly, did any Devil fan think they would be cheering for a Brian Boyle goal…ever?  The Boyle goal was the writing on the wall for the Capitals. Even a late slashing call on Severson could not help Washington.  Kinkaid earned the second star of the night along with a shutout victory.

Looking Forward Into the Season

While it is only game two of the ‘18-’19 season it is not too soon to consider the Devils a contender. The team is clicking and showing positive growth from last season. There will be games where the wheels fall off two seconds in but it seems like those will be far and few between.  The Devils have come far under the short tenure of John Hynes.

There is one point though that might derail what could be playoff bound Devil season.  Corey Schneider might be a square peg in a round hole. After last season’s lackluster performance he started this season recovering from hip surgery.  While it is not certain what Corey’s return date will be it does raise questions. Does Kinkaid go back to number two or is Corey now the back-up.

The Devils will take on the San Jose Sharks on Sunday at home.