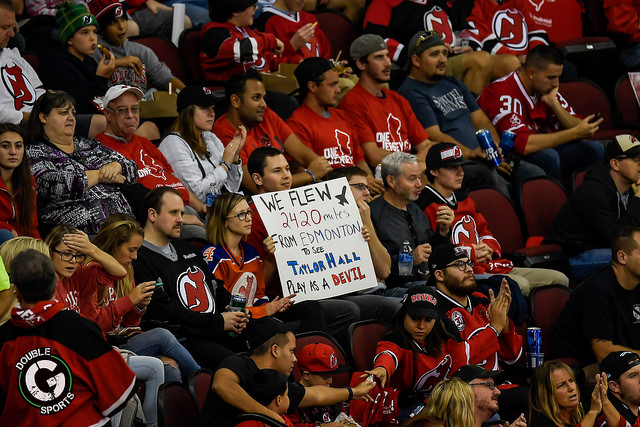 Let’s put the cards on the table, a New Jersey Devils‘ marketing e-mail went out and it was geared at rival fans.  It’s not a great look for the team.  Some are saying we are now scraping the bottoms of the barrel.  We have no fan base.  Insert your teams sucks adjective here_____.  However, there are two sides to every story.  Before you hop a train to Penn Station with pitchforks and torches take a step back and hear me out.

First, no I don’t like the fact that the Devils are marketing to other teams fans.

Yet, I am not angry and not flying off the handle.  I am, however, sad.  Sad that my favorite team and, one I am lucky enough to cover, is being forced to try anything to get people into the seats of The Rock.   That’s right I said forced.  For the 2016-17 season the Devils attendance with 27th in the NHL. Only the Islanders, Arizona, and the ‘Canes were below them.  Let that sink in for a second…their attendance was the 4th worst.  The Florida Panthers had more fans…

The New Jersey Devils are a business.

So let’s be adults for a second and put our business hats on.  You have a product that is at the bottom of its industry, what do you do?  You can either scrap it and take the loss, re-brand the product (which would mean a new city/state in the case), or find new ways to market to a different audience.

I am not about option #1 or #2 folks and I would venture that most true Devils fans would agree.  That leaves option #3.  I have said in the past I have not been a fan of the family first atmosphere of the Rock.  Honestly, I believe it skirts over the line and pushes the fan base out.  That directive though comes from ownership.  Leaving the marketing team to work magic.  Last season they doubled down on giveaways and theme nights.  Most teams have these as well but the Devils marketing staff pushed hard.  If you looked around the Pru Center, however, their efforts were well, not a total success.  That pains me because they are trying really hard.

So do I blame them for going against the grain?

Logically I know that this is what has to be done to get people through the turnstiles.  As a fan though, it’s like a gut punch.  It’s like your boyfriend saying, “You are still my girlfriend but I want to see other people. Oh, and I am still going to live with you and plan our life together.”  Sure you can dump him to the curb and find a new boyfriend like the San Jose Sharks.  There is another option, figure out what is going wrong, talk it out, and get back together.  It’s going to take some time and work on both sides.

For starters, Devils I know you had to do it but maybe go about it another way.  We have the Rangers, Islanders, and Flyers all within earshot.  Boston, Pittsburgh, and DC are not far either.  Just do some campaigning in those markets. Just don’t say, “come see your team play at our arena”. That is hurtful.

Now Devils fans, go see your team play.  The goal song and dancers are things of the past.  But, we have a great team in the works.  We had the No. 1 draft pick and a bunch of young, hungry kids who want to win.  We have a coach and GM who were part of the Penguin’s current dynasty.  This can work, we can fill our arena with Devils fans.  We just need to come together.