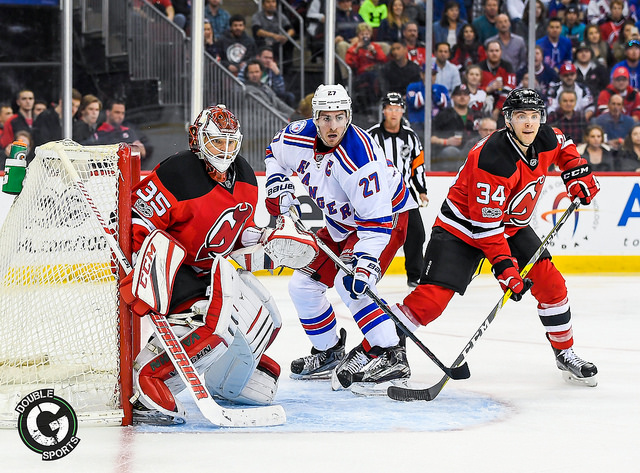 Over the last three games (Ottawa, Rangers, and Montreal) the New Jersey Devils have looked like a competitive hockey team but have been alluded by a W.  With a Month and a few days left in the season it’s a now or never storyline to make it to the postseason.  A postseason that currently includes the New York Rangers , the New York Islanders and Devils are in the running for the last spot.  So how have the last three games since the dismal performance of the 6-4 loss to the Islanders at the Barclays looked different than most?  Intensity.

Last Tuesday the Devils played an Ottawa Senators team that had bested them three out of three meetings to date.  There was something different though as they skated through the first period at the Prudential Center, they looked ready to play not tired like they had two days prior.  They finished hits, raced to the puck, and had some good stick handling.  The Devils did not lose the game due to their play but rather to a team that edged them out.  While Ottawa swept the series with them, that last game showed that the team can compete against play-off level teams.   The Take Away: The Devils can compete, they have the desire.

After resting for most of the week, the Devils took on their cross-river rivals, the New York Rangers.  The arena was electric, filled with Devils (and Rangers) fans.  All 60 minutes of the game were hard fought which led to free hockey after regulation ended 3-3. It was a game where you were on the edge of your seat the whole time.  The Devils skated quick and Kyle Palmieri was the star of the show, taking shot after shot and having two go in.  Unfortunately, that wasn’t enough, Palms had a breakaway shot that looked like it was going to win the game buy Raanta denied him.  That gave the Rangers the puck that would sneak passed Schneider and win the game for the Rangers.  The Take Away:  It was one of the highest SOG games all season for the Devils.  They know how to shot the puck, just need to find the extra something to get it in.

Monday, after two heart break losses, the Devils faced the Canadiens.  The Habs are #1 in the Atlantic and a tough team with goalie Corey Price minding their net.  They also have a new game structure thanks to recently acquired head coach, Claude Julien.  This game had moments of intensity and not nearly as much fighting as I personally thought there would be (you might remember Price using his blocker to punch Palms in December).  The Devils matched their play.  It was in my opinion one of the best games they played all season because they were able to compete against a #1 team.  Had there not been a penalty in OT, it might not have gone the way of the Habs…just saying.   The Take Away: Overall they Devils can play, they need to have a strong finish though as that is where they see to lose it every time.

The Devils take on the Capitals in Washington on Thursday, Bruins in Boston on Saturday, and the red hot Blue Jackets on Sunday.