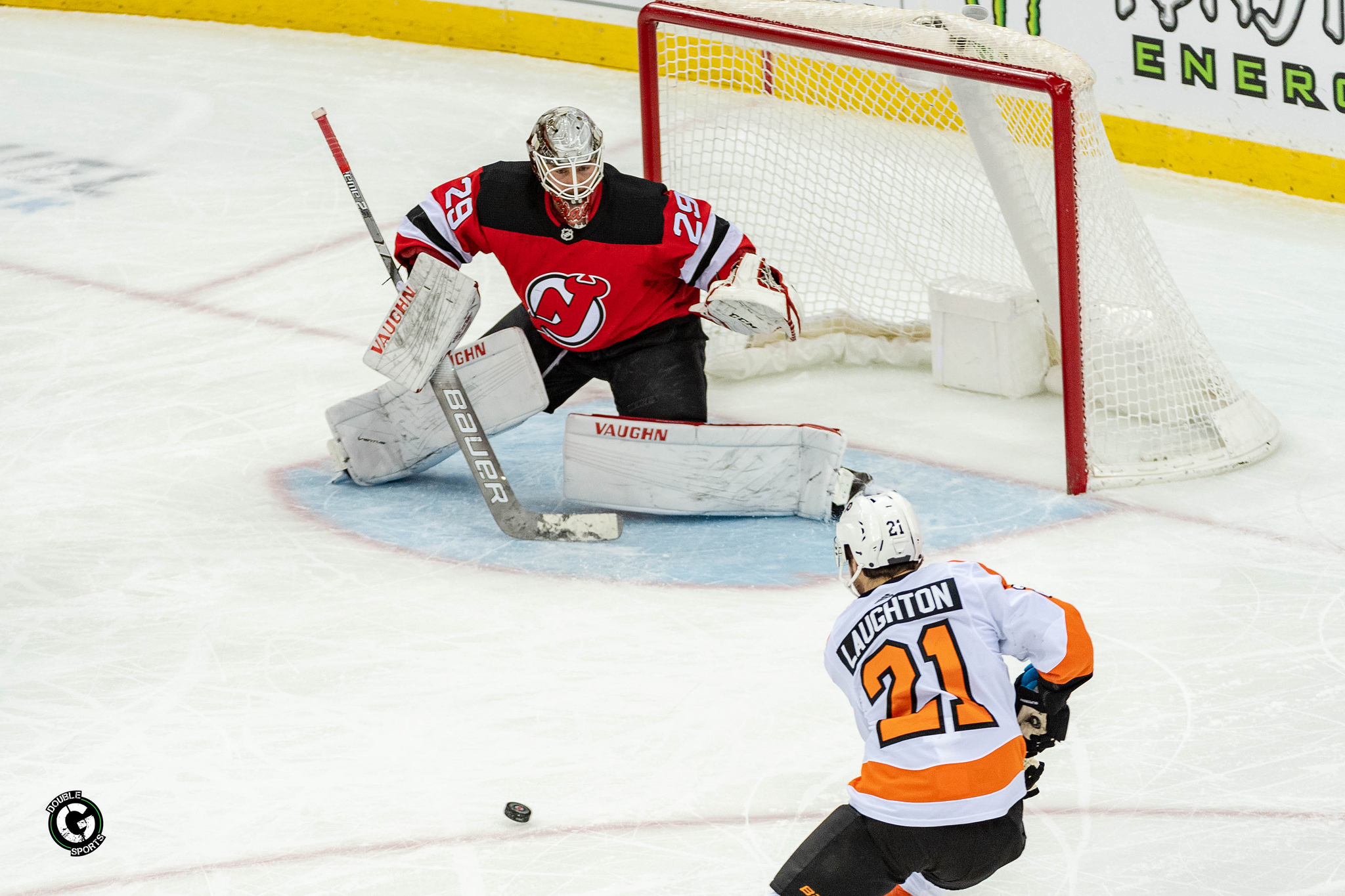 The latest installment of The Battle of the Turnpike saw the New Jersey Devils defeat the Philadelphia Flyers 3-2 at Prudential Center.

This was a game both teams needed to have. Desperate for points and sitting at the bottom of the division, the Devils and Flyers went head to head for the third time this season, with the teams splitting the first two.

New Jersey came out firing on all cylinders. Flyers starting goaltender Carter Hart was peppered with shots in the opening minutes of the first period. The Devils were poised to try and jump put to an early lead and never look back.

Defenseman Damon Severson got the Devils on the board with his sixth goal of the season just 6:32 into the first period. Severson was the beneficiary of some slick puck work by both Pavel Zacha and Drew Stafford.

Zacha skated out from behind the Flyers net and found Stafford filling in for Severson at the point. Stafford received the pass, skated into the slot and found a wide-open Severson inside of the right faceoff circle. Severson unloaded a one-time blast that went over the shoulder of Hart and into the back of the net.

Although the shot total was even at 12 after the first 20 minutes, the game was not. The Devils dictated the pace of play for the majority of the period. New Jersey had Flyers hemmed in their defensive zone while moving the puck around them. The Devils found the high-danger areas with ease but Hart kept the Flyers in it.

The intensity of this rivalry began to pick up in the second period. Both teams seemed to play with an edge that was not present in the first. Checks were being finished, net-front presence was stronger in both ends of the ice and each team exchanged pleasantries once or twice. The season-long frustrations of both teams surfaced and were made evident throughout the middle frame.

The Flyers and Devils traded penalties early on in the second but neither team could capitalize on their power play opportunities. Fortunately for New Jersey, something positive came immediately after a Nico Hischier hooking penalty that brought the packed Prudential Center crowd to its feet.

After serving his two minutes, Hischier exited the box, immediately stripped Flyers defenseman Travis Sanheim at center ice and slipped a shot through the five-hole of Carter Hart. Hischiers 13th goal of the season put the Devils up 2-0.

“I got a stick on it that led to a breakaway,” Hischier said. “I missed a couple breakaways this season already so it feels good that it went in.”

Hischier is having himself a respectable sophomore season. In 40 games played this season, 2017 first overall pick has 31 points.

New Jersey native James van Riemsdyk cut the Devils lead in half with just over four minutes left in the second period. After taking a defensive-zone pass off the boards from Sean Couturier, van Riemsdyk gained the blueline and lifted a shot over the shoulder of Devils Mackenzie Blackwood.

New Jersey was holding onto a 2-1 lead through 40 minutes, looking for a little insurance. Just over a minute into the third period, Miles Wood gave New Jersey that insurance.

Blake Coleman skated around the net and wristed a puck towards the Flyers net. Hischier was jamming away in front, but Wood crashed the net late and pushed the rebound past Hart.

“[Coleman] did a great job just getting the puck on net there,” Wood said. “The goalie didn’t know where it went and I just tapped it in from there.” Wood acknowledged that he would like to get to the paint a little more. He knows that it where the goals come from.

The remainder of the third period saw the Flyers push the pace a bit more. Trailing by two, the Flyers were throwing anything they could at Blackwood. In the final minutes of the game, the 22-year-old rookie was up to the task.

“I was happy with my game and my overall performance, but the team played great in front of me,” Blackwood said. “I was just trying to get set, play a little deeper and give myself a chance to make some saves.”

After missing the previous three games with due to a minor lower-body injury, Blackwood picked up right where he left off. Blackwood recorded his fourth NHL win while stopping 32-of-34. Through nine career NHL games, all this season, Blackwood has posted a 1.85 Goals Against Average with a .947 Save Percentage. His teammates know how much he means to this team.

“He’s come up and played really strong in each game he played and made huge saves,” Hischier said. “It is his confidence that gives us momentum.”

New Jersey’s attention to detail is what helped them come away with two points this afternoon. The game plan was clear and it became evident that the Devils followed their plan from the drop of the puck.

“This league is so tough to play if you don’t play detailed enough,” Hischier said. “I think tonight we came out strong, played detailed enough to win the game and it feels good.”