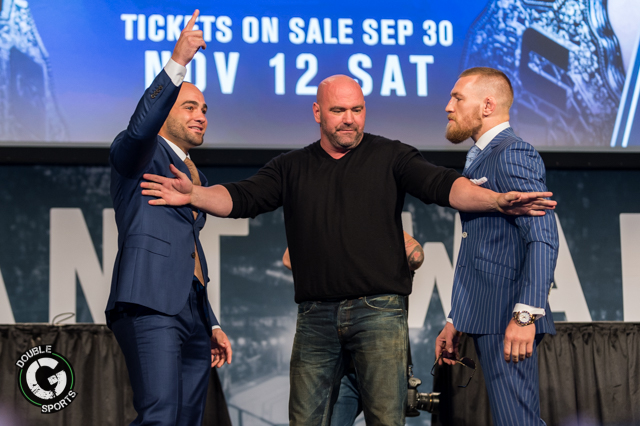 Would it be a Conor McGregor press conference without fireworks?

The McGregor-Alvarez fight was added to the UFC 205 card late Monday night and with the addition of the fight, Tuesday’s press conference became a bigger war of words than Monday night’s presidential debate.

McGregor sat on the stage at the Theatre of Madison Square Garden with his dark sunglasses on which resulted in arguably one of the funniest interactions of the press conference.

With more colorful language of course, Eddie Alvarez asked McGregor to “take those sunglasses off.”

The two did not fail to fire up the already rowdy crowd with constant attacks at each other. From McGregor calling it a “40 million dollar year,” for himself to Alvarez calling McGregor’s current belt a “little boy belt,” the two were all over each other.

On November 12, McGregor will look to make history as he looks to take home a second title while already having the featherweight belt. Now, it’s unclear what officially would happen if he wins, McGregor has his own idea.

“I’m going to wrap one on one shoulder and wrap the other one on the other shoulder. It will take an army to come take those belts off me,” he said.

Reflecting on the loss of Jose Fernandez
UFC 205: A New York State of Mind
Posting....