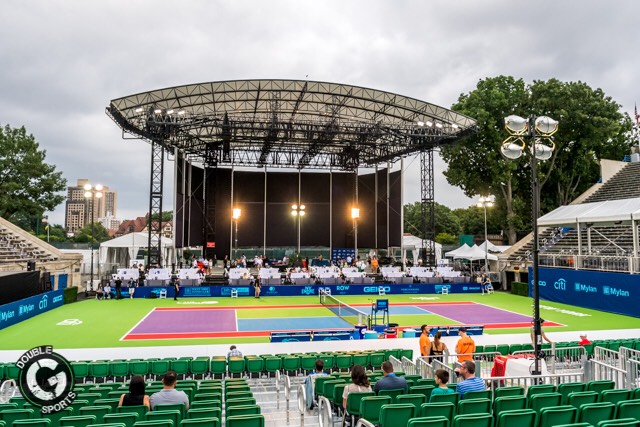 Thursday night, New York Empire faced off against the Orange County Breakers. Empire had lost eight games straight and was looking to turn the tide. It appeared in the first event of the evening, women’s singles, they would.

Empire’s Tatjana Maria had a strong start against the Breakers’ Yanina Wickmayer. With aggressive groundstrokes and charges to the net, Maria an early break to get a 3-1 edge. Wickmayer made a push to get the break back, getting three break chances but Maria was able to save all the breakpoints and hold for a 4-1 lead. The set ended with Maria and Wickmayer trading holds. Empire won the first set 5-2.

Men’s Doubles saw Neal Skupski and Mardy Fish go against the Breaker’s Marcelo Demoliner and Mackenzie McDonald. Strong groundstrokes, aggressive returning, and attacking volleys got the Breakers to a 4-0 start. Empire mounted a comeback winning the next two games also with powerful groundstrokes and solid net play. But in the end, McDonald was strong on serve, giving the Breakers the set at 2-5.

McDonald’s serving would continue in the next even when he faced off against Mardy Fish in the men’s singles. Mackenzie McDonald, who won the 2016 NCAA Division I Men’s Championship in both singles and doubles, used his speed and aggressive groundstrokes to frustrate Fish. McDonald immediately broke Fish to gain the advantage. From there McDonald serves and defense allowed him to win most of his serving games handily. McDonald was able to get a second break to win the set for the Breakers, 2-5.

Next up was women’s doubles. Tatjana Maria and Maria Jose Martinez Sanchez battled against Andrea Klepac and Yanina Wickmayer. Both teams were able to hold to even the match at 1-1. Then the combination of aggressive returns by the Breakers along with a double fault by Martinez Sanchez gave the Breakers the lead. They would never look back, easily holding serve. The Breaker would break one more time to win the set 2-5.

The last event of the evening was mixed doubles. It was Skupski and Martinez Sanchez versus Klepac and Demoliner. Once again, the Breakers broke immediately, dismissing any hope Empire had at mounting a comeback. Although Empire was able to hold serve the remaining of the match, the Breakers were able to do the same. Demoliner emphatically put away a volley that sealed the match for the Breakers. Breakers won the set 3-5. Breakers won the match 22-14.