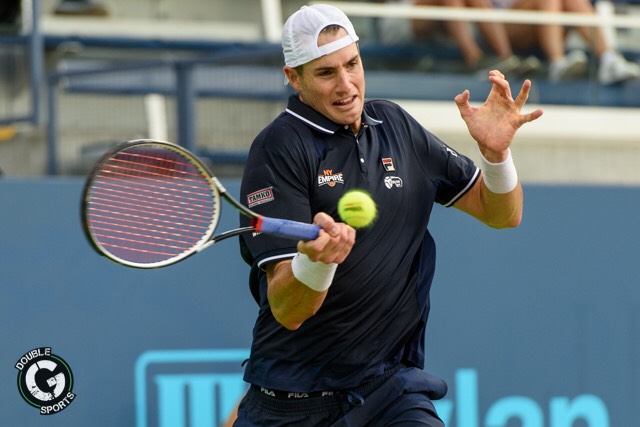 NY Empire avoided losing three matches in a row by defeating the Orange County Breakers in a dramatic match, that saw the teams switch venues due to the rain.  Empire was looking to get back on the winning side after suffering defeats to the Washington Kastles and Philadelphia Freedom the two previous nights. Players before the match admitted that they were “tired” and “sluggish” against the Freedom and were feeling much better a good night’s rest. Mardy Fish alluded to his distaste for the schedule (This match would be Empire’s fifth straight game) and which he said players were tired from having to play “back to back to back to back to back”.

Empire were off to a great start winning the mixed doubles and ladies singles events handily. Kristen Flipkens and Neal Skupski defeated Andrea Klepac and Ken Skupski (Neal’s brother) in the mixed doubles 5-2. Flipkens then took out compatriot Yanina Wickmayer in the singles 5-3.

The ladies’ doubles was topsy-turvy with the teams trading breaks in the early games.  With the Breakers leading 4-3 and serving for the set mother nature intervened, halting play with rain. Sensing that the rain delay might be long or that the courts wouldn’t dry fast enough after the rain, tournament officials decided to move the remaining matches to the indoor courts in the Chase Center.

Players had to wait through a near hour rain delay before resuming play, in which they were sandwiched between fans sitting in white folded chairs. Once back on court Empire broke Orange County and forced the tiebreaker.

The Breakers immediately took control winning both points on the Empire serve. With some strong hitting from Flipkens and good net play from Sanchez, Empire got back both breaks and tied it all up at 3-3 but the Breakers were too strong and won the next two games to take the set.

In the men’s doubles Mardy Fish and Neal Skupski appeared to be heading for the set win when they broke at 3-2 to take a 4-2 lead against Teymuraz Gabashvili and Ken Skupski). However, the Breakers were not having it, winning the next two games to force the tiebreaker.

Empire immediately drew blood, taking the mini-break from the Orange County on their second service point. Strong serving from Mardy along with an another mini-break allowed the Empire to win the tiebreaker 5-2.

Going into the final set, Mardy just had to win the set to get the win for Empire. Gabashvili came out aggressive making it clear to Mardy that it would not be easy. Gabashvili had two break opportunities because of his hitting but Fish used his serve to get out of trouble and hold for the 1-0 lead.  The next couple of games Fish and Gabashvili exchange heavy groundstrokes and held on their serves to tie it all at 3-3. At this point Gabashvili would put the pressure on Fish with his hitting to get the break. He would then serve it out forcing extended play.  The total games were Empire 22 games, Breakers 19 games.

Anytime a team that is in the lead fails to win the final set, the match goes into extended play. In extended play, the leading team (in terms of total games won) just must win one game before the total games are even. In this case Mardy just had to hold serve, since he served first. However once again Gabashvili applied the pressure and Fish cracked, giving up another break and bringing the total games Empire 22 to Breakers 20.

Showing monumental heart Gabashvili held his serve, putting the Breakers just one game behind Empire (23-21). But proving he also has heart and an ability to recovery, Mardy held his serve easily giving the Empire the win 23 games to 21 games. A wild finish for a night that had to be altered because of the rain.