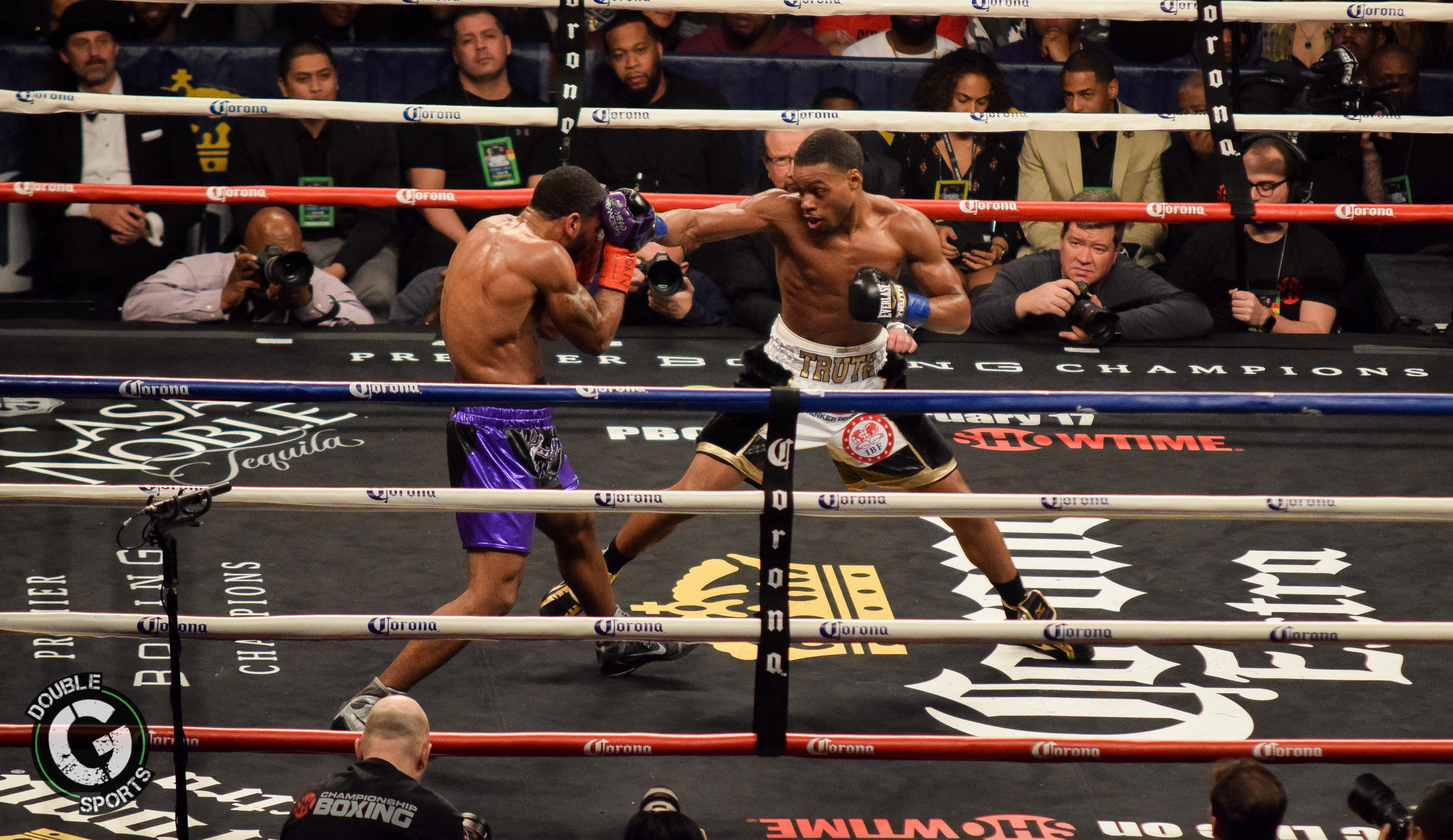 Behind a dominating performance, Errol Spence Jr retained his IBF welterweight title, by stopping Lamont Peterson after the seventh round when trainer Barry Hunter took a long, hard look, and made the call to save his gutsy fighter from himself in front of a ruckus crowd in Brooklyn.

It was the right call by a good trainer, as Spence (23-0, 20 KO) was simply dominant in this fight, overpowering Peterson (35-4-1, 17 KO) and walking through his challenger’s best shots.

Spence, 28, dropped Peterson in the fifth round, and pretty much owned the ring throughout. It was a game performance by the 33-year-old Peterson, who hit Spence with some good shots, but Spence simply wouldn’t budge.

“My coach came with a great game plan, and I just followed through with it,” Spence said, adding, “I know Lamont. Lamont’s a tough fighter, he’s gonna give it all he’s got. He’s willing to die in there. His coach had to stop the fight. He wanted to keep going. That’s who Lamont is.”

Despite earning the win in commanding fashion, Spence still believes he has room to improve. “I still can improve a lot on my defense,” said the unbeaten world champion. “I just have to keep perfecting my skills and keep progressing. You’re going to see a better Errol Spence next time I get in the ring.

“Everybody knows I’ve been waiting on “Some Time” Thurman,” said Spence, looking ahead to a possible unification match with WBC and WBA Welterweight World Champion Keith Thurman.”

“Since I was 15-0 I’ve been calling this guy out and he keeps making excuses. Let’s get it on.He has two of the belts and we both have big names. It’s an easy fight to make and I want it.”

Robert Easter Jr  had his share of trouble with Javier Fortune in Brooklyn, but when it was all said and done, Easter earned a tough split decision win to retain his IBF lightweight title.

Easter was largely unable to use his superior height and reach to his advantage, as Fortuna buzzed around him like a gnat and made things difficult for the Toledo native. Fortuna, 28, probably did his best work counter punching.

“It was a tough fight, he’s a former world champion for a reason.” Easter Jr said in the post fight conference.”We made it tough trying to counter punch. He wasn’t throwing much and it made it difficult for me to chase this guy around.”

“I couldn’t get the knockout but we got the win and that’s all that matter. I knew he was going to run once he felt my power. He just wanted to grab and hold the whole fight.

A hot bottom question after the fight was will we possibly see a rematch between these two fighters? Easter Jr quickly shot that idea down.

“I want to fight the champions and unify this belt.” Easter said.” Fights like these aren’t in my game plan. I’m ready for Mikey Garcia and Jorge Linares to sign the contract.”

He added, “I got the W and that’s all that matters,” while also saying that the Brooklyn crowd was booing not because they felt he lost, but because he failed to get the KO. This is very debatable.