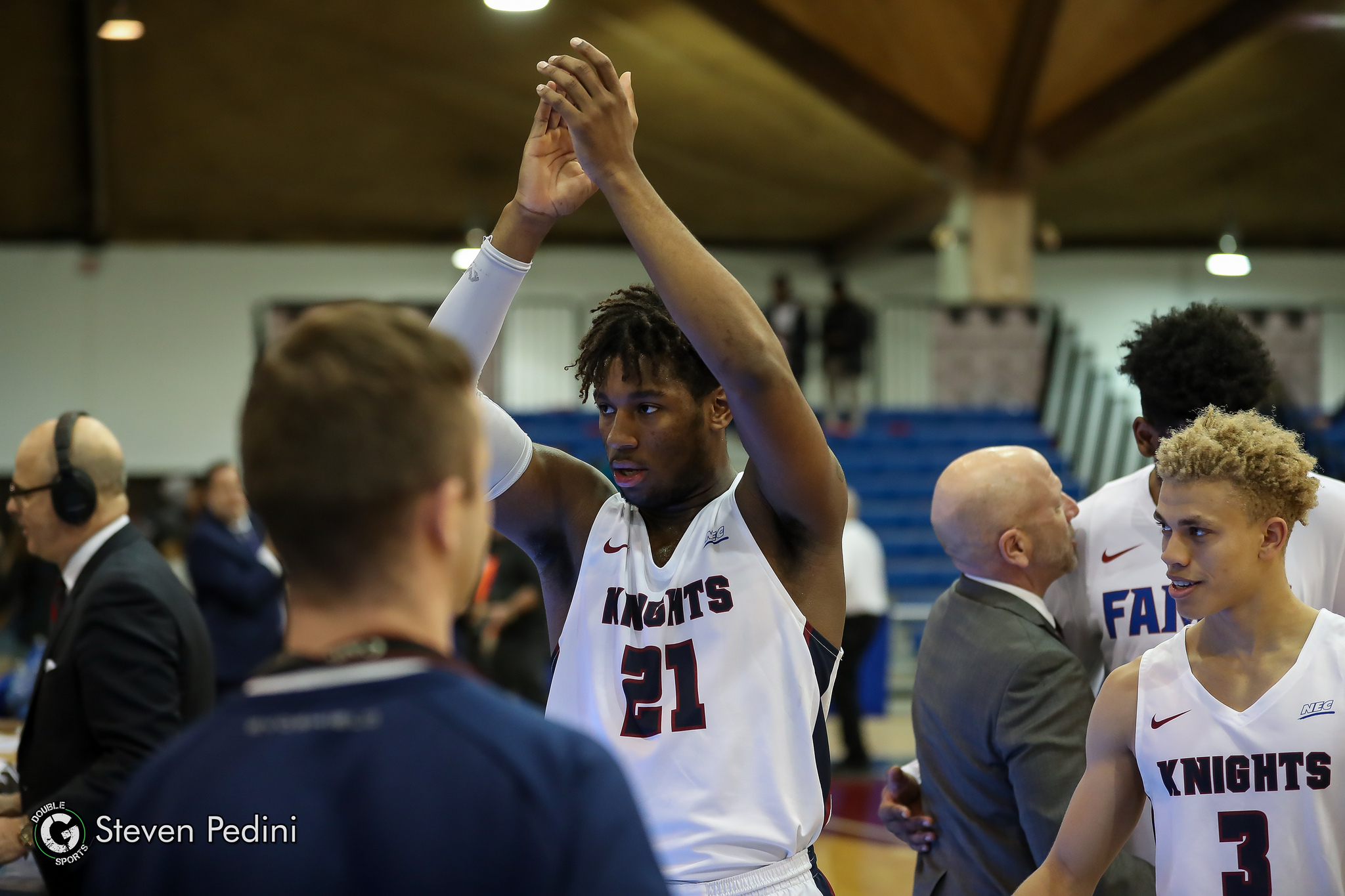 Heading into Tuesday’s Northeast Conference Tournament Championship Game against the number one seeded Saint Francis Red Flash (18-14) at DeGol Arena in Loretto, PA the Fairleigh Dickinson University Knights (20-13) men’s basketball team was on a roll, winners of seven in a row including a thrilling 66-62 win over Robert Morris in the semifinals on Saturday.

The Knights had luck heading into the final as the second seed had won the previous three NEC titles and four of their five championships. On the flipside, the last time FDU and Saint Francis played in the NEC title game in 1991, the Red Flash defeated the Knights 97-82.

Playing in a full packed arena that seated 3,500, Saint Francis fed off the energy of the home crowd early, jumping out to an 11-2 advantage within the first three minutes of action. However, the Knights managed to regain their composure, holding the Red Flash without a point for over three minutes while reeling off a 16-2 run. Tied at 18-18 with less than 10 minutes remaining, FDU caught fire from beyond the arc and scoring nine out of the 11 points to build a 32-25 advantage with five minutes to go.

The Knights were absolutely sizzling from the perimeter in the first half shooting 62 percent from the field. Even with a technical foul assessed against Head Coach Greg Herenda with two minutes left, Saint Francis could not take advantage at the free throw ending up a paltry 1 for 9 in the half. Kaleb Bishop poured in 12 of his 20 points.

In the second half, Saint Francis managed to cut the deficit to five-point at 46-41 with less than 17 minutes on the clock. FDU countered that led by senior guard Darnell Edge knocking down a trifecta to bump the margin back up to 50-41 at the 14-minute mark. The Knights dominated the points in the paint at one point up 30 to 18.

Fouled on a three-point attempt with less than nine minutes left, Edge sank all three free throws from the charity stripe line. Sophomore Elyjah Williams worked both ends of the floor 25 seconds later, first swatting away a shot and then converting a three-point play on a lay-up on the offensive extending the advantage to double digits at 63-52.

The Knights did a masterful job defensively on conference player of the year Keith Braxton, averaging 16.2 points per game, Braxton scored 10 points on 4-of-9 shooting. Limited to five points in the first half, Jahlil Jenkins exploited the inside/outside game making four field goals while going a perfect 6 of 6 from the free throw line finishing up with 20 points. After Saint Francis trimmed the lead to 71-63 with less than four minutes remaining Jenkins scored five points including burying a step back triple to make it 76-65 with 2:50 left.

The Red Flash continued to struggle from the free throw line hitting just 3 out of 8 in the second half and overall 4 of 17. Meanwhile FDU could not miss draining 16 out 18 and 18 of 20 for the game as the Knights won 85-76 and won their first NEC Tournament Title since 2016 and sixth overall in school history. Edge tallied a game high 21-points, a perfect 7 for 7 from the free throw line and Elyjah Williams and Mike Holloway Jr. each contributed 12 points apiece.

FDU earned an automatic NCAA Tournament bid and will find out what region they will be playing in on the NCAA Selection Show on Sunday.