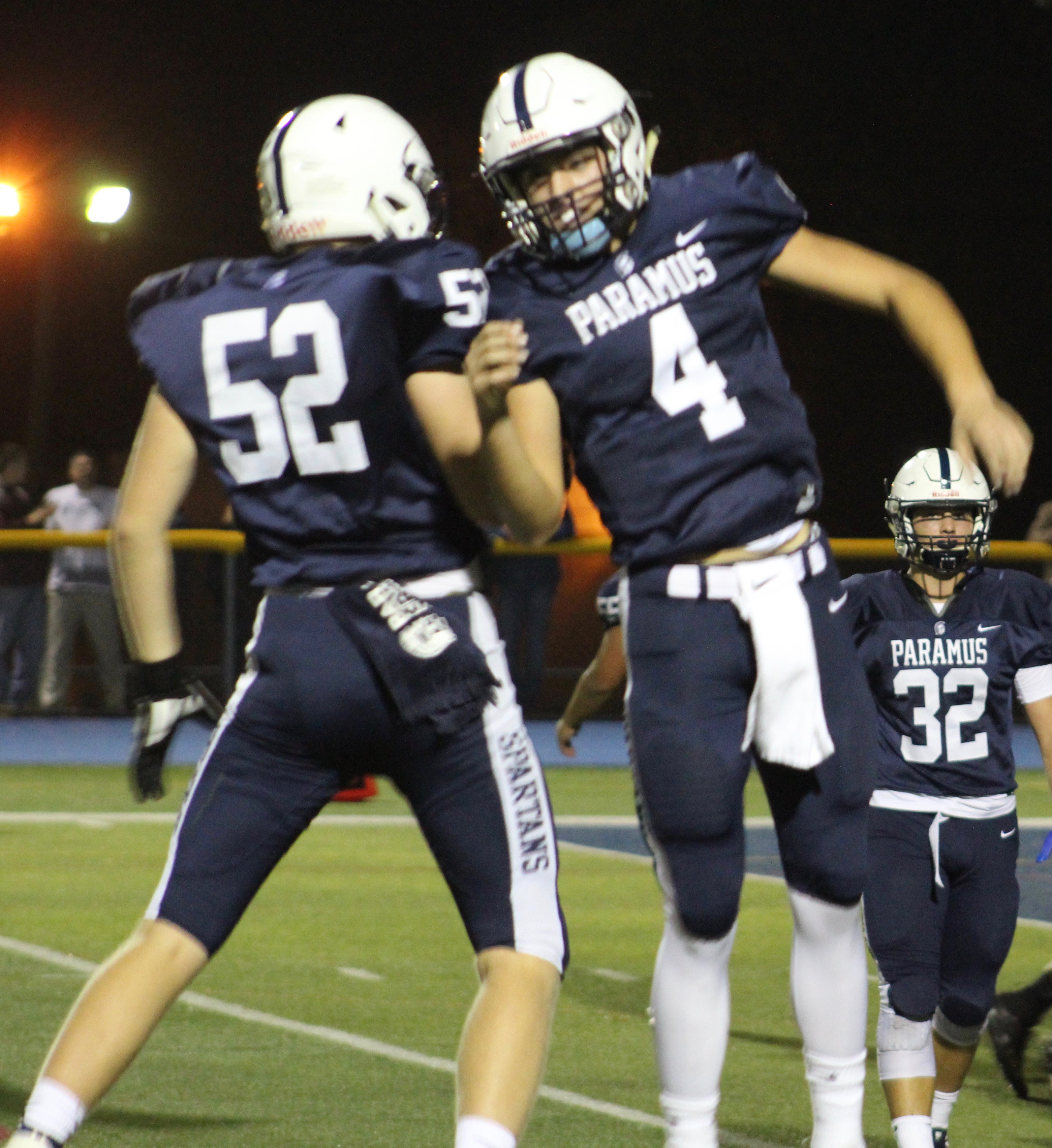 Paramus Spartans Head Coach Joe Sabella emphasized the importance of wanting to start fast since the Spartans had been doing it all year. The team followed the blueprint to a tee in the first quarter of the North 1, Group 3 first-round playoff game against West Milford (5-5) at George W. Hodgins Stadium (Paramus High School).

Receiving the opening the kickoff after the Highlanders won the coin toss and deferred, it took Paramus just four plays, 63 yards and using one minute of the clock as junior quarterback Trevor Bopp (8 rushes for 76 yards) scored on a seven-yard run.

The Spartans defense managed to force West Milford’s offense into a pair of three and outs. Starting out at the 39-yard line, Bopp (7 of 11 for 125 yards) orchestrated a nine-play drive that chewed up almost four minutes, resulting in a 19-yard touchdown pass down the middle of the seam to senior wide receiver Matthew Ivanicki.

“From the start we had a lot of juice and offensive line blocked great and opened up huge holes for the first four holes and got in with ease,” said Trevor Bopp. “It all started in practice, we preached never stepping off the gas and playing hard on every single play because it could be the last one for the seniors.”

The Highlanders offense continued to struggle with another three and out. Paramus flashed the quick strike ability once again. First starting with Bopp completing 47-yard pass to a wide open Justin McKeon, Jacob ripping off a 37-yard run and Bopp finishing the drive off blasting straight ahead free into the end zone making it 21-0 32 seconds into the second quarter.

West Milford’s offense finally got on track on the ensuing drive with their first first down of the contest but the Spartans relentless defense was on display with senior defensive lineman Josh Ferro sacking Highlanders quarterback Zack Milko and forcing another punt.

After a short punt, it took just two plays before Paramus found the end zone again as Jacob (11 carries for 176 yards) gashed the defense scampering 55 yards to pay dirt, extending the margin to 28-0 with 8:19 left. Towards the tail end of the first half, the Highlanders attempted a gutsy fake punt from deep inside their own territory but the Spartans special teams would not be caught off guard.

“Just using my vision and the offensive line opened up the holes as they have been doing all year long,” said Kyle Jacob. “Driving down quickly and scoring showed the other team we’re here ready to play. Coach (Sabella) talked about hard work on every drive and running the ball as hard as we can.”

“Our defense did a great job of making the pocket smaller, our linebackers Matt Amato and Brandon Dell/Colle did an amazing job filling the holes and out secondary Matt Ivanicki, Steve Prado and Sean Marrazzo did a great job covering their wide receivers.”

Starting at West Milford’s 20, Jacob continued to pound the rock quickly gaining 15 yards setting up a first and goal situation. One play later Jacob displayed a nifty cut back run and rumbled into the end zone with 27 seconds remaining.

Bopp capped off his stellar performance on the Spartans first offensive series in the third quarter. Aided by a couple of personal foul penalties assessed against the Highlanders defense, Bopp slashed through the defense untouched for a 11-yard score leading to a running clock the rest of the game due to the 35-point rule and allowing the starters to come out and rest.

West Milford’s offense did not cross midfield until the fourth quarter. The Highlanders scored a couple of late touchdowns to avoid the shutout. With the victory, Paramus (10-0) tied the school record for most wins in a season. This sets up a highly anticipated re-match and showdown against neighboring River Dell (7-3) next Friday (November 9) at home with kickoff set for 6 p.m.

Back on October 19, the Spartans narrowly defeated the Golden Hawks 20-13 at River Dell High School.

“Our success this year starts with the offensive and defensive line,” Sabella said. “The seniors have built an unbelievable relationship where they feed off each other’s energy. At this time of the year in the playoffs you have to sustain a running game. Going into halftime up 35-0 was comfortable but only when that buzzer sounds and nice to get out injury free.”

“We know what we’re going to get next week. Coach Nimphius the job he did against Ramapo the last two years and beating them in the playoffs. We have our hands full and have to get to work. We’re extremely proud of the accomplishment, 10 wins is a hard thing to do but I firmly said it won’t feel good if we go home early and focus is to get to the very end.”