May 12, 1925 – Lawrence Peter Berra was born. On this same day 92 years later we honor him with an awards dinner in New York City at The Plaza Hotel. The awards dinner honors his legacy and the values he brought, not only to the game of baseball, but every person that had the pleasure of meeting him. We also recognized the Yogi Berra Museum and Learning Center in Montclair, New Jersey.

Along with honoring Yogi Berra himself, the night was set to honor a couple of other great people and organizations as well. The Humanitarian Award recipient was the McMullen Family Foundation, who are benefactors to the Yogi Berra Museum. The McMullen Family Foundation serves the community by assisting children to strive for higher education and also funds for human services.

The Yogi Berra Museum Teammate Award recipient was former World Series Champion and starting pitcher for the New York Yankees from 1975-1988, Ron Guidry. You may be asking yourself: How did Guidry win the teammate award when the two never played together? Well, when speaking to him, he pondered at the same question. But if he had to guess, it would be because the two were inseparable at the Yankees’ Spring Training camp for over a decade. When asking him how that all came about he said he had seen Yogi a couple months before Spring Training and told him, “If you ever find out your travel arrangements, I get there early, call me. I’ll come pick you up at the airport.”

Guidry also added that Yogi enjoyed a routine. “He’s a traditionalist; once he does one thing it stays like that all the time. So once I picked him up the first time, no one else picked him up.”

As the two continued venturing out to Yankees Spring Training year after year, he spoke about how close the two became. “The relationship just grew. We just kept getting closer and closer and we had a great time with each other.”

Guidry also learned a lot from Yogi in terms of the game of baseball. “We went out to supper just him and I. That’s how I got to learn about a lot of great ballplayers. Talk about him catching when Ted Williams was hitting, what was it like calling against them, trying to set them up, trying to get them out. As a pitcher it was great to have him there to talk to.”

One of the coolest moments Guidry remembers was when Berra escorted him through his Museum and he asked Yogi to point out some of his favorite items. The one that stood out to Berra the most was an old catcher’s glove that former Yankees catcher Bill Dickey had given to him. He said that Dickey showed him how to break the glove in and really mentored him in all things related to catching.

The Yogi Berra Museum Service Award recipients were the football brothers of Devin and Jason McCourty. Devin is a defensive back for the New England Patriots and Jason is currently a free agent defensive back. Devin and Jason earned this award because of all the community service they’ve done by utilizing the platform they have in the NFL. “The McCourty Twins – Tackle Sickle Cell” is their biggest project so far. They created this in order to educate the public, increase blood donations and to raise money and awareness to fight against the disease that is sickle cell.

In addition, the two run football camps in their hometown of Nyack, New York in the off-season. Devin hosts a charity casino night in Boston, and Jason hosts a comedy night in Nashville, Tennessee.

Devin wasn’t a big baseball player or fan growing up in New York, but he did root for the Yankees. When asked what this award meant to him he said, “It’s an honor. Yogi was a little before my time but when doing some research, I saw all the things he did off the field. He gave back to the youth and tried to inspire kids by giving them learning centers and gave them a fighting chance.”

Devin was very appreciative of the award but admitted he and his brother weren’t expecting something like this, stating “It’s a little too big for us, I don’t think we’re there yet.”

Another former Yankee that was in attendance on Friday night to honor his good friend Yogi Berra was Willie Randolph. I asked Willie what the first thing that comes to his mind when he thinks of Yogi, and he stated, “How good of a guy he was, down to earth, big celebrity, unbelievable player, Hall of Famer. That’s why people loved him, that’s why if you walk to any corner of the world people know who Yogi Berra was.”

Randolph also shared some personal memories he cherished during his time with the great Yankee catcher: “I think about the personal time we shared together. When I was managing the Mets during the Subway Series, he would sit with me in my office and that meant a lot to me because I was all excited about the game and we would just talk baseball all the time.”

Being able to learn from a guy like that was also a privilege when Randolph played. “I had him as a coach, as a manager and we had that bond for a long time but he never wavered, he always stayed true to that.” Randolph stated. “There’s something to be said, especially in this game, staying humble and to be consistent with who you are. Yogi was always the same all the time and I respected and loved him for that.”

Lawrence Peter Berra was a great ball player, we all know that and statistics will show that. What stats don’t show is how great a person he was. That sentiment was echoed by all who knew him and those memories were shared glowingly amongst those in attendance at The First Annual Yogi Berra Museum Awards Dinner. I certainly learned a lot about the man beneath the iconic number 8 pinstriped jersey on Friday night, and I definitely envy everyone who had the pleasure of knowing him. 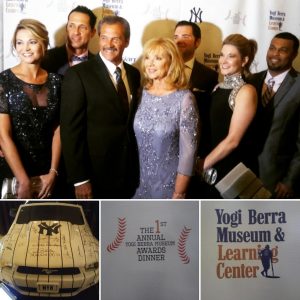 Greg is a Staff Writer here at DoubleGSports.com, covering a variety of topics.