NEW YORK, NY – Excitement, laughter, and a competitive edge hit the tennis courts Wednesday evening at the Vanderbilt Tennis Club inside Grand Central Terminal in Manhattan for the first annual AKTIV Against Cancer Tennis Pro Am charity event. Attendees received the VIP treatment getting up close and personal with one of the best tennis professionals out there – James Blake.

Blake, who continued to play tennis after the loss of his father in 2004 to gastric cancer, has made a mark in support of cancer research. In 2008, Blake established the Thomas Blake, Sr. Memorial Research Fund in efforts of early detection of cancers at Memorial Sloan Kettering Cancer Center. Since then, Blake’s charity – The James Blake Foundation has raised over $1 million dollars for the fight against cancer. 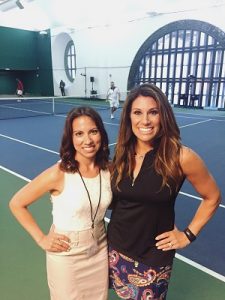 AKTIV Against Cancer, founded by nine-time New York City Marathon champion Grete Waitz, who passed away in 2011 from cancer, and Helle Aanesen in Norway, in 2007, has helped raise more than $14 million dollars and create 15 physical activity centers towards cancer treatment in their country.

With the support of James Blake, SNY Broadcaster, Michelle Yu, CBS Sports Anchor and MC, Tina Cervasio, and Flywheel Sports CEO, Sarah Robb O’Hagan, attendees at the AKTIV Against Cancer event had the opportunity to interact, take pictures, and watch a doubles match on the massive court.

“I’m thrilled to be a part of it [event]. My foundation has a backing for cancer research, we have the same cause, so I really want to help any cancer research fund or foundation that is going to make a difference and hopefully have less people, less families impacted by cancer. So, when I get asked to do these things, and all I have to do is go out and play tennis, which I love to do, it’s my pleasure to be a part of it,” Blake said.

Throughout the night, competition was fierce, as Michelle Yu, a former college tennis athlete, showed off her skills on the court.

During a quick water break, Blake served a few balls to those in attendance. Even former NFL linebacker, Tony Richardson, who came out to show support for the cause, was impressed by the participants who showed their skills.

“I only wanted to be the ball girl,” Sarah Robb O’Hagan said, laughing, who was Blake’s partner on the court.

New and cutting-edge research, the AKTIV Against Cancer continues to support the benefits from exercise therapy for cancer treatment and prevention. With the support of The James Blake Foundation, hopefully a cure for cancer will come relatively soon.

Lori is a Staff Writer for Double G Media, with a main focus on events in the Tri-State area. She is also the LIU Post Football Beat Writer.