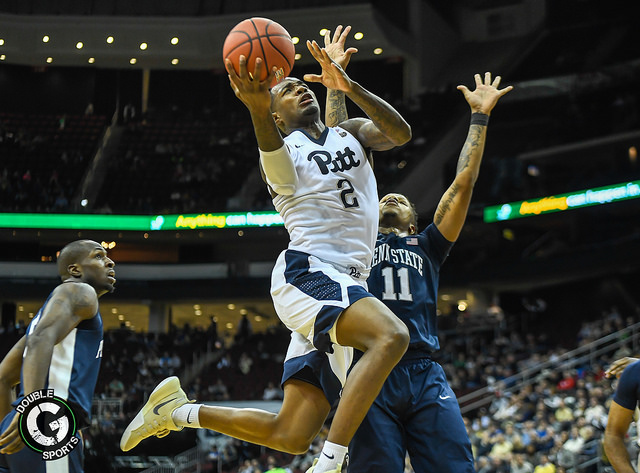 Michael Young (St. Benedict’s Prep, NJ) is putting the finishing touches on a sensational career playing for the Pitt Panthers.

I had a birds-eye view of Young at work on Feb. 8 when he torched Boston College for 30 points (third time this season) in leading Pitt to an 82-73 win over the Eagles at Conte Forum. The 6-foot-9 senior forward matched his career high against BC and it also marked his 13th game this season and 27th time in his career that he has exceeded 20 or more points.

Young is leading the ACC in scoring at 20.8 ppg and he is the ACC career leader in scoring with 1,687 points. Young is 10th on Pitt’s all-time scoring list. He has recently been added as a watch list finalist for the Karl Malone Power Forward of the Year Award.

You can check out Young in person at the ACC Tournament held March 7-11 at the Barclay’s Center. Hopefully, Young will have an opportunity to conclude his career in the postseason; at 13-11 and a rugged seven games remaining in the regular season the Panthers are looking at the NIT.

I had the privilege to spend a few moments with Dick Groat before the start of Pitt/BC game. Groat is one of the all-time two-sport stars as he played baseball and basketball.

While playing basketball at Duke University Groat was a consensus All American and named the National Player of the Year (1952). After graduation he later moved up to the pro ranks where he enjoyed a short career playing for the Fort Wayne Pistons in the early NBA.

But Groat (Wilkinsburg, PA native), is best known for his play on the baseball diamond where he won two World Series (1960, 1964), while playing shortstop for the Pittsburgh Pirates, along with a NL batting and MVP title (1960). Perhaps most local readers will recall Game 7 of the 1960 World Series between the Yankees and Pirates when Bill Mazeroski’s dramatic walk-off home run brought the Series to Pittsburg.

Groat, a beloved legend in the Steel City, has been a color analyst on Pitt broadcasts for 38 years. At 86 years young and looking fit and trim, Groat still looks like he could lace ‘em up with the best of them!

The game of the week should be between Harvard and Yale, on Feb. 11 (7 p.m. ESPN3). Harvard’s dynamic freshman point guard Bryce Aikens (Randolph, NJ) leads the Crimson in scoring (13.3 ppg).

The Ivy League will host its first postseason basketball tournament on Saturday and Sunday March 11-12 at the Palestra in Philadelphia, Pa. The Palestra, “The Cathedral of College Basketball,” celebrated its 90th year when Penn hosted Princeton on Feb. 7. The Palestra has been home to more college basketball games than any other venue in the country

The top four teams in the regular season standings will earn berths in the tournament and play for a berth in the NCAA tournament. The ESPN family of networks will broadcast all the games.

This has been rivalry week and I really enjoyed watching Duke and Carolina and Oregon and UCLA get after each other.

All four have the talent and coaching to make it to the Final Four. I also like Villanova, Kansas, Louisville and Virginia.

I am not so hot on John Calipari’s Kentucky Wildcats and ‘Nova is toast if Josh Hart gets in foul trouble or is sidelined with an injury.

Other teams that could pose a threat in the tournament include Northwestern, Maryland, Arizona, Florida State and Miami.

Of course, you have a Princeton, Yale or Harvard as a likely No. 16 seed with a legitimate shot to be the first to knock off that No. 1 seed.

It would be a nice story if Justin Robinson and Monmouth give us some March Madness moments.

It’s still early as the results of the conference tournaments will give me a better gauge on who is trending in the right direction.

Here is a list of March Madness Tournament dates:

In addition the Patriot League, America East and Northeast -10 will conduct championships at on campus locations (highest seed hosting).

I’ll have all the inside scoop on who is hot starting with next week’s column….

Notre Dame’s Matt Farrell has the ACC’s Most Improved Per Game Scoring this year versus last. The Bridgewater, NJ native who played at Point Pleasant Beach HS is currently scoring at a 14.1 ppg clip, which is 11.5 points over last season.

Farrell is also third in the conference in assists per game (5.44).

I’ll get an in person look at Farrell and Vasturia when the Irish (18-7) invade Conte Forum to face Jim Christian’s Boston College Eagles on Feb. 14.

Hat’s off to Tom Brady and the Patriots for a dramatic Super Bowl win! Brady’s and Belichick’s fifth win is truly historic for a player/coach combo, however, Charles Haley is the first to claim five Super Bowl rings.

It was another black mark for Baylor University, when newly-hired coach Matt Ruhle was forced to terminate his strength coach for soliciting a prostitute. Kudos to Ruhle for taking swift action … perhaps more coaches and institutions will follow suit!!!