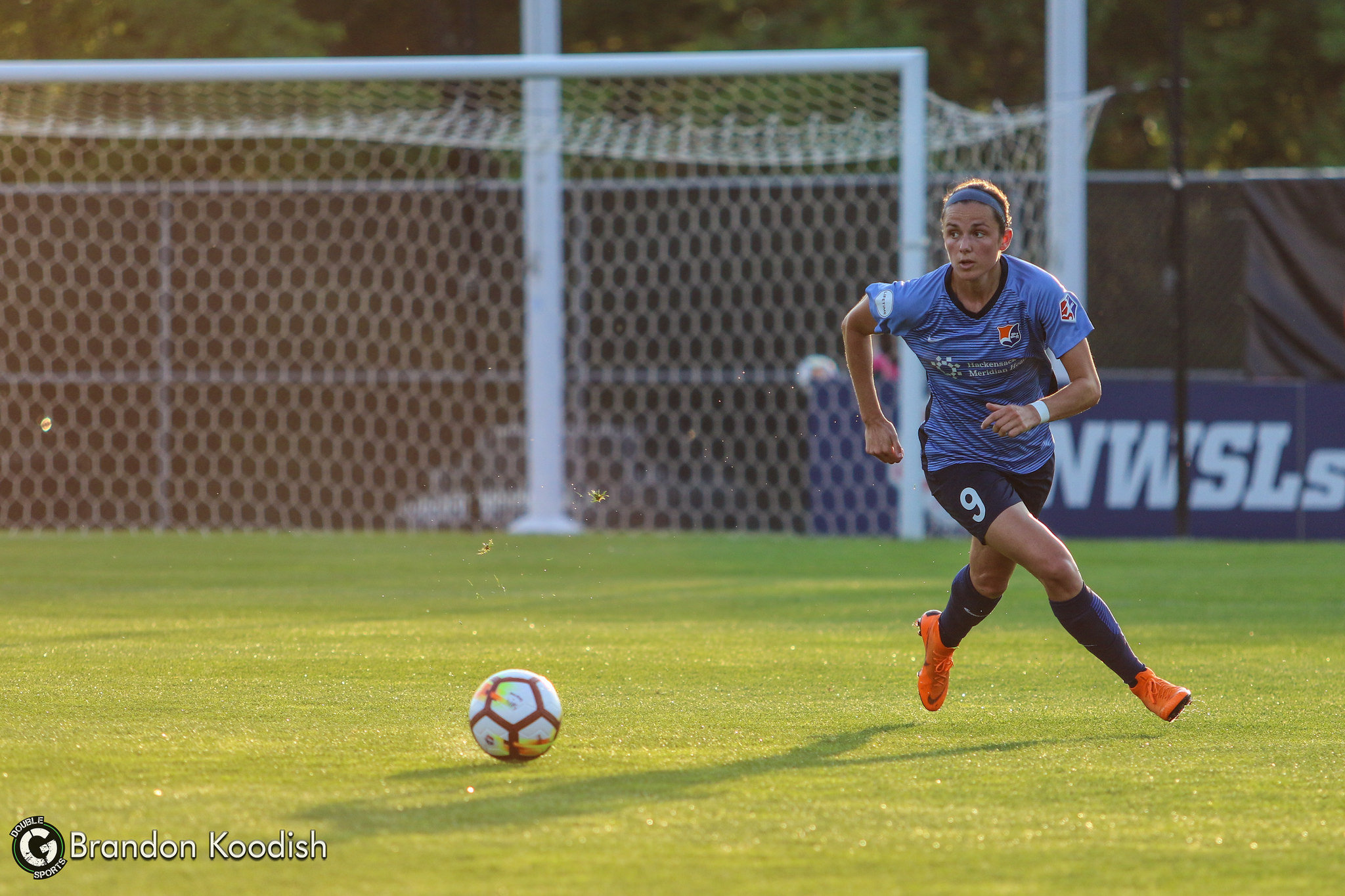 Piscataway, NJ (May 26, 2018) – Sky Blue’s hopes to earn the first win of the season were crushed by Seattle Reign on Saturday night at Yurcak field in front of 2,814 fans. The match marked the third time both teams met this season, and the second time Sky Blue hosted Seattle. Megan Rapinoe has scored the winning goal for Seattle Reign on all three games.

Sky Blue FC’s start of the match has been one of the best yet for the NJ team. In fact, all of Sky Blue players seemed to have been having fun on the field. They were as good on the defensive end as they were attacking.

At the 9’ Amanda Frisbie sends a through ball to Carli Lloyd. Lloyd’s shot is deflected by Seattle’s goalkeeper Lydia Williams; and Lloyd was unable to connect the rebound with Katie Johnson right in front of the net. Great opportunity for Sky Blue, and things were looking good.

Seattle’s response comes quickly at the 10’. Jodie Taylor on the left sends a cross to Sky Blue’s box for Elizabeth Addo. Addo is not able to connect but it is Jess Fishlock who shoots and her shot luckily ends in Kailen Sheridan’s hands.

At the 33’ from the right side, Sarah Killion sends a cross to the far post. Janine Beckie connects, but it’s unable to convert. The game will go to halftime scoreless and looking good for Sky Blue.

The Seattle Reign dominated the second half. It was Rapinoe at the 65’ who would convert the lone goal for a 1-0 in favor of the visiting team. The play started on the left side with Christen Westphal who dribbled past Christina Gibbons and Shea Groom to serve Rapinoe in the box, who is able to convert with a one-touch into the net.

Seattle continues to attack with dangerous opportunities in the 70’ and 80’ by Megan Rapinoe. The latter was a play from a shot that Sheridan is not able to grab. The ball is loose in front of the net and saved by Rebekah Stott from becoming a second goal by the Reign.

Sky Blue is unable to create any concrete opportunities during the second half and the game would end with a 1-0 for Seattle.

Although it was a great first half for Sky Blue, the defense lost some focus during the second half, which resulted in Rapinoe’s goal. A quick and great response by Stott on the 80’ was key on keeping the score to just one.

The midfielders and forwards still lack communication and cohesion. When they connect passes and run to make plays, we can see the change on game flow and momentum in favor of Sky Blue. However, when they don’t go back to help on the defensive end, they leave a compromise defense and the game turns sloppy.

Sky Blue FC hosts the Utah Royals FC, a new NWSL franchise on Saturday, June 2 at 7:00pm ET. This match will mark Sky Blue’s Kickoff to Pride Month Celebration and will be live-streamed on go90.

Women’s Rugby: Coming to a Pitch Near You
Memorial Day for Men’s National Team