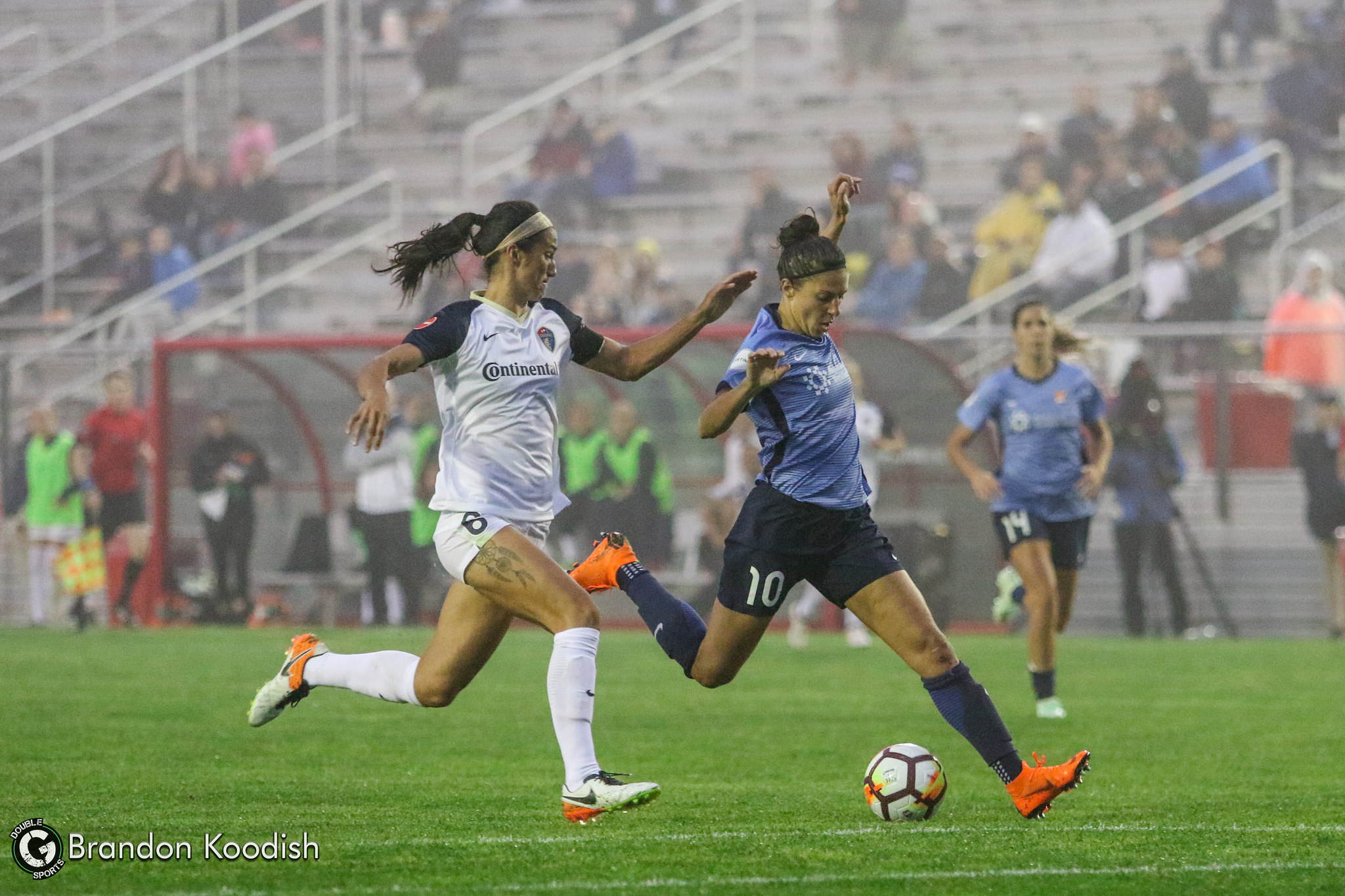 Piscataway, NJ (May 19, 2018) – It has been a tough start of the season for Sky Blue FC (0-5-1). This time, it was top-ranked North Carolina Courage (7-0-2) defeating the NJ team 2-1 in front of a crowd of over 1,900 fans that saw rainy and foggy weather. This was the second time both teams met this season, with the NC Courage defeating Sky Blue in both occasions.

Sky Blue’s early attack provided some opportunities for the team. However, NC Courage reacts and Debihna finds Jessica McDonald on the right side after recovering a ball in the midfield. In the counter-attack, it is McDonald who crosses the ball to the box. Crystal Dunn finds it to put the NC Courage up 1-0 at the 16’.

After quick passes near the box at the 27’, Dunn finds Debihna, who taps the ball from the left side. Kailen Sheridan is unable to grab the ball. In a miscommunication with Amanda Frisbie, Sam Mewis kicks the ball into the net and gives the 2-0 advantage to North Carolina over Sky Blue.

North Carolina dominated the first half with 62% possession and 7 shots on goal, while Sky Blue only had 1 shot on goal. The game will go to halftime with a 2-0 score.

We have seen Sky Blue reorganize itself and come back better during second halves. This time, however, it did not seemed to be the case. The NC Courage attack kept midfielders and defenders set back. Every time Sky Blue was able to clear the ball and try to move forward, NC Courage would recover and attack.

Sky Blue will see a penalty kick opportunity at the 72’. Carli Lloyd’s penalty kick was denied by Katelyn Rowland and Raquel Rodriguez’ strike after recovering the rebound was also denied by Rowland. Save of the week right there.

The Sky Blue FC lone goal will come during stoppage time at the 94’, after a free kick set play. Rodriguez short pass to Sarah Killion to lay the ball for Lloyd, who takes an incredible shot, ends in Rowland’s net for a 2-1 score. Golazo! Definitely goal of the week.

The referee would not allow any more stoppage time after Lloyd’s goal, and the game ends 2-1 in favor of the visiting North Carolina team, who continues undefeated this season.

Sky Blue FC will travel to Maryland for a Wednesday 7:30pm ET kickoff against the Washington Spirit. Returning home to Yurcak Field in Piscataway, NJ on Saturday, May 26. Kickoff is set for 7:00pm ET. Both matches will be live-streamed on go90.

IMAGES: NYCFC vs Colorado Rapids – May 19, 2018
David Villa victorious on his day