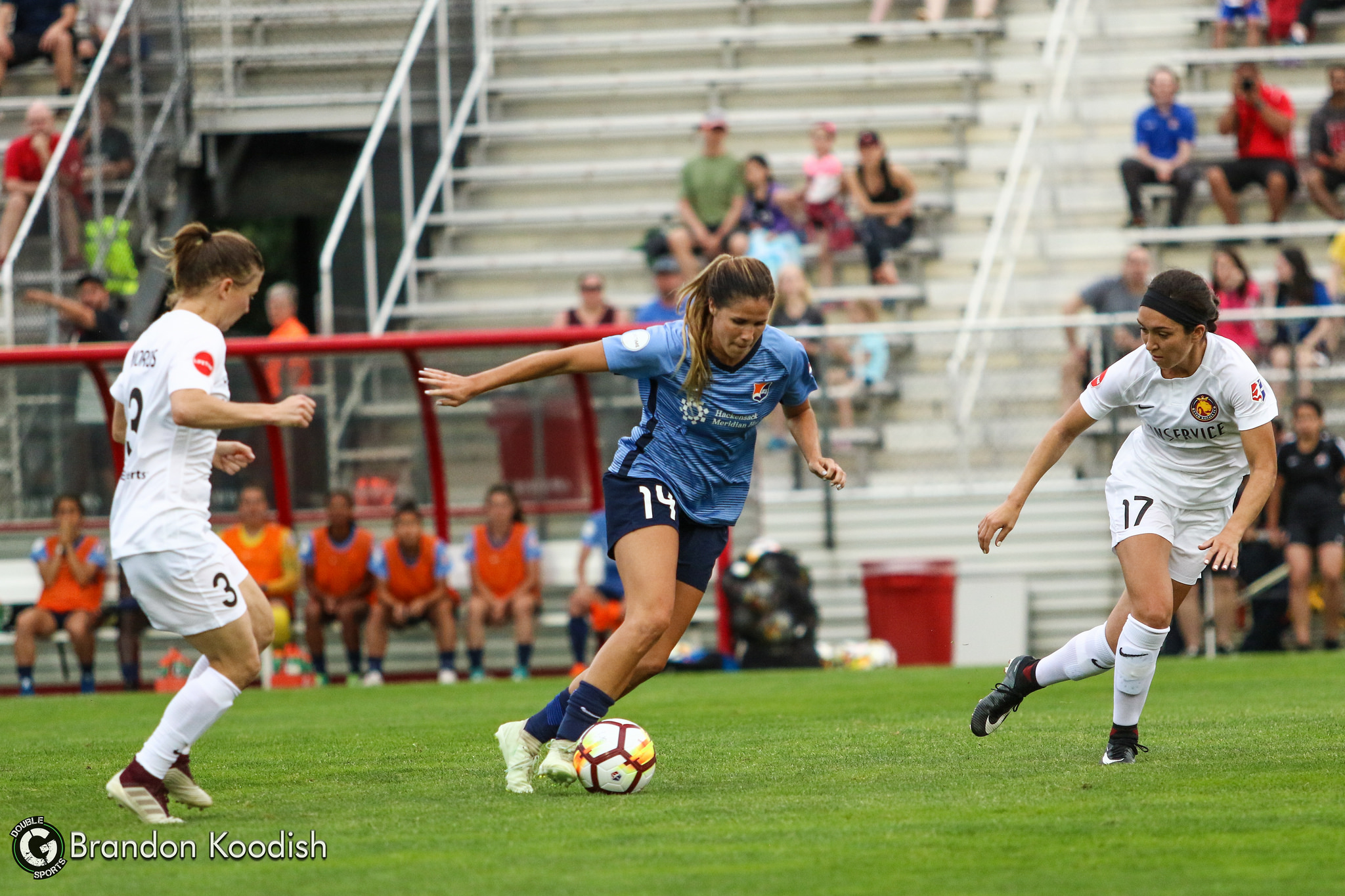 Piscataway, NJ (June 2, 2018) – Saturday night was a historic night as Sky Blue FC played the newer NWSL franchise addition Utah Royals, FC at Yurcak Field in Piscataway, NJ. The match marked the first time ever both teams met, as well as the first time for Utah visiting New Jersey. The 2,229 fans in attendance enjoyed a perfect night for soccer, in combination with a colorful sunset.

Both teams were coming from losing during NWSL week 9. While Utah Royals was fighting to get back on the win column, Sky Blue was looking, yet again, for their first win of the season.

The first half was a back-and-forth game for both teams. Utah Royals quickly puts the score up against Sky Blue 1-0 at the 3rd minute. The play started with Taylor Lytle and Gunnhildur Jonsdottir in the midfield. Jonsdottir drives all the way down the left wing, crosses to the box, and finds Diana Matheson who sneaks behind Sky Blue’s defender, Amanda Frisbie, and is able to connect on a one-touch slide goal for Utah.

It only takes Sky Blue a few minutes to recover. On the 10th minute, Amanda Frisbie serves the ball to Katie Johnson on the left side. Johnson crosses the ball to the near post in the box to find Shea Groom. Groom fired a one-touch kick to equalize the match. It is a tie 1-1 at halftime.

Sky Blue will see a better second half. Unfortunately, a late own goal (Mandy Freeman) off a cross by Utah Royal’s Katie Stengel at the 85th minute, will leave the NJ team still winless and with no points earned yet at home this season.

Defensive mistakes are costing Sky Blue FC most of their goals against. We have seen it throughout the season, and also during this match.

On the first goal, Gibbons’ bad touch just handed the ball to Utah’s midfielder Jonsdottir, and on the cross, Matheson is able to run behind Amanda Frisbie, to put the ball in the net. On the second goal, which is an own goal, Mandy Freeman could not get a good look of Sky Blue’s goal and kicks it right in Sky Blue’s own net, leaving Kailen Sheridan unable to even attempt to stop the kick.

Even in the absence of Carli Lloyd and Savannah McCaskill, both on national team duty, we were able to see the potential that midfielders and forwards have. When Sky Blue plays quick touches and brings the ball up, they are capable of scoring. Groom’s goal is clear evidence of that.

You can check out the photo gallery for this match here.

Sky Blue FC hosts the Washington Spirit on Friday, June 8 for a 7:00pm ET kickoff. If you are planning to attend, Fan Friday will be the theme for the match, as part of Sky Blue’s Theme Nights Series.

On the other hand, if you are not going to be at Yurcak Field, the match will be live-streamed on go90.