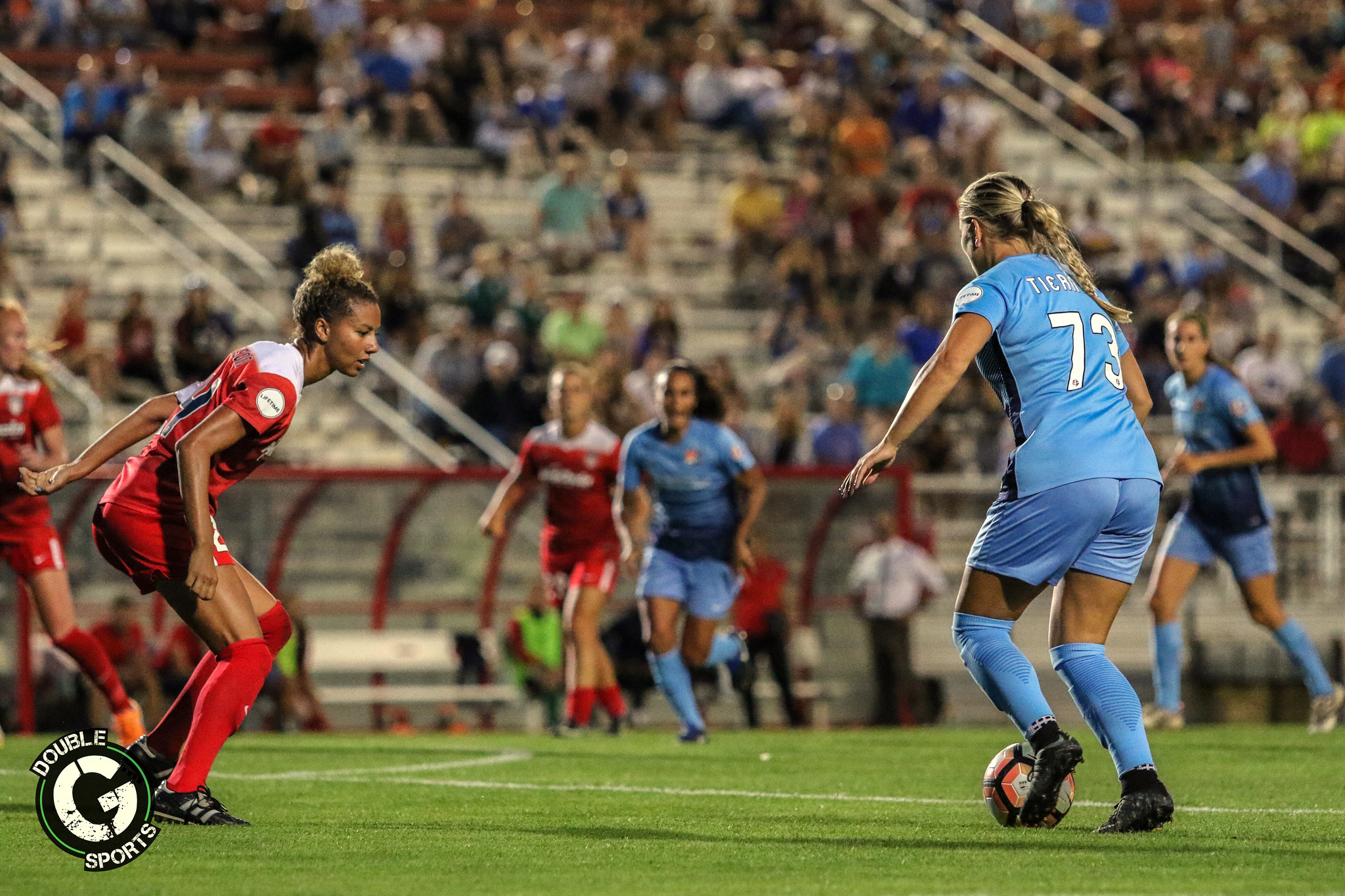 Boyds, MD (May 23, 2018) – The losing streak continues for Sky Blue (0-6-1, 1 pt) as they are unable to take any points home, and lose 1-0 against the Washington Spirit (2-5-2, 8 pts) at their home field in Boyds, MD. Both teams were coming into this match desperately needing a win, and the Spirit was the one executing on the attack to take the three points.

During the early minutes of the game, both teams were evenly trying to create opportunities. The first dangerous play for the Washington Spirit comes at the 11’ when Sky Blue’s defense gives the ball away, Taylor Smith is able to get to the back line on the right and crosses the ball to the box, where Francisca Ordega is able to get her foot and the ball hits the far post. After this action, the Spirit started putting more pressure on the Sky Blue defense.

Another defense mistake, and another play for the Sky Blue opponent. Only three minutes later, at the 14’, Mallory Pugh is able to steal the ball from Amanda Frisbie and it is Ashley Hatch who finds the space and takes the shot to Kailen Sheridan’s hands.

Sky Blue sees a good opportunity at the 18’ when Raquel Rodriguez finds Janine Beckie down the left side, who then centers the ball on a low pass to Carli Lloyd but Lloyd kicks the ball too low and it goes high of Aubrey Bledsoe’s goal. Beckie has another opportunity at the 27’ with a powerful shot that Bledsoe is able to deflect.

At the 36’, Rodriguez finds Beckie on the left side who takes a run towards the goal, gets a look and fires another beautiful shot, but Bledsoe continues to deny Beckie over and over again.

With the teams creating opportunities on both sides of the field, the game is scoreless at the halftime.

On the second half, at the 51’ the duo Ordega-Hatch is able to break the defense and Hatch finds the ball, shoots it and it goes just a few inches away from Sheridan’s left post.

The lone goal for Washington Spirit would come at the 64’ after a free kick by Andi Sullivan finds Hatch. Amazing execution and the header finds the back of Sheridan’s net. The Spirit is up 1-0.

At the 70’, Lloyd gives it a “shot” from far away, but the ball misses the net and she could not capitalize on the play.

The last equalizing opportunity for Sky Blue will come at the 87’ after Savannah McCaskill’s free kick finds Lloyd’s head, but the header is easily caught by Bledsoe.

Game over and Sky Blue is unable to get the win, losing 1-0 to the Washington Spirit.

Sky Blue creates good opportunities with great set plays, however, the lack of capitalization of those opportunities on the last touch is hurting the team. They have yet to see a win on their score sheet during this 2018 season. Their only point comes from a tie against the Chicago Red Stars during NWSL week 4.

Defense mistakes on not recovering the second balls or too many touches have cost Sky Blue some of the goals against the NJ team. Though we can see there is some decent communication between the defense and the midfield, we have yet to see coordination between the midfield and the attacking players. There is an urgent need to find rhythm and cohesion.

Sky Blue FC will host Seattle Reign FC for a Saturday 7:00pm ET kickoff at Yurcak Field in Piscataway, NJ. This will mark the second time Sky Blue hosts Seattle at home in Yurcak Field, and the third time overall both teams have met this season.

The match will be live-streamed on go90.