Piscataway, NJ (April 15, 2018) – On a cold and rainy day, Sky Blue FC fell 0-1 to Seattle Reign, during their NWSL 2018 season home opener. Despite the harsh weather conditions, over 1,900 fans attended the game at Yurcak field.

The visiting @ReignFC earned the road victory on Sunday night over @SkyBlueFC thanks to @mPinoe converting at the pk spot in the 6th minute. #NJvSEA #NWSL Week 3 highlights for you 👇 pic.twitter.com/bhIK0ExriF

Yesterday’s home opener was special. You could feel the excitement of the majority in attendance to see their very own Carli Lloyd’s home debut. Even if that meant, staying the entire game and battling the extreme cold, high winds and rainy conditions.

Lloyd had a special recognition in honor of her 100th international career goals, previous to kickoff. During the recognition ceremony, New Jersey governor Phil Murphy, along with Sky Blue’s President and General Manager Tony Novo, presented Lloyd with a #100 jersey. 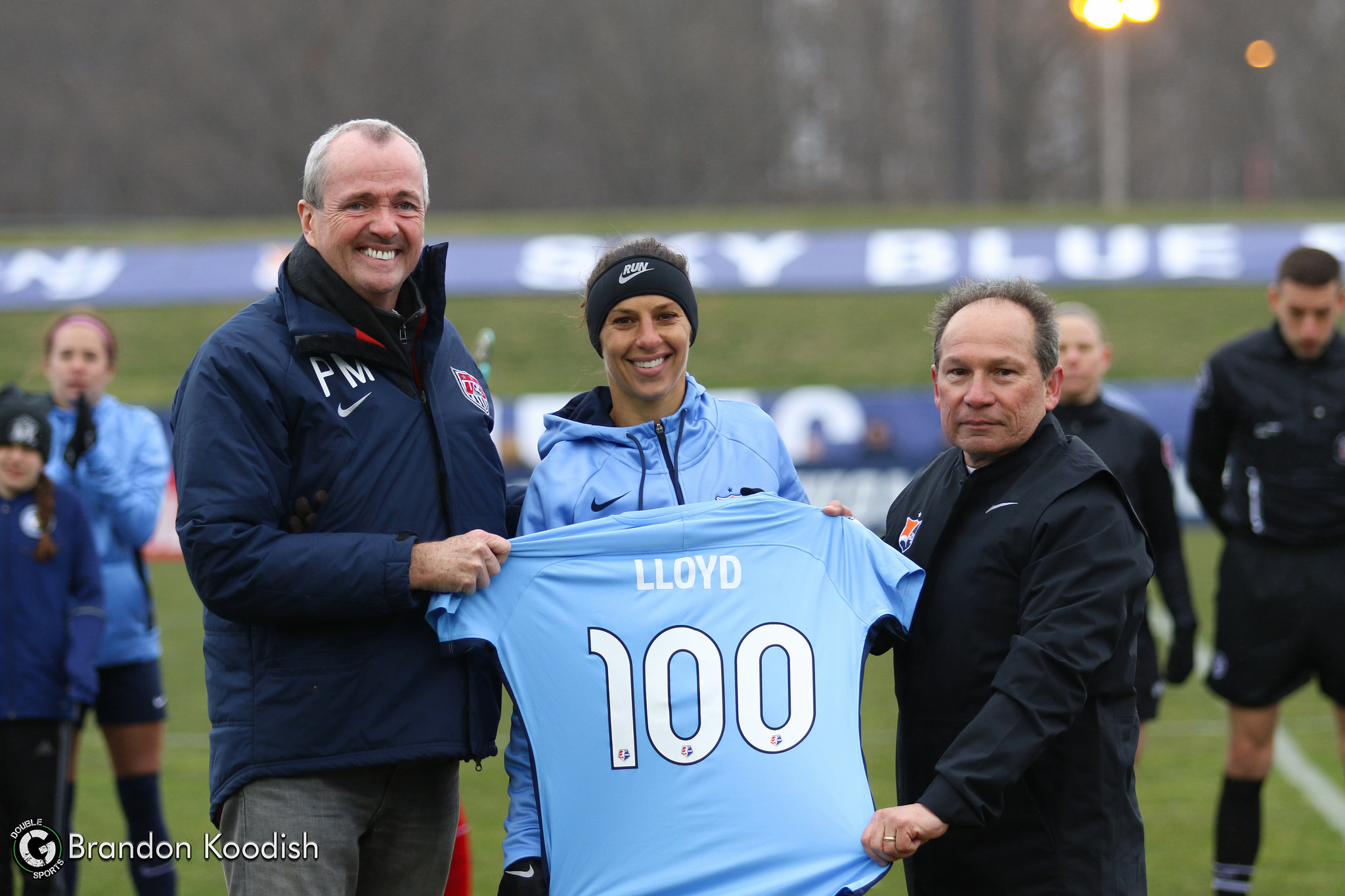 Erica Skroski’s handball in the box area gave an early penalty kick in favor of the visiting Seattle team. Megan Rapinoe was able to convert and at the 6’ she put the Reign ahead on the scoreboard.

Sky Blue’s slightly higher possession percentage during the first half, 51% vs 49%, did not help in the conversion of any opportunities to score. Raquel Rodriguez was the only player with a shot on goal. Seattle, on the other hand, took advantage of the situation. By holding Sky Blue’s team back, they dominated the first half.

Previous to the beginning of the second half, Rodriguez and Killion were seen getting some advice by their team captain, Carli Lloyd. “Anything that I can do to help the team and make players better, that’s what it’s all about. I was just telling them that the three of us, we need to connect more and dictate that tempo. It’s a good relationship.”, Lloyd said after the game.

Sky Blue’s stronger performance during the second half handed them some good opportunities but they just could not finish. Seattle pressure forced a second penalty at the 86′; and it was time to shine for Kailen Sheridan. The Sky Blue goalkeeper was not only able to deny the penalty kick, but she also denied the loose ball from making it to the net. It was a close call for the Reign.


Freezing cold with heavy rain, sleet and 60 mph winds… 🌬@Kailen_Sheridan, cooler than the other side of the pillow. 😎 #SheridanSOW pic.twitter.com/xh9k5roL5a

Sheridan’s saves were not enough. Sky Blue could not get the equalizer and falls to Seattle 1-0. Sky Blue’s head coach Denise Reddy, was happy with the style of play of the team, but there is still work to do. “It is a work in progress. We are going to train more clinical in the final third. Of course you want to win, you want to take points. The style of play, how we play against the good teams, a good Seattle team; I am happy with that.”

The halftime parades are Sky Blue FC’s one-of-a-kind events for the attendees at Yurcak field. If you have been to a home game, you know what I am talking about. If not, this is your spoiler alert. Young boys and girls from all age groups get to walk on the field in front of the crowd.

During yesterday’s parade, members of the NJ Youth Soccer Fall state cup champions and runners-up, were honored. Among the teams were GPS Central Red 12U Girls and the NJ Rush 11U Girls. State champions in the Presidents’ Cup and National Championship Series have the opportunity to represent New Jersey at regional competition and, if successful regionally, they can then go on to compete for a national title.

“The opportunity to honor our State Cups champions at halftime was just one of many ways in which the club [Sky Blue] demonstrates its commitment to youth soccer”, said Evan Dabby, NJ Youth Soccer’s Executive Director. “Even the horrendous weather conditions weren’t enough to prevent the girls in attendance from having a great time on the field getting recognized for their awesome achievements”, he added.

On Saturday, April 21, Sky Blue visits Chicago Red Stars for a 8:00pm ET kickoff. They return home on May 5 to host the Houston Dash for a 7:00pm ET kickoff. Both games will be live streamed on go90.