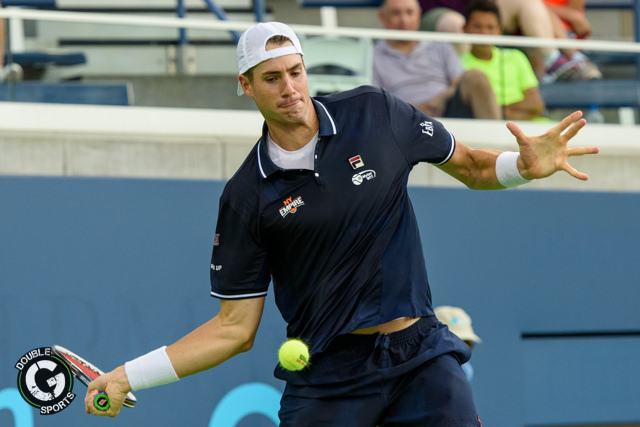 It was an unsuccessful return home for the Empire returned who played their last four games on the road. The Empire lost to the Orange Country Breakers 22- 16. They were hoping to continue to be in the hunt for the WTT finals by getting an important win at home. Coach Gigi Fernandez said before the match that it was feel nice to “have the crowd root for the them.”

That they did, especially for former Wimbledon finalist Eugenie Bouchard who was making her debut for the Empire on Thursday. Genie spoke of her love for WTT but that she “feeling a bit of pressure from Gigi”, it being her first time playing on WTT circuit this season.

Though Genie said she was feeling the pressure, she certainly didn’t show it as she was able to win the women’s singles event against Yanina Wickmayer. Throughout the set, Genie faced many break points but proving she could withstand the pressure she was never broken. She won the set 5-2. This was crucial considering Mardy Fish of the Empire lost his set 3-6, to Gabashvili.

Genie, however was unable to carry her singles momentum into the women’s doubles, where she and Kristen Flipkens were dominated by the Breakers and lost the set 0-5. Despite the men’s doubles being more competitive Empire lost that event as well, in a tiebreaker.

The mixed doubles, which did not include Genie, had many momentum shifts with Neal and Kristen trying their best to force extended play. At 4-3 Empire had the chance to win the set but the Breakers were too strong, as they held then dominated the tiebreaker.

Despite the loss, the Empire are still in the hunt to make the WTT Finals on August 5.