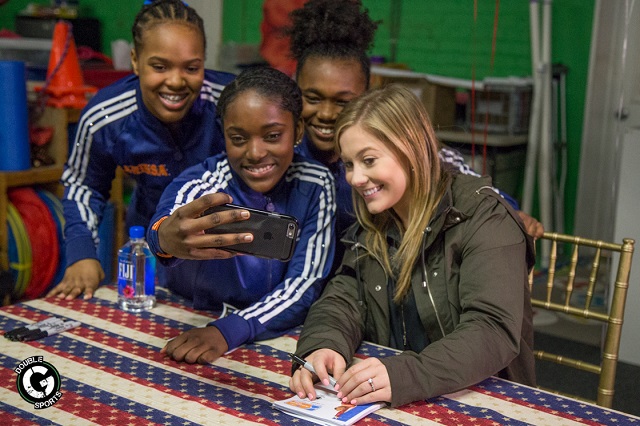 It was no ordinary day at the gym for Athletic Arts Academy in Orange, New Jersey. As part of the normal after school routine, the girls started to arrive at the gym. Little did they know, they had an “Olympic” size surprise waiting for them. As the group gathered on the mat, Coach Iya Sokoya Karade told the athletes and the parents in attendance that today was about to become one of the academy’s finest days. To the delight of all in attendance, Coach Iya proceeded to introduce 2008 gold medalist Shawn Johnson.

Shawn discussed the importance of gymnastics and how she felt it was truly one of the greatest sports. For the young athletes in attendance it was also an outlet for them outside of home and school. It was a place to help learn the importance of discipline, routine, and patience. Coach Iya added that understanding that an Olympic champion once started in the very same way that they are would hopefully “plant that seed” in knowing that anything is possible.

It was now time for a Q&A session…“Do you view your competitors as your friends or as rivals”. Shawn explained that, early on in her training, coaches told her that you are competing against yourself and not anyone else on the floor and your goal was to strive for your personal bests.

The girls continued with their questions for Shawn. Have you ever fallen off the beam? Did you ever miss practice? Do you have a lot of trophies? All of those questions drew a smile from Shawn as she answered each and every one asked of her.

Shawn also was there to remind the girls that this is an Olympic year and the road to Rio for USA Gymnastics starts next week in Newark. For the first time, the Prudential Center will host the Nastia Liukin Cup on March 4 and the 2016 AT&T American Cup on March 5. Gabrielle Douglas and Donnell Whittenburg are just two of the high profile stars scheduled to compete.

The future of gymnastics is in good shape when it’s past stars continue to be a part in helping shape its future.

For more information at next weeks event at the Prudential Center please visit. www.prucenter.com/events. For information about the Athletic Arts Academy visit www.athletic-arts-academy.org

Should Athletes Be On And Use Social Media
Lundqvist Sets Records In Rangers Win Over St. Louis
Posting....