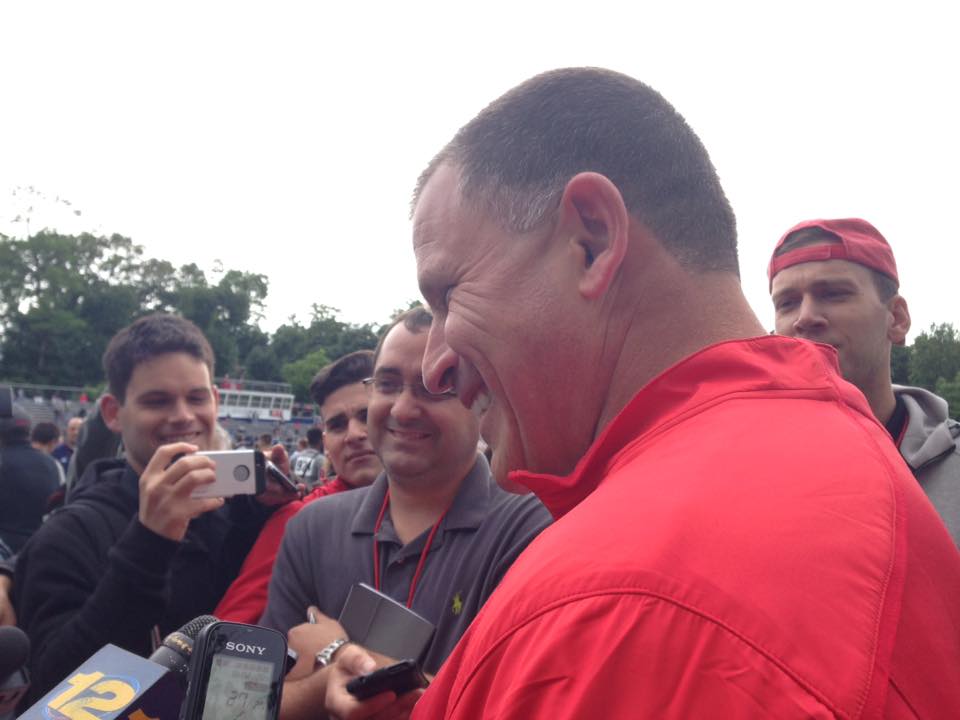 Greg Schiano wasn’t expected to speak publicly to the media Wednesday at the Rutgers football Tri-State Showcase in North Jersey, but Double G Sports and others were treated to a nice surprise. 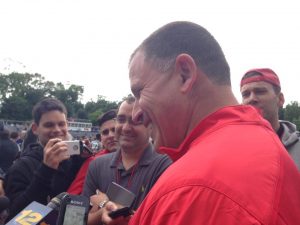 In his first public appearance back in New Jersey, the former Rutgers/Tampa Bay Bucs head coach and current Ohio State defensive coordinator/associate head coach talked what it was like being back, memories, recruiting, current Scarlet Knights head coach Chris Ash, and more.

Ash praised Schiano for reviving the program from 2001-11 from a doormat to a perennial bowl team. Now one of Rutgers’ biggest rivals in the Big Ten Conference, the former Scarlet Knights coach downplayed being back in Jersey, but smiled and laughed when talking to media, friends, and former teammates during his time at Rutgers.

“It’s kind of coaching,” Schiano said. “You just keep going. You don’t think about that stuff. It’s neat to be here though. It’s neat to see some old friends, some good people.”

After taking over one of the worst college teams in the country, Schiano went 3-20 in his first two seasons (0-14 in Big East Conference play), but chopped his way to a 68-67 record at Rutgers with the most successful season coming in 2006, when the team when 11-2 with a Texas Bowl victory, and a No. 12 ranking to finish out the year.

“…Eleven years of my life poured into that, so I think there will always be a place here for Rutgers,” said Schiano, pounding his chest. “But when you’re a coach, whatever that emblem is on your jacket, you better work hard or you’re not going to have it long. So, I get it. It’ll be fun to compete with Rutgers because Rutgers is a really strong program and Chris is going to do a great job there.”

When asked about Ash, Schiano said they met when Ash was hired by Meyer at Ohio State, saying they “bounced ideas off each other” and highlighted his attention to detail and organization, something Schiano had a reputation of as well.

“Rutgers football wouldn’t be where it’s at today without the blood, sweat and investment that Coach Schiano put into it,” Ash said. “It wouldn’t be right to have him here and not at least recognize him because I wouldn’t be standing here today if it wasn’t for all the work that he put in.”

Schiano knows the importance of keeping in-state kids at home and having them come to Rutgers. He also knows how tough of a task that is.

“I think it’s always been a battle state,” Schiano said. “We fought like crazy not to make it that, but it’s a challenge, for sure. New Jersey has always been a talent-rich state. The nice thing is kids that have academics, too, that can be eligible and go play for you right away.” 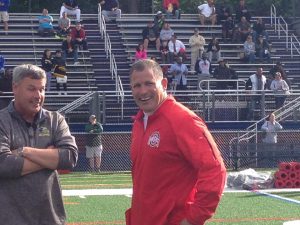 Greg Schiano all smiles at the Tri-State Showcase at FDU on Wednesday (Photo – Chris Nalwasky, DoubleGSports)

Michigan head coach Jim Harbaugh has taken a liking to the Garden State – particularly Paramus Catholic – where he held a satellite camp called the Next Level Football camp at the school a mere 30 miles away from Rutgers’ camp.

Harbaugh hosted about 650 high school prospects, while Ash compiled over 1,000. Harbaugh brought in staffs from Syracuse, Maryland and others while Ash corralled Temple and Ohio State.

“Urban came in and said, ‘What do you think?'” Schiano said. “And I said, “Let’s do it!’ It’s neat to be back here and we’re going to see a lot of good players and be around a lot of good people, so it’s exciting.”

And so far, Ash is pushing the right buttons, restoring the wounds ex-Rutgers head coach Kyle Flood created. The 2017 class features 11 commits, and nine are from New Jersey.