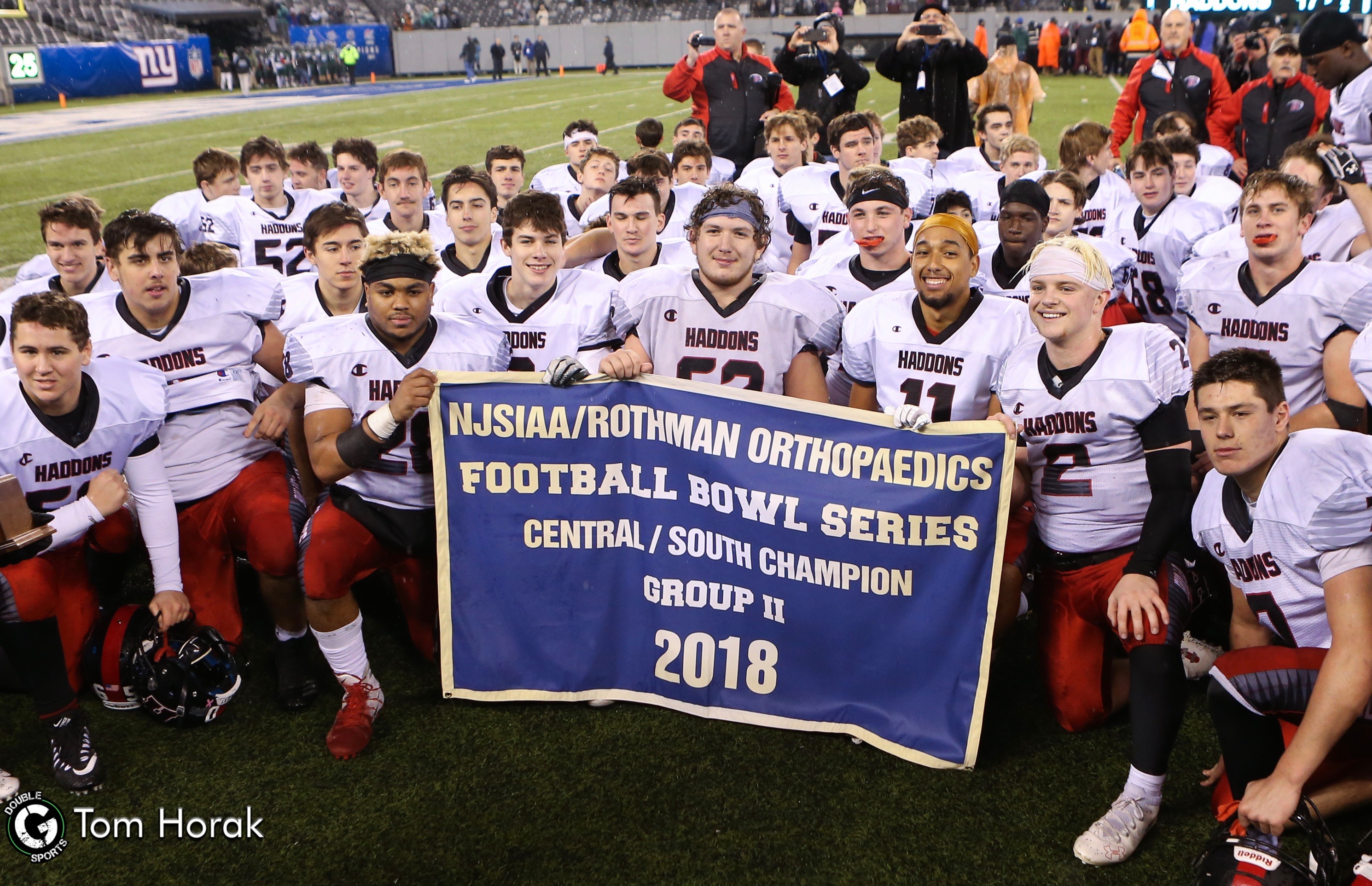 In a battle of two unbeaten teams in the South Group 2 Bowl Championship Game at Met Life on Saturday, Haddonfield and Hillside(11-1) certainly lived up to the billing with hard-hitting defense that refused to give an inch, plenty of dust ups after the whistle and penalties assessed on both sides.

However it was the Bulldogs that were able to strike quickly at the end of the second quarter that changed the complexion of the game. With 1:05 remaining, running back Gabe Klaus powered through the line for a six-yard touchdown. Forcing Hillside to punt, Haddonfield defensive back Davis Smith electrified the crowd on the punt return sprinting towards the left sidelines before cutting back toward the middle of the field and running untouched for the 53-yard score with five seconds left.

“An elite player there making a big time play on that punt return and changed the momentum of the game, said Haddonfield Head Coach Frank DeLano”

In the third quarter, Hillside appeared to have some momentum driving deep into Haddonfield territory but the Bulldogs defense buckled down and stopped Comets star running back Brian Ugwu(1,105 yards and 8 touchdowns) short of the first down marker. Despite having to punt the ball away, the Bulldogs defense stepped up to the plate again as senior defensive lineman James Kane picked off a pass thrown by quarterback Gavin Melendez.

“James Kane, a kid who never played the game of football four years ago, a big sack and pick, DeLano said. Our defense takes a lot of pride every week in the coaching staff down to the kids and played well all year and committed tonight on a bigger stage”

Despite a drive stalling out at the 18 of Hillside, kicker Henry Grozier drilled home a 35-yard field goal in a rain with 12 seconds remaining extending the advantage to 17-0. The Comets did not throw in the white towel, marching down field in eight plays, 69 yards capped of by 39-yard touchdown pass from Shadon Willis to Nahree Biggins in the fourth quarter.

Hillside’s defense came up with a big turnover jarring the ball loose out of running back Tommy Batson. Despite having the ball in Bulldogs territory, the Comets would fail to capitalize turning the ball over on downs. Hillside would have one last opportunity with less than six minutes remaining with Ugwu starting to gain traction on the ground setting up first and goal at the eight. Penalties cost the Comets in the end with an illegal block and intentional grounding assessed that pushed the ball back to the 40. Kane sealed the win and perfect 13-0 season sacking Melendez at the 40.

“We won the max the state presented to us , the guys have battled, proud of the way challenged every week and embraced it and enjoyed this journey, DeLano said. This is a special place and tomorrow our kids are going to be home watching Giants-Bears and saying wow I just played on that field yesterday”

“For 17 years you are building this, a lot of kids don’t get this moment and I hope all the 228 seniors are proud of this, whole town and community. It’s real hard to do what we just did and a body of work”