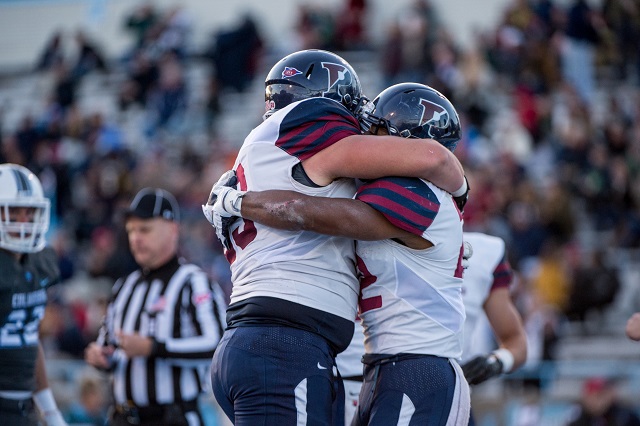 Either Penn or Harvard has had at least a share of the Ivy League football championship for the last eight seasons. It looks like this will be the ninth.

Penn football will trek to Cambridge, Mass., for a matchup with unbeaten No. 12 Harvard in what will likely be the deciding factor in the Ivy League title race. The Quakers (5-3, 4-1 Ivy) enter on a four-game winning streak, the second-longest active streak in the league behind the aforementioned Crimson (8-0, 5-0) squad that has come out victorious in its last 22 games.

As Penn and Harvard are the only two Ivy teams to currently control their own championship destinies, this matchup will have significant implications on who wins the Ancient Eight. A triumph for the Quakers would put them in position to clinch at least a share of the Ivy title next week at home versus Cornell, while a loss would eliminate the Red and Blue from title contention.

Coach Ray Priore, who has won 10 Ivy League championships since joining Penn’s staff in 1987, is not fazed by what’s on the line.

Senior linebacker Tyler Drake, who was a freshman on the 2012 Ivy champion Quakers’ squad, sees a similar football team to the one that beat then-No. 25 Harvard on the penultimate week of the season at Franklin Field and ultimately edged the Crimson by a single game in the conference standings.

Penn enters having won its last four contests — all Ivy matchups — by dominating the second half. In all four wins against Columbia, Yale, Brown and Princeton, the Quakers trailed at some point in the first quarter. However, they have more than made up for slow starts by outscoring those opponents by 75 points after the opening period. Drake credits the Red and Blue’s “mental toughness” to its ability to get better as games go along.

“I think it’s a testament to the coaches and players that have been able to make adjustments to the game plan during the game,” Drake said. “Nobody had panicked, nobody has worried. Everyone is poised and responds to adversity really well.”

The Penn offense has been humming under first-year coordinator John Reagan, with junior quarterback Alek Torgersen now up to 1,556 passing yards with a sterling 69.7 completion percentage and a 15:2 touchdown-to-interception ratio. His top receiver, sophomore Justin Watson, has 56 receptions for 800 yards and six touchdowns after scoring in each of the Red and Blue’s first four games, and the backfield tandem of junior Brian Schoenauer and sophomore Tre Solomon has combined for 925 rushing yards and 12 touchdowns. The unit will have a tough matchup with a Harvard defense that has allowed only 39 combined points in its last six games.

Last year, the Quakers, fired up for the final home game at Franklin Field for former coach Al Bagnoli, opened strong against the visiting Crimson — commanding a 24-17 lead after three quarters. However, the Red and Blue came undone in the fourth and allowed 17 unanswered points, sandwiched around two Penn three-and-outs. They were unable to come back, ultimately falling 34-24.

Through the air, Torgersen was 27 of 43 for 211 yards and a touchdown, and he was also the Quakers’ most effective rusher, with 55 yards gained and a score. 20 of Torgersen’s completions and 156 of his passing yards went to the trio of Watson and then-seniors Spencer Kulcsar and Conner Scott. Then-senior linebacker Dan Davis made a game-high 12 tackles and forced a fumble, and current seniors Ian Dobbins and Jack Madden both picked off Crimson quarterback Scott Hosch.

On the other side, Harvard running back Paul Stanton, Jr., bulldozed through the Penn defense for 235 yards and three touchdowns on 22 carries. Most of that damage was done in the first half, where Stanton accrued 173 of his yards in part thanks to touchdown runs of 42 and 75 yards, respectively. Hosch finished the day 13 of 20 for 174 passing yards, including a touchdown pass to Tyler Hamblin.

Harvard has retained its best player in Stanton, who has run for 735 yards on 134 attempts (5.5 per-rush average) with nine rushing touchdowns through eight games. In the passing game, Hosch has shown improvement from last season and claims 2,261 passing yards, an Ivy-best 16 touchdowns against only four interceptions as well as an league-leading 8.9 yards per attempt. Priore said Harvard’s efficiency through the air and on the ground prevents Penn from overplaying one aspect of the Crimson offense.

Penn’s record in the series against Harvard is 35-48-2. A 36th win would clinch Penn a winning record in Priore’s first season as head coach.

Rutgers Hoops Looking For Positive Results As Jordan Continues to Build Program
Yale Looking to Win Ivy, Get Back to NCAA Tournament