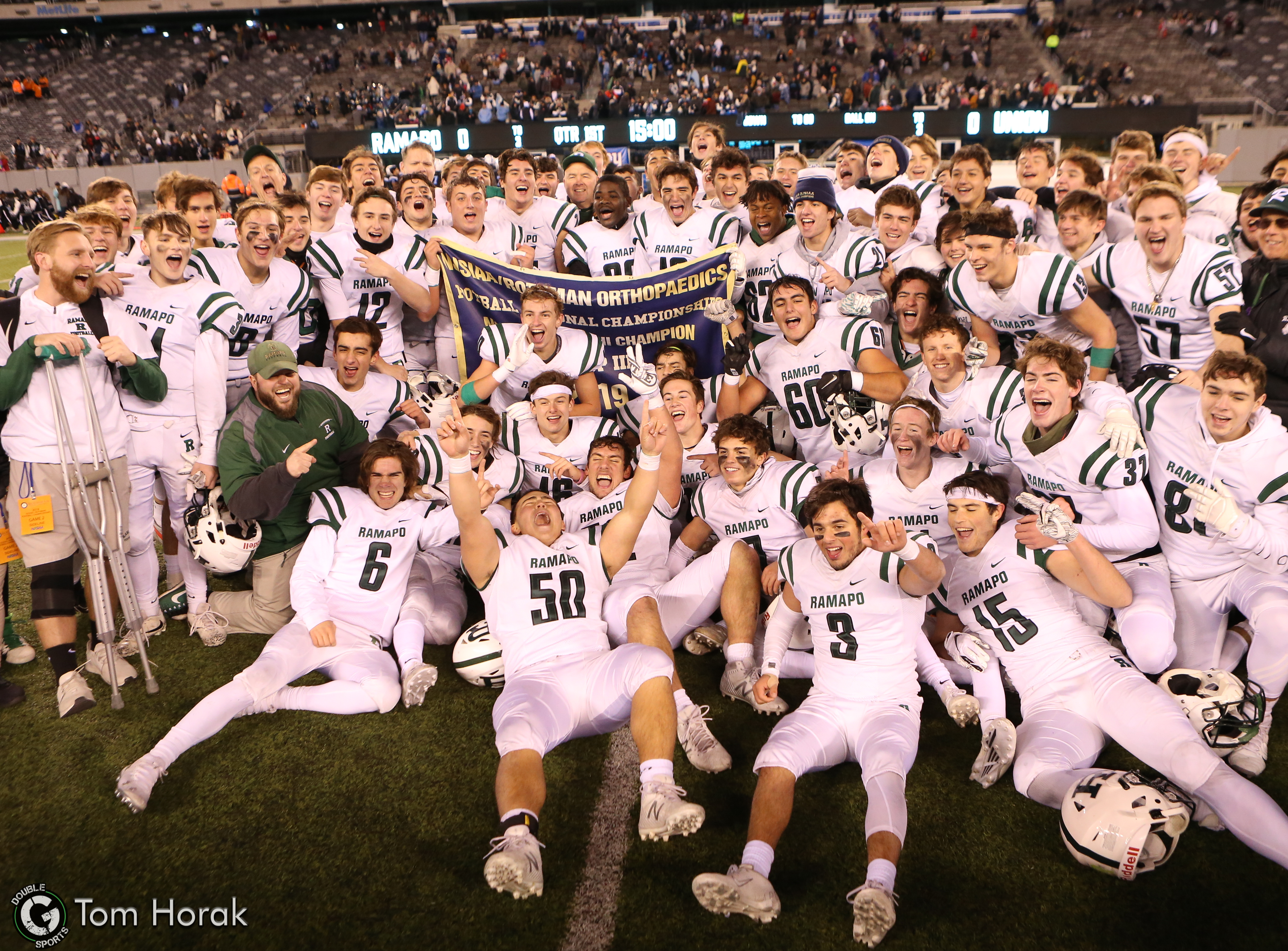 Billed as a must-see match-up between Piotr Partyla of Lyndhurst and Frank Riggio, who combined for 4,000 rushing yards and 67 touchdowns. Both teams came into the North 2 Regional Championship undefeated at 11-0. Last year the Golden Bears eliminated the Hillbillies from last season’s sectional semifinals.

This time around, it would be Riggio that set the tone totaling 115 yards in the first half while scoring three touchdowns as Verona built a commanding first half. In the third quarter, he added two additional scores. Riggio finished the game with five touchdowns, four rushing, and 155 rushing yards.

Defensively, the Hillbillies dominated the contest holding Partyla to 24 yards rushing while recovering three fumbles and intercepting two passes. Lyndhurst did not cross midfield until 5:40 left in the game and did pick up their first first down of the game came with 4:42 remaining in the third quarter. Verona tied the 2015 team for the most wins in school history with 12.

Frank Riggio on the win: “We came focused, prepared and totally dominated. We had to have a fast start because they have a very good team and we had a good pace and tempo. We knew that in the second half, we had to keep doing it and going back to what we did. If it was not for the guys blocking me, I would not be doing that. This is the best feeling ever and couldn’t be happier.”

A 25-game winning streak with a win and the opportunity for back-to-back undefeated seasons were on the line for the Ramapo Raiders in the North Group 3 Regional Championship Game against Parsippany Hills. Ramapo jumped out to a 17-7 halftime lead behind two of their best players in quarterback Charles DePrima ripping off a 79-yard touchdown run and running back Jake Tirone scoring a three-yard touchdown on the opening drive of the game.

Parsippany Hills quarterback JD Breslauer connected with wide receiver EJ Comerford (139 receiving yards) for a second 53-yard touchdown pass trimming the deficit to 17-14 early in the third quarter. The Raiders responded with a 13-play, 75-yard drive that chewed up over four minutes of the clock with Tirone capping it off with a four-yard score.

After the Ramapo defense forced a quick three and out, the offense went on another extended drive. Twelve plays, 79 yards, and over four minutes later, Tirone scored the final touchdown of his Raiders career on a four-yard run. Breslauer was not finished firing a 28-yard touchdown pass to wide receiver Dennis Wilson as the third quarter ended.

In the fourth quarter, the Vikings appeared to seize momentum after the defense forced a three and out. Starting at the 16-yard line, Breslauer marched the team down the field, connecting on several passes. Tirone ended that drive intercepting a pass with less than four minutes left. On the first Ramapo play, DePrima sealed the victory sprinting 49 yards to the end zone.

Ramapo became the first New Jersey team with back-to-back 13-0 seasons. It was also their fifth undefeated season in school history. Tirone finished rushed 40 times for 176 yards. DePrima carried the ball ten times for 194 yards while completing 9 of 15 passes for 105 yards. Breslauer was 18 of 29 for 287 yards and three scores.

Jake Tirone on the win: “The offensive line did an incredible job and opened up holes. This team is battle-tested and did whatever it takes. A great group of guys, great leaders and chemistry. I am so proud to be a part of it and the Ramapo legacy. Charles DePrima is an amazing player and I love playing next to him.

Charles DePrima on the victory: “We practiced these plays all week and the O-line did their job and just found the open hole. We knew to keep our heads up and make the adjustments. Jake Tirone is the best player I have ever played with. He’s an amazing leader and has great intensity. He is a skilled football player and I can never ask for a better teammate next to me in the backfield.”

“Coach (Gibbs) told us the before the season you could win any game you play and we answered the bell every week. We did our job and stayed focused. Coach Gibbs is one of the greatest ever. We have an amazing program here and couldn’t be more grateful to be a part of it.”

Drew Gibbs on the regional championship win: “I’m so proud of the players and our coaches. I believe in our process and when the players buy in the way they have over the last decades, great things can happen. I’m real proud of the work people put into it. Everyone cares about the success of the team.”

“Every year, there is a new group sitting in the front of our team meetings. Traditionally the seniors sit in the front row and every year it’s a new group. That is the challenge that guys continue to step up being leaders and taking over the program very. I am proud of our culture.”

Facing off against a potent Union offense averaging near 34 points per game, Ridgewood had their hands full. Farmers quarterback Andrew Sanborn feasted on the defense completing 15 of 23 passes for 157 and three touchdowns as Union led 25-13 at halftime.

After receiving the second-half kickoff, the Ridgewood offense went on a seven-play, 65-yard drive resulting in a nine-yard touchdown run from running back Gabriel Santiago. Late in the third quarter, the Maroons defense came up with a big play as strong safety Harrison Robert recovered a fumble.

The fourth quarter would turn into a scoring fest with the teams combining for 34 points. Thirty-seven seconds into the quarter, a five-yard touchdown run from Reuben Pillai put the Maroons up for the first time in the contest. Three minutes later, Union responded with a two-yard scoring run from Christian Murrell.

Resembling a heavyweight fight, Ridgewood countered on their offensive possession with a one-yard plunge from George Hadfield. Going for the two-point conversion, Pillai caught the conversion making it 34-31 with less than seven minutes remaining. The back and forth scores continued with Sanborn leading an eight-play, 70-yard drive that ate up over four minutes. This resulted in a second touchdown pass to wide receiver Elijah White (143 receiving yards), but the extra point ended up no good leaving the score at 37-31 in favor of the Farmers.

Getting the ball back with 2:20, Pillai busted loose for a 31-yard run moving the ball into Union territory. A 31-yard pass from quarterback Liam Tarleton to wide receiver Tommy Bourque set up first and goal at the five-yard line. With time winding down, Pillai found a running lane for the winning score with 28 seconds to go.

Bourque sealed the Ridgewood (10-2) comeback victory, picking off a Sanborn pass and preventing Union (12-1) from completing an undefeated season. Pillai finished with 154 rushing yards while the Maroons ground attacked piled up 361 yards. Sanborn completed 24 of 37 passes for 335 yards.

Reuben Pillai on the win: “This is one of the greatest days of my life. Last year we came here and lost and now we’re back and we won. During halftime, our coaches let the defense know they were not playing well, and they came out and played a great second half. Our running backs were running through the holes. We knew that we could take it down to their side of the field and score.”

“When they scored with two minutes left, we knew we were not letting that end our season and we were going to win this game. We wanted to come back and get into the end zone and win this game for Coach Johnson. The stuff we do day in and out, we grind every day, and it’s on our wristbands and what we did in this game and ended up with a W. Our seniors were wondering how we would run this year without our head coach who built the offense and defense. We responded and came together and did what he had to do.”