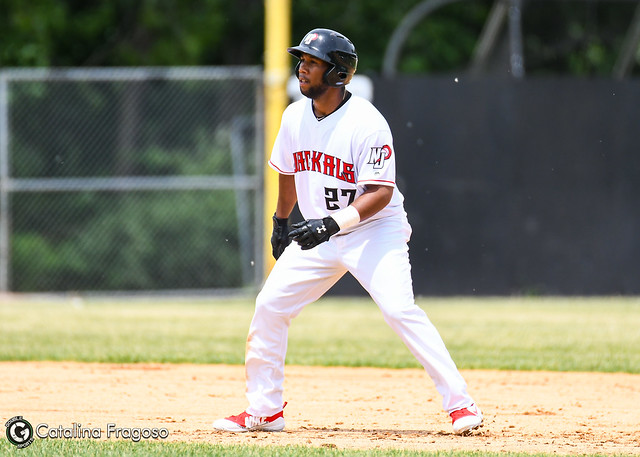 After losing six out of their last seven games, the New Jersey Jackals have gone on a hot streak winning six straight games.

After losing three of four to the Sussex County Miners and getting swept by the Trois-Rivières Aigles, the New Jersey Jackals were in a bit of trouble. Their record stood at an even 31-31 at the time. New Jersey was in danger of dropping out of the third-place spot in the Can-Am League standings that they’ve held for the majority of the season. The Jackals calmed the fears of all their fans over the last week sweeping back-to-back series en route to a six-game winning streak. New Jersey swept Rockland in a three-game series in the middle of this past week. This past weekend saw the Jackals sweep the Ottawa Champions in what was an epic three-game series at home.

New Jersey came out swinging in the first game on Aug. 2. David Harris got it started with a two-run single in the bottom of the first. Santiago Chirino followed up in the bottom of the second by hitting one to right field that got past the glove of Champions right fielder Jiandido Tromp. Two runs scored on the triple before Chirino scored himself on the same play due to an error. Chirino would go 3-for-4 with two RBIs on the night. The Jackals took a 5-0 lead in the first two innings of the contest.

“I’ve been feeling really good at the home plate lately,” said Chirino. “So I’m trying to just keep doing what I do, play for the team. You know try to do the little things. Right now we’re kinda hot. So I’m just trying to get on base because Marte’s driving in a lot of runs on the team. I’m trying to be part of that. You have to know what part of the team is working right now and then work from that. I feel like we’re doing a good job on that; trying to get on base early in the game and we’ll be scoring some runs. So that’s good.”

New Jersey added four more runs in the bottom of the fourth inning to take a 9-3 lead. They would hold that lead the rest of the night thanks to another impressive outing from starting pitcher Brendan Butler. Butler finished the night with seven innings pitched, allowing just one earned run and striking out seven. It was Butler’s third straight start allowing two earned runs or less as well. He’s also struck out at least six batters in three of his last four starts including this one.

In the bottom of the eighth inning, tempers flared a bit after home plate umpire Matt Criss called a controversial strike call on Santiago Chirino. Jackals second baseman Nelson Ward shouted back from the dugout and was thrown out of the game. Ward then went out of the dugout to make his case before leaving the game. Afterward, the Jackals would still go on to win the game by the final score of 9-3.

“That’s good support,” said Chirino on Ward sticking up for him. “When you’ve got teammates like that. They support you. They go at it because they’re making a bad call. So that’s something good. We’ve been playing together and we like a family. So if we play like a family, we’re going to be winning some games.”

Conrad Gregor got the second game on Aug. 3 off with a bang, rocketing one to right for a solo home run. Gregor’s ninth homer of the season got New Jersey on the board first. Along with his presence in the Jackals lineup, Gregor has also been very versatile defensively. He’s a natural first baseman playing 43 games there this season. However, when center fielder Jay Gonzalez went down earlier in the season, Gregor was able to move into the outfield, playing 16 games in left field. Furthermore, when third baseman Emilio Guerrero recently went down, Gregor has seen some time at third base as well, serving nine games as the Jackals third baseman.

“I love it. I love it,” said Gregor on playing several different positions throughout the season. “I love showing up every day and looking at the lineup and saying ‘Oh. Today I’m at third. Oh. Today I’m in left. Oh. Today I’m at first.’ It’s fun. It makes it fun coming to the park. And however I can help the team win, whatever that position is, happy to do it.”

The Jackals would go on to add three more runs in the next four innings. Richard Stock knocked a single to score David Harris in the second. Harris followed up with an RBI single himself scoring Gregor in the third. Last but not least, Nelson Ward scored from third on a wild pitch in the bottom of the fifth.

New Jersey received outstanding pitching from their starter and relief pitchers. Starting pitcher Luis Castilo had his best outing of the season, pitching six innings allowing one run (0 earned) while striking out seven. It was the fewest runs and earned runs he’s allowed in a start all season. It’s also the third time he’s struck out seven batters in an outing. Reece Karalus came in out of the bullpen and pitched a scoreless top of the seventh. Dylan Brammer pitched a scoreless eighth and ninth inning with two strikeouts to close it out. New Jersey defeated Ottawa by a final score of 4-1 and clinched the series victory.

“Yeah it’s great. Like how our team is competing right now day in and day out,” said Conrad Gregor. “Really setting the tone on the mound. Beginning each game coming in three up, three down. And one through nine man we’re clicking on all cylinders right now. It’s fun.”

While winning the series was good, sweeping the second series in a row would be huge. That’s precisely what the Jackals would try to accomplish in the rubber game on Aug. 4. However, they would not get off to a good start. Ottawa would score five runs in the first four innings. Jiandido Tromp drove in two and went 1-for-4 on the day. Maikol Gonzalez drove in one as well with a single in the top of the second as he would go 3-for-5 on the day.

Throughout the season, the Jackals has had a knack for coming down from behind. This game would end up being no exception. In the bottom of the seventh inning, the Jackals bats exploded. Demetrius Moore got it started with a two-run double with the bases loaded to get his team on the board. Nelson Ward then hit a sacrifice fly for the second out of the inning, but also pulled the Jackals within two. Santiago Chirino singled to score Moore to pull the Jackals within one. Two at-bats later, Alfredo Marte lined one into center field to score Chirino as New Jersey came all the way back down five to tie the score at 5-5.

“Man, honestly man what it feels like is that guys are just honestly taking one pitch at a time man,” said David Harris. “Really, I think today it showed what kind of character we have. And also the fact is I think is that we just believe and trust in each other. And I’m starting to see, you’re starting to see the chemistry and belief in each other.”

After Marte tied the game, David Harris came to the plate with a chance to give the Jackals the lead. He would accomplish just that. Harris hit a deep fly ball to right-center field that bounced off the wall for a two-run single. As a result, New Jersey completed the comeback to take the lead. Nelson Ward gave the Jackals some insurance in the bottom of the ninth with a two-run triple. New Jersey would go on to win the game 9-5 in an epic comeback victory to complete the series sweep. It is the second series sweep in a row for the Jackals to give them a six-game winning streak.

“I think in that at-bat, in my mind it was just like ‘I’m gonna get it done.’,” said Harris on how he rode the momentum the Jackals had created during hit at-bat where he got the go-ahead two-run hit. “Speaking it to existence. Didn’t matter how. Didn’t matter what pitch. Just in my mind, I knew if I did it, the guy behind me would. So that was trying to be careful, aggressively smart, and just get a good pitch to hit really. And so good things happen just having that thought process. And my thought process is just helping the team win.”