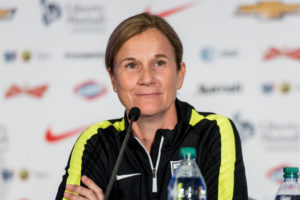 Just about 10 days ago, there were rumors that Jill Ellis was on the verge of losing the respect of her players.

On www.soccerwire.com, Charlie Boehm wrote in his article, https://www.soccerwire.com/news/global/uswnt-good-enough-is-good-enough-but-something-is-amiss-in-womens-world-cup-run/ , that he had heard whispers about issues in the lockerroom after the 2-0 win over Colombia.

Based on what knowledgeable sources close to the team tell me, you can also factor in a simmering set of behind-the-scenes stresses that are difficult to pin down, but undoubtedly influential. Most of it is highly sensitive and impossible to verify, but I hear whispers that: Morale is down – way down – and Ellis has lost the respect, and perhaps even the buy-in, of as much as half the roster.

The team’s elementary style of play has even drawn mockery from players themselves, with one jokingly referring to the USWNT’s “[expletive] tactics” in text messages with club teammates.

He went on to quote Michelle Akers who stated, “Our players are talented, it’s the lack of quality coaching and shortcomings in the setup that are holding us back”.

A little over a week later, Ellis didn’t let her ego get in the way of fixing these issues.

Instead of Abby Wambach as the focal point of the offense and playing a plain vanilla 4-4-2 with long balls in and high crosses being the game-plan, Ellis listened to her players and the criticism and changed her approach.

She went with Amy Rodriguez up front to press China, and then went to a 4-3-2-1 with Alex Morgan as the lone target forward to attack Germany.

In both games, Carli Lloyd was in more of an attacking role and linkup play through the midfield was finally evident in the US soccer team.

So, you can criticize Jill Ellis for a lot of things but being stubborn is not one of them.

It was her willingness to be flexible in her tactics and to change when it was warranted that has the USWNT peaking at the right time and on the verge of bringing the World Cup to the United States.

USWNT Have Chance at Redemption against Japan
Mission Accomplished, USWNT have First World Cup Title Since 1999